The European Union (EU) Rail Freight Corridor ‘Amber’ (RFC AMBER) is one of 11 EU Rail Freight Corridors (RFCs) in Europe set up gradually between 2013 and 2020 to facilitate cross-border rail freight. RFC AMBER played a pivotal role by being the first EU RFC that was voluntarily established on the initiative of member states. Here, Dr. Gerhard Troche, Managing Director of RFC AMBER, explains more about the corridor’s value in the overall network of RFCs and what the next steps are to improve its development. 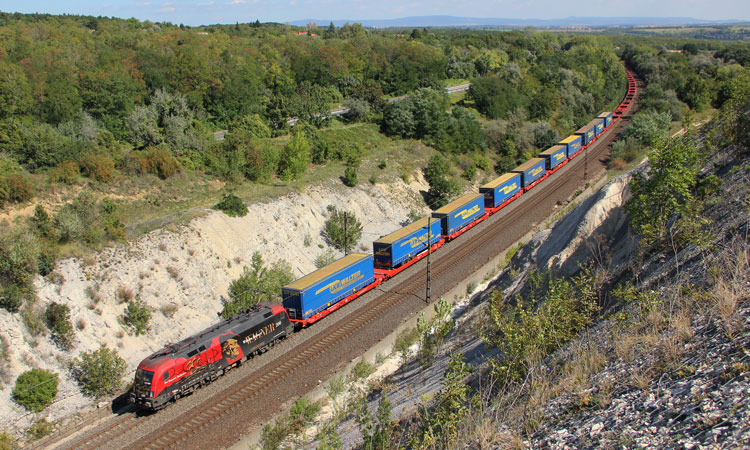 Following a joint proposal by the four countries along the route of the corridor – the Republic of Slovenia, Hungary, the Slovak Republic and the Republic of Poland – the European Commission (EC) approved in 2017 the setting up of RFC AMBER through Commission Implementing Decision 2017/177, granting a period of two years to make the corridor operational. The initiative for setting up RFC Amber was supported by the rail freight community; railway undertakings, intermodal operators and terminal managers – the future customers of the corridor; and by the infrastructure managers and one rail capacity allocation office concerned. RFC AMBER set up its Corridor-One-Stop-Shop (C-OSS) to handle capacity requests and, in January 2019, published its first offer of pre-arranged train paths (PaPs) as the last step to make the corridor operational, slightly ahead of the legal deadline set by RFC‑Regulation (EU) 913/2010. The grand opening event in September 2019 in Koper, in the presence of the then EU Transport Commissioner, Violeta Bulc, gathered many high‑level representatives from the countries’ Ministries, members and customers of the corridor.

The corridor is managed through a cooperation of the railway infrastructure managers SŽ-I (Slovenia), GYSEV and MÁV (Hungary), ŽSR (Slovakia), PLK (Poland) and the Hungarian Rail Capacity Allocation Office (VPE). The namesake of the corridor is the legendary medieval Amber Road, whose route it largely follows and which it revives in the form of a modern corridor for rail freight, adapted to the needs of environmentally friendly transport and logistics.
The important contribution of the corridor to key EU policy objectives in the field of transport and railway policies is also underlined by the fact that its governance is supported by a ‘Program Support Action’ under the Connecting Europe Facility.

Closing gaps in the corridor network

RFC AMBER closed some important gaps in the network of European RFCs: it directly connects the Slovenian Adriatic seaport of Koper with important destinations in Hungary and Slovakia; with its growing business and remarkably high market share for rail in hinterland traffic of more than 50 per cent, the port is an important generator of traffic on the corridor. RFC AMBER also incorporates into the network of RFCs on the North-South freight axis through Western Hungary – the second-most important rail freight axis in Hungary in terms of freight volume. Thanks to electrification and other improvements in the past decade, it has become increasingly attractive and has seen traffic growing; it provides a flat North-South route just east of the Alps, ideally suited for freight, with an uninterrupted P400-profile that is important for intermodal traffic. RFC AMBER is the first RFC linking the eastern parts of Poland, Slovakia and Hungary and connecting at the Hungarian-Serbian border at Kelebia to the Transbalkan-route towards South-Eastern Europe, which gradually is regaining its role as an important international freight artery. At the eastern border of the EU at Terespol, at Slawkow in Upper Silesia and in the vicinity of Kosice in Slovakia, the corridor links to Euro-Asian rail land-bridges, which see steadily growing transport volumes.

RFC AMBER provides a fully electrified principal route over an end-to-end distance of approximately 1,400km; including all branches, the overall line‑length of the corridor is roughly 3,300km. Important parts of the corridor are today not covered by the TEN-T Core Network; the Ministries’ commitment to the corridor and the infrastructure managers and capacity allocation office’s common work to develop it are, therefore, of even higher value for the countries, economies and regions concerned. RFC AMBER has become the corridor connecting the heart of Europe! 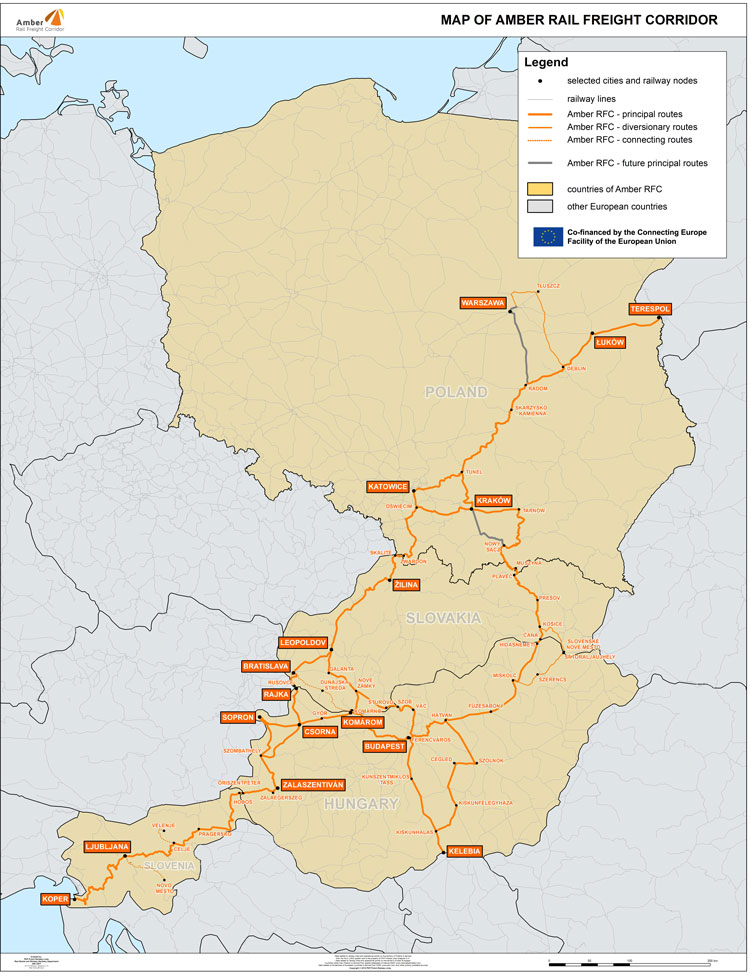 Active member of an integrated network

RFC AMBER is an active member in the network of RFCs and is fully included in the Customer Information Platform (CIP) of RailNetEurope. From October 2019 until February 2020, RFC AMBER chaired the RFC Network, the European-wide cooperation platform of all EU RFCs.

RFC AMBER is highly integrated in the network of corridors even geographically, connecting to six of the 10 other RFCs: to RFC North Sea‑Baltic in Poland; to RFC Baltic-Adriatic in Poland, Slovakia and Slovenia; to RFCs Orient/East-Med and Rhine-Danube in Slovakia and Hungary; to RFC Mediterranean in Hungary and Slovenia; and to RFC Alpine-Western Balkan in Slovenia. The corridors work closely together, aiming to find harmonised solutions and to be able to handle the traffic of customers using several corridors.

While important achievements have been made, RFC AMBER members are fully aware that further improvements are necessary to meet the growing expectations of customers and stakeholders. One of the first steps of the newly established corridor was, therefore, to launch a ‘Bottleneck Study’, systematically analysing the infrastructural, operational and administrative bottlenecks that are hampering traffic along the corridor today. The Bottleneck Study was finalised in December 2020 and can be downloaded from the RFC AMBER website. The study confirms the need to progress on the implementation of the TEN-T minimum infrastructure requirements, in particular with regard to a train length of at least 740m, and to address operational and regulatory issues in border sections. A specific challenge of RFC AMBER is its longer sections of single-track, such as in Eastern Slovenia and Western Hungary. Furthermore, in a number of locations, freight trains have to change their direction of travel, sometimes several times over relatively short distances. Some projects to improve the situation are already on the way, such as a triangle track in Zalaszentiván in Western Hungary. However, further measures may need to be considered in order to address this challenge. The outcomes of the Bottleneck Study will certainly also feed into the RFC AMBER Action Plan, which has been set up by the corridor in close cooperation with its Railway and Terminal Advisory Groups (RAG-TAG).

The establishment of RFC AMBER has already proven its value by closing key gaps in the network of RFCs, thereby increasing the overall coverage of the European rail network for competitive freight and strengthening its resilience in case of disruptions in other parts of the network.

RFC AMBER has now left its phase of establishment and entered into a phase of development, with the focus shifted from ‘putting the corridor on track’ towards improving and developing the corridor in line with customer needs. For this purpose, RFC AMBER is currently in the process of defining new projects, in many cases jointly with other RFCs, and also with the possibility for customers and stakeholders to become involved as project partners. This will strengthen the cooperation between corridors, as well as the cooperation with customers and, not least, the integration of terminals.

The commitment of member states, as well as the effectiveness of the common work of the RFC AMBER infrastructure managers and capacity allocation office, supported by feedback from our customers, confirms that there is a need – and also ambition – to develop the network of lines belonging to RFC AMBER further. It would, therefore, only be reasonable that this will also be reflected in the on-going revision of the RFC‑Regulation, the TEN-T guidelines and possible future extensions of the core network.

Since March 2019, Dr. Gerhard Troche has been the Managing Director of the international EU Rail Freight Corridor ‘AMBER’. Between 2010 and 2015, he worked as an expert at the European Commission (DG MOVE) in Brussels with European rail freight policy, supervising the implementation of the EU Rail Freight Corridors and managing several studies on European rail transport and rail freight infrastructure. Gerhard has also worked for many years as Senior Scientific Researcher in rail freight and passenger transport at the Railway Group of the Royal Institute of Technology Stockholm (KTH) in Sweden, where he was project manager in EU Shift2Rail R&D projects. His research interests cover automation/ digitalisation in rail freight, intermodal transport and high-speed rail. Furthermore, he holds an assignment as Senior Advisor – International Projects at the Hungarian-Austrian railway company GYSEV/Raaberbahn, which is a member of three EU RFCs. Gerhard obtained a PhD degree at KTH in Stockholm in 2009, with a dissertation in the field of  rail freight. 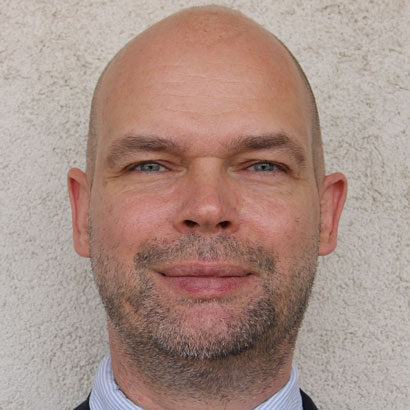