In this article, the Community of European Railway and Infrastructure Companies’ (CER) Alberto Mazzola, Executive Director, and Ethem Pekim, Head of Economic Policy and Sustainability, argue that the EU climate and energy policy portfolio must include a robust carbon pricing component and inform transport users about their choices to effectively tackle the GHG emission gap, which is needed for a green recovery. 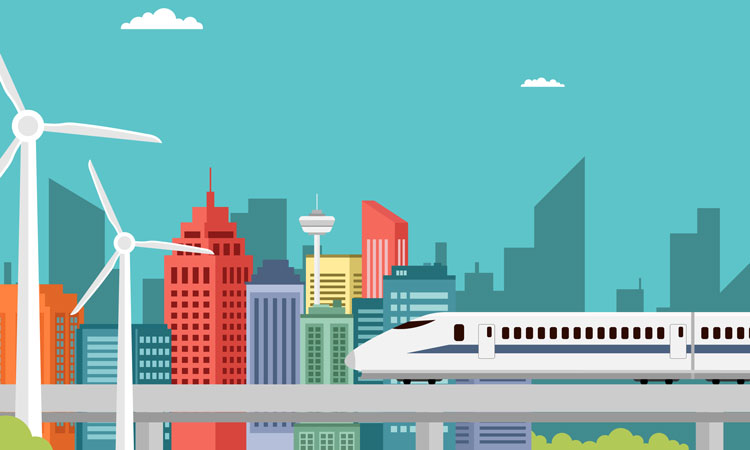 The COVID-19 pandemic represents an opportunity, but also a risk, in transitioning towards a climate neutral mobility in the EU by decoupling economic growth from GHG emissions in a moment when economic growth is deeply needed.

Figure 1 also depicts that rail is already Green Deal compliant for the 2030 perspective. Rail continues to improve its carbon intensity (per passenger and tonne kilometre) and remains closest to zero emissions according to the European Environment Agency (EEA). Looking at their data from 2014-2018, the EEA concludes that the train is the most CO2 efficient mode. Rail’s CO2 is largely driven by the national electricity mix, which is de facto covered by the EU ETS, so rail’s emissions are fully compliant with a carbon price in line with the user pays and polluter pays principles. The EEA fully confirms the assumptions underpinning the EU’s modal shift policy. 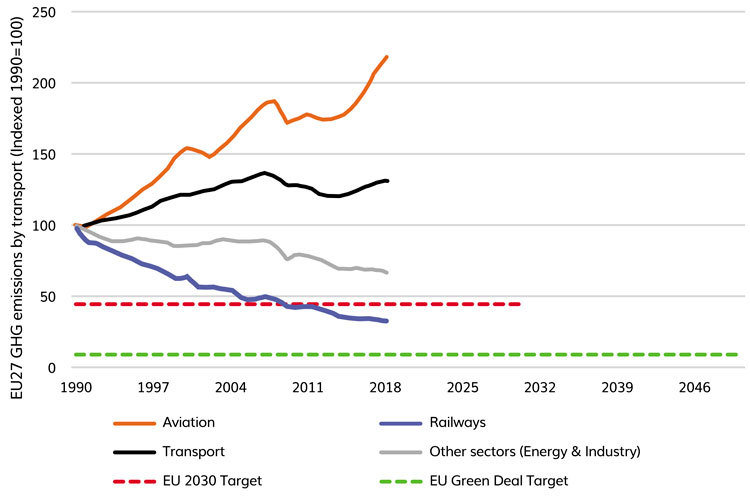 Figure 1: Only railways are on track to deliver the EU Green Deal’s 2050 target. Credit: Eurostat

For rail transport, the top priority has been to increase energy efficiency and reduce its CO2 emissions. The European railways collectively committed to reducing CO2 emissions per passenger-kilometre and per tonne-kilometre by 50 per cent by 2030 and are well on track to meet this target. Rail complies with the ‘energy efficiency first’ principle. Rail companies are renewing their rolling stock in order to lower their energy consumption. Overall, this approach perfectly matches with the EU sustainable finance agenda since railway investments find a business case with Green Bonds. Innovative technologies such as regenerative braking is introduced to recover and reuse energy in the rail system. Companies are also implementing energy-efficient driving techniques by training train drivers and introducing new command and control technologies. This builds on a close monitoring of energy consumption thanks to the installation of energy-meters on trains.

Railways rely heavily on electricity to decarbonise. Four out of five trains in Europe already run on electricity, with one third coming from renewables. According to the International Energy Agency (IEA), oil consumption in railways will fall to almost zero in 2050. It will be replaced mainly by electricity, which is to provide over 90 per cent of the rail traction needs and by hydrogen which provides another five per cent. More traffic on rail will mean a substantial drop in transport CO2 emissions.

Requirements for GHG reductions start with transport mode switching, which includes a shift to active transport (cycling and walking), public transport and ride-sharing instead of single occupied private cars, as well as substituting high‑speed rail and night trains for air travel. For freight, a substantial part of the 75 per cent of inland freight should move by rail. Such behavioural changes will deliver cost-effective emissions reductions. According to the IEA, behavioural changes reduce emissions by 50 per cent in 2050 despite reducing flights by only 12 per cent. IEA found that 15 per cent of short-haul flights can easily be shifted to existing rail infrastructure and by 2050 17 per cent could be shifted. This will require public acceptance that can only be achieved by informing transport users about their carbon footprint. It would also require new infrastructure such as high-speed rail networks to connect major cities in Europe and a new fleet. It must be noted that this change will impact lifecycle emissions. Reduced car ownership is to lead a drop in steel demand, which in return will be taken by rail infrastructure.

An important component of the policy mix to achieve the behavioural change needed for GHG reductions is pricing. This can play a pivotal role in encouraging users and polluters to reduce their travel activity and to incentivise more sustainable travel choices. The policymakers can use market‑based instruments to set a carbon price for achieving GHG reductions at the lowest cost to society. Taxation based on the carbon content of fuels is also an option.

The EU, with the ‘Fit for 55’ package, is currently reviewing its climate and energy policies for 2030 onwards. The reforms of the EU Emissions Trading Scheme (ETS) and the EU Energy Taxation Directive, both provide a basis for implementing a robust EU-wide carbon pricing. For aviation, the current scope of the EU ETS only covers flights within the European Economic area, which corresponds to one third of CO2 emissions from EU aviation.

Furthermore, the current system offers 85 per cent of the allowances free to airlines, which also benefit from an energy tax exemption for kerosene. Road transport fuels are currently out of the scope of the ETS and are subject to fuel taxes at national level. Even on major roads, distance-based charging is only applied to trucks on approximately 20 per cent of the network. Road pricing rules in the EU are taking only very small and gradual steps to comply with the user-pays and the polluter-pays principles. The priority for the EU should be to avoid the current patchwork of carbon pricing at EU-level. This requires an ambitious implementation of existing rules such as the Eurovignette Directive, but also an introduction of a separate ETS for transport fuels with a price control mechanism. Aviation should no longer receive free allowances under the ETS and fossil fuel subsidies in transport must finally end by taxing kerosene and high‑carbon fuels. Finally, all electric modes should be treated equally for charges.

Wider application of carbon pricing will raise revenues. In 2019, Member States generated €14 billion from auctioning ETS allowances. ETS expansion to road transport could bring in an additional €50 billion a year at the current prices. The ETS revenues should be used for promoting sustainable mobility according to the internalisation of external costs. The revenues will be a valuable resource for achieving political feasibility for carbon pricing. Until now, less than five per cent of the revenue generated by the ETS and fuel excise duties are allocated for such purposes. The ETS reform should be consistent with the targets of the EU Mobility Strategy and allocate a substantial portion of the revenues to develop railway infrastructure and modernise fleet in the next decade.

In addition to pricing measures, information on GHG emissions of journeys needs to be communicated to consumers assist them to make well informed choices for their mobility. With no delay the European Commission (EC) should work on an ecolabel for transport services. This should ideally be based on an EU harmonised carbon-footprint methodology and apply to all transport modes. 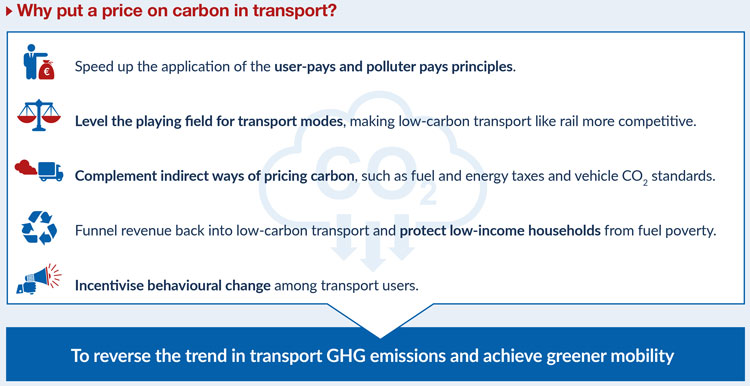 Smart and sustainable transport for the future

As a way of responding to changing mobility patterns, the rail sector is committed to contribute to door-to-door mobility including the promotion of active modes and intermodality, with rail as the backbone of sustainable mobility. It will be of strategic importance to have high-speed rail connections to all European capitals and major cities, including major airports. With this, domestic flights could very well be taken over by high-speed rail and the capacity of the airports could be allocated to longer distance flights. Check-ins could be performed at the rail stations in order to offer a smooth intermodal passenger experience.

Digital-based business models such as Mobility as a Service (MaaS) can help to increase options for travellers, whilst supporting the shift towards more sustainable transport modes. Railway companies are open to collaborative economy and work with partners to offer door-to-door services, which will be essential in delivering the target of making all journeys within the EU of 800km or less climate neutral by 2030.

Alberto Mazzola has been the Executive Director of the CER since 1 January 2021. He holds a Master’s in Business Administration and a Doctorate cum Laude in Nuclear Engineering from the Politecnico of Milan. In 2002, Alberto joined Ferrovie dello Stato Italiane (FS), where he held different positions. In his last role as Head of International Government Affairs, he was based in Brussels, dealing with international affairs and European legislation, market regulation and technical standards. Before joining FS, he contributed to the worldwide business section of Leonardo Finmeccanica (1988- 2002). Active in the European Economic and Social Committee (EESC) since 2015, Alberto was Vice-President of the Transport, Energy and Service of General Interest Section and President of the International Trade Agreements Follow up Committee until September 2020. He has been serving as Member of the EESC’s Consultative Commission on Industrial Change, representing CER, as well as Business Europe, since January 2021. Alberto has been a member of Global Railway Review’s Editorial Advisory Board since January 2021.

At the CER, Ethem Pekin is responsible for the EU Green Deal. Prior to joining CER, Ethem was in charge of intermodal transport policy assessment as a research associate at the Free University of Brussels, where he obtained his PhD in Applied Economics.