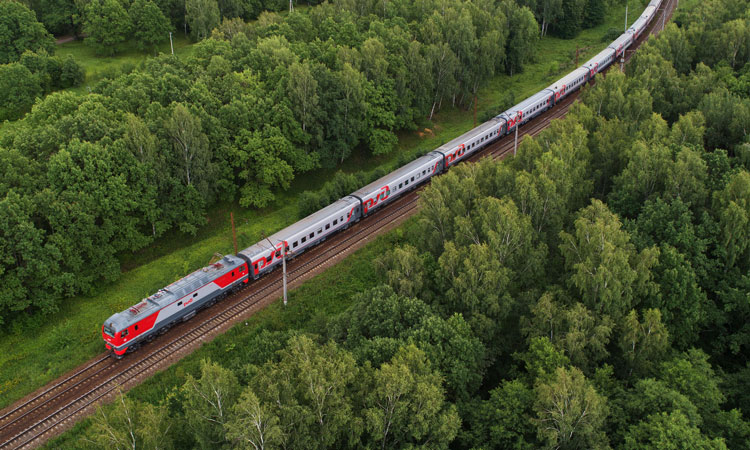 A member of the International Union of Railways (UIC), in 2015 we adopted the Declaration on Uniting to Solve Climate Change Problems and, in 2020, made commitments to strive to achieve carbon neutrality by 2050.

Over the past several years, thanks to advanced scientific and technical developments, we have been a world leader in terms of energy efficiency in freight and passenger transportation, and this has been recognised by independent foreign institutes.

Our work on using clean energy in production is being manifested in the electrification of railways and the use of renewable energy sources.

We are increasing cargo transportation on electric traction.

In our General Scheme for the Development of Railways, the priority is electrifying high-traffic areas currently operating with diesel traction. Measures to replace diesel fuel with electric energy, taking into account the growth in total cargo turnover by 2025, will reduce its share on diesel traction, leading to a reduction in diesel-fuel consumption and a decrease in greenhouse (GHG) emissions by approximately six per cent (458,000 tonnes of CO2e).

Along with electrifying rail lines, we are working to improve the efficiency of electricity usage for train traction and more.

We are also working on the use of renewable energy sources. Since 2008, under the ‘Introduction of Resource-Saving Technologies in Railway Transport’ investment project, we have been replacing small diesel and coal-fired boiler houses with heat pumps that take in heat from the environment and do not produce any emissions into the atmosphere or soil in order to reduce operating costs, as well as pollution. We have installed more than 100 such pumps so far and, in 2021, we have already examined and selected over 50 more facilities where we can get rid of coal-fired boiler houses and replace the heat source with heat pumps.

Our first solar power plant with a capacity of 30.7kW was built in 2019. At present, its efficiency is being monitored and, based on the results, it will be decided how feasible it is to replicate it.

We are also working on the use of solar generation to power facilities, both as the main supply and as a backup source. Signalling control posts and crossings are the main sites that will be powered by energy from solar modules, and more than 170 such objects have been selected.

Of course, there are other measures we are taking to reduce any negative impact on the environment.

Our updated technical requirements for traction rolling stock have made it possible to build electric locomotives and trains with improved energy characteristics. This made it possible to increase the amount of green energy recuperation: when braking, locomotives and electric trains themselves work as power plants and feed electricity to the grid. Over the past six years, such green energy has grown by 29 per cent, reaching 2.6 billion kWh in 2020. The most efficient indicators of energy recuperation have been achieved in the Moscow Central Circle, where in 2019-2020, 50 per cent of the energy powering Lastochka electric trains was recovered.

In order to reduce pollutants, medium-term plans have been drawn up to replace oil-filled transformers and high-voltage switches with dry ones.

In regard to heat and water supply, we consider it important to switch diesel boiler houses to natural gas.

We are acquiring modern rolling stock that meets all current environmental requirements. At the same time, the scientific sector of RZD is working on creating rolling stock with minimal noise and emission levels.

There are still passenger rail routes in Russia that run partially along non-electrified lines, and it is important that such routes feature modern trains that are comfortable for passengers and environmentally safe. This problem will be solved by a new multi-unit rolling stock that will be able to operate both on electrified tracks and on tracks without electrification: we have already developed and approved technical requirements for hybrid electric trains with the possibility of autonomous battery traction.

We also plan to start using hydrogen-fuel-cell passenger trains, and the island of Sakhalin will become a pilot testing ground for them. Other regions where hydrogen technologies can be introduced in railway transportation are also being considered, first and foremost resort and tourist regions, ecologically clean zones, and large cities.

We are also working on replicating this technology for use at stationary RZD facilities, in hand tools, and on various types of railway rolling stock (shunting locomotives, trains for children’s railways, electric trains, locomotive-hauled passenger cars, and track-laying trains).

In addition, we are making innovations in the use of liquefied natural gas as a vehicle fuel. By 2030, we plan to replace 25 per cent of diesel fuel consumed by autonomous locomotives with natural gas, and not only through the development and procurement of new locomotives. We have started modernising shunting and mainline diesel locomotives to operate on natural gas.

Thus, RZD is ready to exchange experience on the use of alternative fuels on railway rolling stock and infrastructure.

Instrumental control is carried out by 56 stationary environmental laboratories, 11 wagons and 53 automobiles. All laboratories are accredited in the national accreditation system and licensed to operate in the field of hydrometeorology and related areas. Emissions from mainline and shunting diesel locomotives, as well as other track equipment, are monitored by 108 environmental control points.

We have our own automated control system ‘Ecology’, which helps accumulate and analyse information on the results of control and monitoring. Now this system has about 9,000 users. We plan to integrate it into the automated state system of environmental monitoring, and we are already working on this issue with federal ministries and departments.

Sergey Kobzev began his career as an assistant electric locomotive driver at the Ryazan Locomotive Depot of Moscow Railway. In 2003, he joined JSC Russian Railways (RZD) as Head of the Locomotive Department. Since then, he has held many roles within RZD, its units and subsidiaries. In his current role he is responsible for environmental protection issues, reduction of the carbon footprint and ensuring compliance with international sustainable development standards.