Foreword: Providing a firstclass service in the heart of Europe

Since its last elections which took place in October 2013, Luxembourg has a new government and I am very happy to be in charge of Infrastructure, Sustainable Development and Mobility. As a matter of fact, sustainable development is a significant factor of the Luxembourgish governmental programme and we will take a close look at how to guarantee the coherence of the different sectors with a view to reach the priorities and objectives fixed among others in the second national plan for sustainable development.

This sustainable development is conditioned by an interaction of economic, social, cultural and ecologic dimensions while conciliating the legitimate interests of the present and future generations. The new government will give high priority to the elimination of bottlenecks which currently hamper both professional and recreational mobility. The aim is to give public transport a higher priority. In this respect a local integrated transport strategy called ‘Gentle Mobility’ will be considered which aims to promote walking, cycling and public transport and to limit car use.

The government will also give high priority to the development of the country’s rail network, tramway network, plus all related infrastructures.

Concerning the specific development of the railway network, priority will be given to the construction of the new railway line between Luxembourg City and Bettembourg, thus doubling the capacity of this highly used line which is also part of Rail Freight Corridor 2.

In order to improve the quality of life for the citizens of Luxembourg and to increase the use of public transport against private motorised traffic (25/75%) emphasis will be given to the development of intermodal platforms as well as park and ride schemes on the main corridors around Luxembourg City.

The government strives to consolidate the concept of cross-border as well as international railway connections in order to guarantee the connection of the Luxembourgish railway network to the European railway system.

As to our connections to France, I highly appreciate the excellent offering to Paris by six TGV journeys per day. In this respect we are looking forward to the commercial start of the second phase of the ‘LGV Est européenne’, guaranteeing us four TGV journeys per day between Luxembourg and Strasbourg.

The putting in service of the high-speed connection to Strasbourg will be the realisation of the first part of the EuroCap-Rail project which endeavors to improve the rail interconnection of the three European cities – Brussels, Strasbourg and Luxembourg – through the modernisation of the railway infrastructure and the running of comfortable high performance trains. Discussions will have to be led on with the Belgium Government in order to address the unsatisfying situation between Luxembourg and Brussels; specifically concerning the long journey times.

Concerning the connection to Germany, we have reached an agreement to improve the infrastructure capacity on the German border between Igel and Igel-West by doubling the capacity on a 2km-long section, thus improving the punctuality and enabling us to run more trains on our only physical direct train connection to Germany. Starting on 14 December 2014, Luxembourg will be integrated in the so-called ‘Rheinland-Pfalz Takt 2015’ guaranteeing an hourly direct connection to Koblenz by modern double-deck ‘KISS’ series trains from Stadler.

The development of alternative transport modes, and in particular on massified transport links, is one of the major transport politics issues in Europe.

Luxembourg is considered as being situated right in the heart of Europe on one of the best positioned freight corridors – Rail Freight Corridor 2. With Luxembourg being strategically well-positioned to organise its freight traffic, the Luxembourgish Government proactively promotes the country as an international hub for logistics in Europe.

Being encouraged by the success of the logistics centre in Bettembourg which is developing very fast, the success of such logistics solutions requires more space in order to be able to develop properly and offer adequate solutions in that field.

In a nutshell, the new terminal will offer four railway tracks each 700m-long and providing a total capacity of 300,000 containers per year, whereas the rail-road part of the terminal will offer two platforms each 700m-long and a total capacity of 300,000 semi-trailers per year. Thanks to the blend between environmental protection, performance and also the needs of our customers, Luxembourg offers a first-class logistics service right in the heart of Europe.

With the ambition to take into account the need to protect the environment, I will push to encourage and promote the use of the railway as the first mode of choice for both passenger and freight needs. 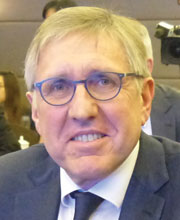