Crossrail’s Sustainability Strategy, published shortly after construction began in 2009, cemented the project’s aspiration to be much more than a railway. As a publicly-funded infrastructure project – the largest in Europe – Crossrail had the opportunity to make a positive contribution to the UK’s sustainability objectives by promoting sustainable transport choices and a sustainable pattern of growth in London and the South East. For Global Railway Review, Rob Paris, Head of Sustainability and Consents at Crossrail provides further details on the project’s sustainability vision and achievements so far. 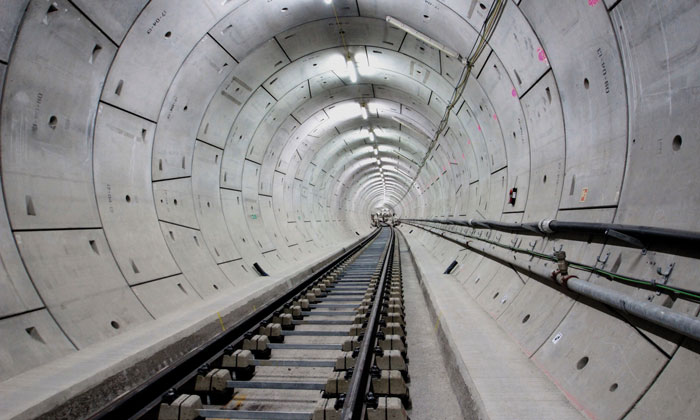 Crossrail’s Sustainability Strategy focussed on the delivery of the new railway – how it would be designed and constructed – and sought to provide a platform for it to be operated sustainably.

From the outset, Crossrail’s definition of sustainability was inclusive and far-reaching with seven themes (as shown in Figure 1) based on those of its two sponsors, Transport for London (TfL) and the Department for Transport (DfT). 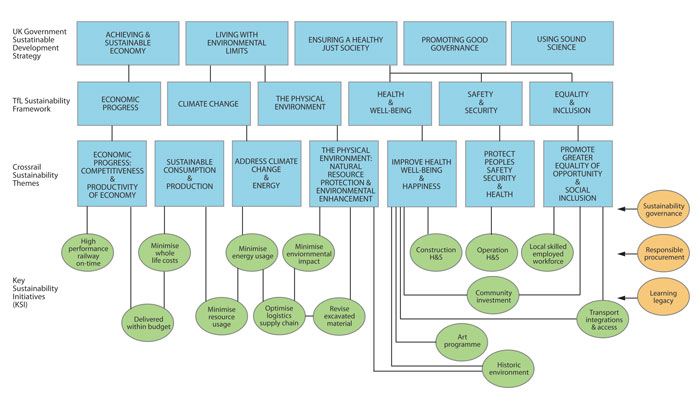 Key sustainability initiatives were established, with the idea that the successful delivery of each initiative would lead to the sustainable delivery of Crossrail. Objectives and targets were set, but when no relevant benchmark data was available the approach was to either use informed judgement to select a nominal target, or an objective was set with a view to establishing benchmarks for use by future projects.

As Crossrail passes the 80% complete mark, the project can begin to take stock of how far it has achieved its sustainability targets. A full report would require a lot more space than an article such as this, but the following gives a snapshot of progress on five of the themes:

To maximise the regeneration benefits of the new railway, Crossrail worked closely with TfL and local authorities to improve the public spaces around the new stations to make the end-to-end customer experience better.

The profits from property developments above some of the new stations form part of the funding package – reducing costs to the taxpayer. Crossrail is supporting the delivery of three million square feet of high quality office, retail and residential space. Independent research projects that Crossrail will unlock or accelerate the supply of some 57,000 homes and 3.25 million square metres of commercial space, adding £35.5 billion to property values in London.

Crossrail has also sought to share the economic benefits with businesses across the UK by ensuring all opportunities are made widely available. Crossrail actively engaged with the supplier community organising events around the country, mapping the geographic locations of Crossrail contracts, actively targeting those areas of the UK where few contracts had been awarded and requiring its principal contractors to use a website open to all, named ‘CompeteFor’. As matters currently stand, 96% of work has been won by UK companies (62% of which were based outside London) and 62% of ‘tier one’ contractors and 76% of ‘tier two’ suppliers being SMEs.

Crossrail set a target that at least 15% of total material value should derive from reused and recycled content in new construction and aimed for 20%. During the design phase, work was undertaken on specifications that included recycled material and contractors were required to identify further opportunities during construction. The combined efforts from design and construction have resulted in Crossrail currently achieving almost 33% of recycled content.

The construction of 26 miles of tunnels, shafts, caverns and 10 new stations was inevitably going to generate waste and excavated material. Crossrail committed to implementing the waste hierarchy to reduce, reuse and recycle waste and where reasonably practicable, remove that material by rail and water transport. Early projections indicated that on a tonne-per-kilometre basis, 85% of excavated material might be transported by rail and water and now, with major excavation complete, a figure of 80% has been achieved. Crossrail signed up to the ‘Halving Waste to Landfill’ campaign and set targets for waste recovery:

Most of Crossrail’s carbon emissions (79%) will be from operation, as opposed to construction (21%). The majority of operational CO2 will be from rolling stock operation (80%), while 20% of emissions are attributable to stations.

Given the significant contribution of the rolling stock to Crossrail’s carbon footprint, targets were set for weight and energy efficiency as part of the procurement for the rolling stock and depot contract. These targets were 350 tonnes unladen weight per 200m train and 24kWh/train, respectively. The last figure equated to 55g CO2 per passenger kilometre, based on 2011 projections of passenger demand and train service patterns.

Bombardier was awarded the depot and rolling stock contract in 2014 and has not only met, but significantly exceeded the weight target, achieving just under 319 tonnes unladen weight. Information from Bombardier thus far indicates that the energy efficiency target will also be met, but there is currently insufficient test data to identify what the final outturn figure will be.

At the start of construction, Crossrail set a target of reducing its construction-related carbon emissions by 8% and with over 80% of construction completed, it is achieving approximately 15%. This represents a cost-saving of £2 million through efficient fuel and electricity usage.

Given how this impacts directly on the communities living and working around Crossrail’s sites, noise has arguably been the greatest environmental challenge during construction. If all the environmental complaints received by the Crossrail Helpdesk for the central section since 2010 are put together, 92% of them have been about construction noise. Crossrail required that all of its contractors had to obtain approval from the local authority under the Control of Pollution Act before work began to help drive high performance noise management. In addition, a supplier performance measurement system was developed, which included a matrix for assessing noise management that scored contractors on a rating scale ranging from an assessment of basic compliance through to exemplary performance. Over time the majority of Crossrail’s contractors reached top level performance, however as construction continues, noise continues to be a challenge which our contractors and community relations team manage very closely.

Crossrail was the first UK infrastructure project to set out requirements for emissions control on construction machinery in its contracts to bring about environmental benefits. An initial survey in 2012, after most of the major contracts had been awarded, identified that less than 40% of all the construction plant and equipment was fitted with diesel particulate filters or cleaner Euro Stage IIIB engines. Wo rking with its contractors, Crossrail initiated a campaign to identify the issues that were inhibiting achieving these requirements and resolve them. By 2017, 88% compliance has been achieved.

Crossrail has identified several opportunities for supporting biodiversity and mitigating any habitat loss caused by its construction. On the surface sections a target of no net loss has been set and Network Rail is working on schemes with local stakeholders to deliver it. The central section works contributed over three million tonnes of excavated material to the creation of part of the RSPB’s 1,500 acre wildlife habitat at Wallasea Island, delivering one area of the project: Jubilee Marsh. Since the creation of the habitat in September 2015 a recent survey identified 29 species of birds out of a total count of 7,839 individuals at Jubilee Marsh, alone. Given a total count for Wallasea Island of 36 species and 12,096 individuals this clearly demonstrates the significance of the contribution Jubilee Marsh is making to the Wallasea Wild Coast project as a whole.

Since the start of the project, Crossrail’s principal contractors have been required to deliver at least one skill or employment-based outcome for every £3 million of tendered contract value as part of individual contractual agreements. These include job starts by previously unemployed people, apprenticeships, graduate traineeships and work placements. The target of 400 apprenticeships created during the construction of the railway has been surpassed with over 650 apprentices currently recruited.

Crossrail also operated a jobs brokerage service delivered in partnership with Jobcentre Plus. It also championed several initiatives to improve skill development and employment opportunities for particular disadvantaged and under-represented groups, including injured former service personnel, unemployed young construction workers and women. By the time the brokerage was wound up, a cumulative total of 4,544 jobs had been created on the project for local and/or previously unemployed people.