Train operator Southern has introduced automatic ticket gates at some of its London stations to combat fare evasion, but as Mike Blaquiere, Southern’s Project Manager explains, the company has also experienced wider benefits than merely an increase in revenue.

London Underground first introduced automatic ticket gates in the 1980s. At that time, British Rail’s southwest London network failed to attract sufficient government interest to install a similar gating scheme across the railway network. Instead, a penalty fare scheme was introduced by which random checking of passenger tickets resulted in fines being charged to fare evaders not in possession of valid tickets. British Rail also introduced ticket issuing machines at all stations within the penalty fares area that was regularly patrolled by ticket inspectors.

London Underground first introduced automatic ticket gates in the 1980s. At that time, British Rail’s southwest London network failed to attract sufficient government interest to install a similar gating scheme across the railway network. Instead, a penalty fare scheme was introduced by which random checking of passenger tickets resulted in fines being charged to fare evaders not in possession of valid tickets. British Rail also introduced ticket issuing machines at all stations within the penalty fares area that was regularly patrolled by ticket inspectors. While this system continues to work extremely well and ensures that genuine passengers aren’t penalised by those who travel without tickets, it is the automatic ticket gates at stations that are leading the line in the battle against fare evasion and trespassing on the railway.

The success of automatic ticket gates on London Underground prompted the then franchise incumbent, Connex South Central to install automatic ticket gates using the supplier Cubic, at Balham station in 1997. The trial was a resounding success and since then, more and more gates are appearing at stations within the London travel zone areas.

After the installation of gates at many London stations, benefits quickly became apparent. British Transport Police reported a 14% fall in crime on the railway in south London in 1998, and as the stations became cleaner and safer, it was possible to sell more retail space thereby improving both the facilities for passengers and increasing retail income for train companies. Almost 10 years later, in spring 2009, Southern, the DfT and TfL undertook an ambitious project to improve revenue, reduce crime, and generally improve key stations in South London. In just six months, the partnership succeeded in completing gating projects across no less than 12 stations in South London.

Not only was this project unprecedented in its scale and speed of completion, but it has delivered impressive results in terms of passenger security and generating revenue for further facilities improvements.

South London’s suburban stations are all too often associated with negative aspects of train travel. Currently, around 8% of passengers travel without tickets and the tens of thousands of pounds in lost revenue from fare evasion limits funding available for the regeneration of stations, and there is a negative perception of crime and anti-social behaviour and the fear of crime. However, Southern has taken measures to combat these feelings of insecurity by investing heavily in improvements to lighting, CCTV, safety fencing, mirrors and staffing. In addition, the vast majority of Southern’s stations are accredited by the DfT and British Transport Police under the Secure Stations accreditation scheme.

During discussions on the new South Central Franchise in late 2008, it became clear that significant synergies existed between DfT’s plans for the new franchise and TfL’s plans for expanding Oyster Pay as you go (PAYG) ticketing on London’s National Rail network. If these plans could be aligned, significant savings could be made and benefits to passengers delivered early. There was a unique opportunity to bring forward the gating of 12 London stations, so that they were in place for the start of the new franchise in September 2009 (rather than being delivered later during the new franchise). These changes would save the taxpayer money (by not introducing Oyster PAYG validators and by placing a bulk order for the gates), improve the value of the new South Central Franchise and facilitate the delivery of improvements earlier in the franchise than initially planned. As such the timescale was brought forward significantly, meaning the ticket gates needed to be installed in record time. 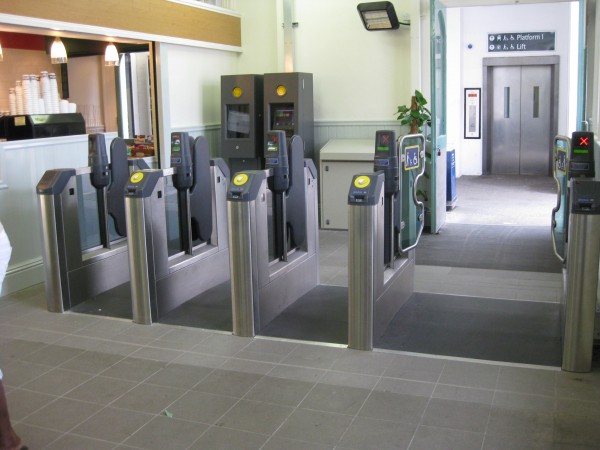 A unique partnership bringing together central government, local government and Southern was formed with the DfT agreeing to provide funds of up to £5 million to take forward the gating project (with TfL acting as DfT’s agent). TfL looked after the commercial aspects and project management, Southern dealt with station consents and enabling works and Network Rail gave advance consent for all the works. Southern’s Project Manager, Mike Blaquiere, was instrumental in ensuring the project came off without a hitch. He said: “I spent several weeks meeting and consulting with the DfT, TfL, local authorities and user groups. I also worked closely with Network Rail to secure their support for the project – in effect persuading them to give ‘carte blanche’ to the entire project, thereby cutting out a significant amount of red tape.”

He continued: “this was an extremely complex project covering many different agencies so it was crucial to bring them in at the earliest possible stage. Consultation was the name of the game with many organisations such as rail user groups and local authorities so face-to-face meetings with everyone were the key to the project’s success.”

Cubic was chosen as the preferred supplier, and to date Cubic has provided more than 3,400 automatic ticket gates at 379 stations in the London commuter area. A no-brainer as far as Southern was concerned.

For this project to be completed in such a short period, much of the usual bureaucracy and protocol had to be discarded so as a result of Mike’s efforts, good will and trust triumphed over the usual red tape and often convoluted planning processes. Though contracts were yet to be signed, the design team commenced the project ‘on risk’ but in the comfort that the relationship between TfL and Southern was such that the trust was established and the risk was minimal. Designs and proposals were put to each partner, each of whom gave a stamp of approval. Thanks to the DfT and TfL giving Southern autonomy over the project and the go-ahead to each design in advance, the project was able to advance quickly and without interruption.

The project was agreed in January 2009 with a target to complete and install gates at all 12 stations by 20 September 2009 (in time for the start of the new franchise). This tight turnaround time is unprecedented for UK rail and despite three major organisations being involved, this deadline was met. Another consideration was the cost of the project. Many of the 12 stations also need extensive refurbishment as a result of changes to the configuration of booking halls including new customer information screens, re-flooring and re-decoration, expanded entrance ways at Tulse Hill, Purley, West Norwood and Wallington, new CCTV and improved lighting. A tight budget of £5 million for the whole project had to be adhered to. Again, this target was met.

The new Cubic gates verify tickets with 100% accuracy. An added benefit of automatic ticket gates is their ability to record transaction details each time a passenger passes through. This capability provides the operator with realtime information on passenger patterns and use, allowing them to adjust staff schedules and resources to meet peak demand at their respective stations with the least amount of expenditure and increased efficiency. An unforeseen product of the installation of the gates and improvements in the station environment and customer security started to generate interest in the introduction of new retail facilities. To date, two stations have seen two new coffee shops opened and a further one is planned – a sure sign of confidence from retailers that railway stations which have automatic ticket gates are much safer locations to introduce new business.

Since the gates have been in place, a significant reduction in crime has been experienced at these stations. So far, overall reported crime has reduced by 16%. Most importantly to passengers, assaults are down by 33% and theft has been reduced by 25%.

The new gates are significantly reducing ticket avoidance and considerably improving income per month at each station – which has proved to be over and above our expectations. This additional revenue will provide an important financial contribution towards the package of enhancements that Southern will deliver across its stations in South London from spring 2010.

The value of gating has been proven to Southern, and as such the train operator has undertaken to gate a further 22 station across its network outside London as part of the new franchise.

Mike Blaquiere
Mr. Blaquiere’s career started in May 1983 as a carriage cleaner at Addiscombe station but quickly moved onto to becoming a shunter and ticket office clerk at the same station. Mr. Blaquiere then moved into a Central Station Accounts post where he stayed until the early 1990s when an opportunity presented itself to move into HQ customer service. This included answering customers’ letters and editing and producing time tables. It was whilst holding this position that Mr. Blaquiere offered to help out on the Facilities helpdesk when they were short staffed and he found out very quickly that he had a natural flare for this type of work and was appointed to a permanent position. Mr. Blaquiere then progressed up the ladder within the Facilities Dept and moved into the Project Managers role in 1997. He became part of the team that first installed ATG’s overground in the Southern and Southeast areas. He has since worked on numerous customer improvement technology based projects.