As the client behind the £55.7 billion line quickly approaches its 10th birthday, there are some major pressure points that they have had to face on the journey to construction. As Rail Industry Writer, Natalie Wilson explores, with public demonstrations, ballooning costs and procurement scandals, the High Speed Two (HS2) line has faced its fair share of challenges over the course of a decade, yet still, it soldiers on amongst the controversy. 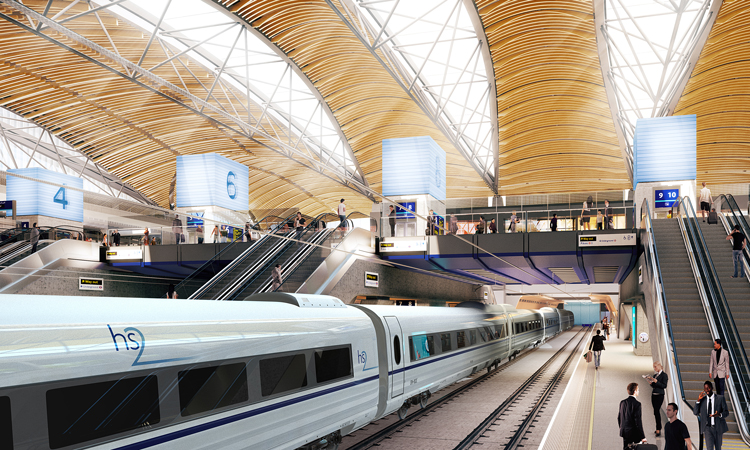 Since the establishment of HS2 Ltd back in January 2009, the case to have a high-speed railway running through the centre of Britain was officially made in a government white paper in 2010. At the time, the predicted cost was reported to be £30 billion. Whilst the final route was still undergoing negotiations and had not been settled on, the initial proposals looked to feature all of the main elements of the Y-shaped line which was finally confirmed in November 2016.

Although the route has remained mostly the same, the estimated cost of the project hasn’t followed the same path. The costs have gradually increased, reaching £55.7 billion in 2015 – almost double the original estimate.

The HS2 scheme has had its fair share of mismanagement, which did little to improve the public image. However, despite its various battles, the project strives on hitting milestone after milestone towards the full force of its construction work. So, with HS2 Ltd fast approaching its 10 years in operation, what has shaped the project’s progress and is it any more popular now than it was at its inception?

The question of rising HS2 costs

The cost that HS2 is continuing to acquire is one of its most contentious issues. During the 2010 election, the Conservative party had quoted an estimate of around £20 billion for the project, whereas Labour predicted around £30 billion. In January 2012, when the route was mostly in place, the estimate had crept up to £32.2 billion and in June 2013 it had reached £42.6 billion.

These figures were updated as recently as 2015, with the total costs (including all rolling stock) being estimated at around £55.7 billion. Infrastructure consultant Michael Byng, who created the system and method which Network Rail used to total up its project, published a report in April 2018 alongside Lord Berkeley where they set out the total cost that they believed HS2 would amount to.

The duo claimed that the first phase could well hit £48.7 billion rather than the £24 billion quoted by the government. By doing so, they accused those behind HS2 of underestimating the true cost of various elements, varying from railway control through to telecoms systems.

Michael Byng then went on to produce an updated report in July 2018, once again backed by Lord Berkeley, which ramped up the alleged cost for the first phase to £55 billion. They also claimed that the first phase was unlikely to be finished by 2026 and instead gave 2031 as a more realistic completion date. Both the government and HS2 Ltd have rejected these claims.

The project is still in the relatively early stages, so it is impossible to prove either side’s estimates. Currently, there has been £4.1 billion spent on legal and consultancy fees, from dealing with various residential conveyancing solicitors for disputes between land and property ownership to the early works which have so far been carried out.

With France, Spain and China all investing in high-speed railway systems over the last 30 years, no rail work has ever come close to HS2 in terms of cost and size. As a result of these examples, when it comes to justifying the cost of the budget, both the government and HS2 have repeatedly expressed their promise of the long-term benefits to the economy and increasing capacity. However, some experts argue that the long-term financial benefits that HS2 will bring to the economy through businesses and train fares will far outweigh the current predicted costs.

Another debate which has occurred frequently is how well HS2 can be integrated with other existing rail services. With the government expecting the first phase to cost £24 billion, the direct returns are enhanced capacity and reduction of the London to Birmingham journey time by approximately 32 minutes, which, by reducing the strain, will have positive effects on other rail lines and journeys.

Benefits are becoming harder to ignore

Opponents of the rail project argue that it is an unnecessary project which cannot be justified, however, the benefits that the high-speed railway will bring to the country are becoming harder to ignore.

With the current road system in the UK more stretched than ever, there is very limited availability when it comes to increasing road capacity. Many councils are spending money on road improvements, bypasses and building congestion relief roads, which will, naturally, require maintenance over the years. By offering high-speed rail travel, this may well encourage people to travel by train which will help to relieve traffic and congestion in city centres.

The investment will also provide jobs for those involved in the building and running of HS2. The government have predicted that by the time the programme moves into the construction of the line, the number of job roles that HS2 will have supported will reach 15,000. A whole generation consisting of engineers, architects and designers will benefit from the construction of the railway, as well as creating new and unique opportunities for British businesses who can upskill their workforce with employees from further afield.

Another huge debate that frequently takes places is the impact that HS2 may have on the environment. Some campaigners fear that the line runs through natural settings and will impact local animal populations and welfare. There are also concerns as to the number of trees that will need to be removed and how close the line will be to some protected sites.

However, the team behind HS2 have released their ambitions to make HS2 the most sustainable high-speed railway in the world. They hope to deliver a railway which respects the natural environment by adding in a new ‘green corridor’ to the proposed route.

They hope to plant seven million trees during the first stage of the project, thus creating new woodland in place of the ones that protesters are concerned about. They also suggest that carbon emissions will be reduced and pollution prevented.

Latest updates on the HS2 project

Despite the public concern, constant dressing down from the public accounts committee and ever-conflicting claims regarding the eventual costs, HS2 has continued to make progress. Two years ago, the enabling works started on the lines and early works have also taken place at Birmingham Curzon Street station and Euston Station.

The civil work on phase one of the project, which forms the bulk of the next phase of work, has been delayed, although HS2 CEO Mark Thurston has assured that this will not have any impact on the 2026 opening date. In October 2018, the National Audit Office published an investigation into the acquisition of land and property for the first phase and found that the “property acquisition is currently on track”.

With just over eight years until the planned opening date of the London-Birmingham phase, HS2 is still confident that they will hit their targets. Chris Rayner, HS2 Infrastructure Director said that “nothing that we see as far as we’ve got in developing designs and schedules suggests we are anything other than on schedule”.