The re-development of Moseley Station moves the project to reopen the Birmingham Camp Hill railway line a step closure to completion. 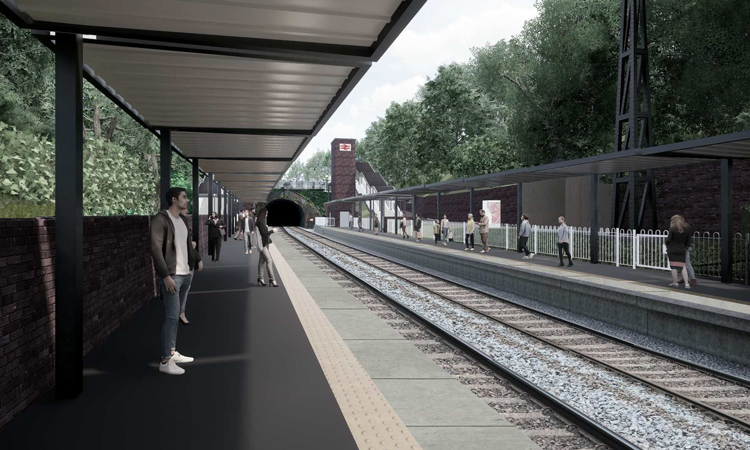 The project to reopen Birmingham’s Camp Hill railway line to passengers has taken a major step towards completion following plans being submitted for a new Moseley Railway Station.

Birmingham City Council’s planning committee has previously approved the construction of the Kings Heath and Hazelwell railway stations. Moseley is the third and final station planned to re-open as part of the re-introduction of passenger services to the south Birmingham line.

The Camp Hill line stations originally closed during 1941 and, since then, the line has been used only by freight and non-stop passenger services. The new stations will provide regular train services into Birmingham New Street, with quick journey times that offer commuters a genuine alternative to travelling by car.

Significant consultation has already taken place on the building of a new Moseley station, with TfWM, Birmingham City Council, and the Mayor’s office continuing to work closely with local community groups to address concerns from residents.

The Mayor of the West Midlands, Andy Street, said: “These planning milestones are superb news in marking another major step towards reopening the Camp Hill line to passengers, with services calling at Moseley, Kings Heath and Hazelwell for the first time since the Second World War. The new station at Moseley will provide residents with easier and faster connections to Birmingham City Centre and the wider West Midlands, and will offer people a real alternative to the car – something that is critical as we look to tackle our region’s climate emergency.”

Andy continued: “I am also pleased that, following some initial concerns expressed by residents, we are working together through the plans. We want local people to be proud of their new station, and it is good we are able to work together on this. Public transport is critical to our region’s future, and, despite the current coronavirus crisis, we must press on with our plans.”

The planning approval for Kings Heath and Hazelwell stations followed a very positive public consultation and design period, with long standing public support for their reopening. The Moseley station planning application has followed slightly later to allow significant consultation with residents and to resolve some engineering issues at the historic Moseley Tunnel.

Councillor Ian Ward, WMCA portfolio holder for transport and leader of Birmingham City Council said: “Rail travel has a major role to play in our efforts to reduce traffic congestion and improve our air quality in Birmingham, and this is an important step as we work to reopen the Camp Hill Line to passengers. Improved connectivity to the city centre will also draw investment to Moseley, Kings Heath and Stirchley, unlocking opportunities for local people and creating jobs.”