The demolition of London Euston station’s western ramp and canopy is a significant milestone in the preparation for the construction of the new HS2 station. 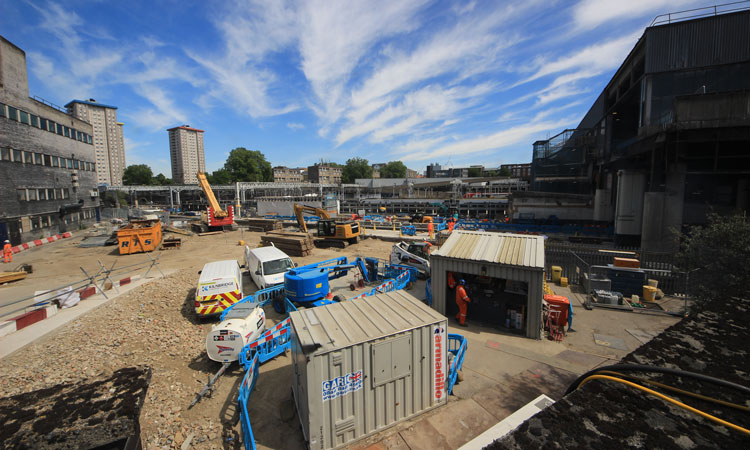 Work to prepare London Euston station for the construction of HS2 has reached an important milestone following the demolition of the station’s western ramp and canopy.

The structure has been in place since the modernisation of Euston in the 1960s as part of the electrification of the West Coast Mainline. Its removal, which took 13 weeks, paves the way for a new era of rail with the construction of the new HS2 Euston station, part of Britain’s new low-carbon high-speed railway.

Due to COVID-19 restrictions, work on the site was paused on 23 March 2020 but restarted on 16 April 2020 once UK government-approved safe working practices were in place. The work was carried out by Network Rail, HS2 and its contractor, Skanska.

The western ramp was used to access the parcel deck on the first floor of the station. The area was once used as a Royal Mail parcel sorting depot, taking parcels from the trains on three dedicated platforms for parcel freight. The ramp allowed vehicle access to the upper deck, but the parcel depot was taken out of use when post began being transported by road due to increased passenger demand. This growth has continued and is why HS2 is needed to meet capacity demands across the UK rail network.

Patrick Cawley, HS2 and Network Rail On Network Works (ONW) Director, said: “The completion of this work is of major significance to the HS2 project and marks the first piece of structural work to Euston station in order for the new high-speed station to be built. It has been an important and successful piece of collaborative work between the teams at HS2, Network Rail and Skanska. HS2 will transform the way we travel in the UK, helping to improve the current train network and providing new low carbon journeys and improving air quality for future generations.”

Patrick Vallely, Senior Programme Manager ONW at Euston Station, said: “I’m excited to be a part of the joint Network Rail, HS2 and Skanska team that, through great collaboration, effort and use of joint skills, successfully dismantled the west ramp and canopy to meet the original completion date – despite a necessary pause in works for three to four weeks to implement essential COVID-19 safety measures.”

HS2 is designed to provide much-needed extra capacity, as well as freeing up space for more freight and local services on the UK’s existing rail network and, as a major infrastructure project, will help towards the rebuilding of the country’s economy as it emerges from the coronavirus crisis.

In the long-term, the arrival of HS2 will also create the opportunity for up to 19,000 new jobs and 1,700 homes as part of a wider masterplan for Euston, as well as new public spaces and better access to the London Underground. Once complete, the station could, for the first time, include a new entrance facing north towards Camden Town and west towards Hampstead Road and the shops and restaurants of Drummond Street.