HS2 Ltd has released a new video to showcase how Britain’s new high-speed railway will provide a greener future by enabling new train paths on the existing network which can be used to move more goods by rail. 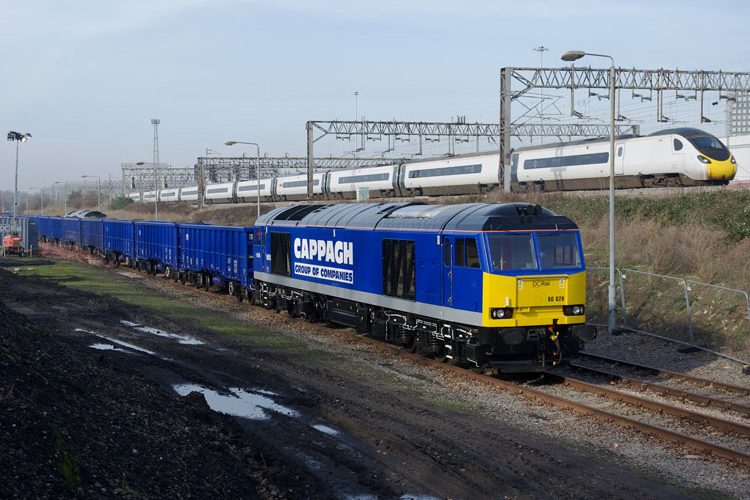 It is reported that building HS2 frees up a massive amount of space on Britain’s existing railway by placing high-speed services on their own pair of tracks. Once HS2 is operating, services will be able to run much closer together, meaning there can be more train paths to be used by freight services.

The video (below) features Derby-based rail freight company DC Rail, who specialise in moving construction materials by rail. They are part of Cappagh Group, a family-owned group of companies that provide construction services. In order to minimise the environmental impact of their operations, construction materials are moved by their own rail freight operating company, DC Rail. As part of a multi-million pound investment, they are currently constructing a new rail freight terminal in Wembley, on the West Coast Main Line, that will help them offer new rail services to customers in London.

The West Coast Main Line is the busiest mixed-use railway in Europe and is effectively full, meaning there is a lack of additional space to run more freight services on it. HS2 is set to change that, and once further phases of the railway are built, will provide additional capacity on the East Coast and Midland main lines.

Companies such as DC Rail are already using the limited slots on the rail network for freight to move construction materials. For example, materials delivered by rail are being used to construct new homes, schools and hospitals across the country. One freight train can carry enough material to build 30 houses, and in London, over 40 per cent of construction materials are delivered by rail.

Each freight train removes up to 76 lorries from Britain’s roads, which currently amounts to 1.5 billion fewer kilometres a year by heavy goods vehicles, or more than seven million lorry journeys. Freight trains also shorten many road journeys by delivering goods to a central logistics terminal, enhancing the efficiency and effectiveness of the delivery of goods to businesses and consumers.

Rail is also used to take things away from construction sites, such as soil. DCRail already takes soil away from the capital’s construction sites and this is then used to restore old quarries, making the management of those sites more sustainable too.

Ben Rule, Infrastructure Management Director, HS2 Ltd, said: “HS2 will unlock much-needed capacity on the West Coast Main Line, and eventually on the East Coast and Midland main lines as well. This additional space can be used by both passenger and freight services that will reduce car and lorry journeys, reducing the amount of carbon emitted by transport, and helping Britain reach its goal of net zero emissions by 2050.”

David Fletcher, Director of Rail, Cappagh Group of Companies, said: “Using the rail network to move goods is vital in order to take lorries off roads and reduce carbon emissions in Britain. We are committed to expanding our operations, demonstrated by our investment in a rail freight terminal in Wembley, but it is the arrival of HS2 that will be vital as it will provide more space on Britain’s railways for us to do more.”

Rail freight has a key role to play in the low carbon economy as rail produces 76 per cent less carbon dioxide emissions than the equivalent road journey. By enabling more freight to travel by rail, HS2 will help reduce carbon emissions, improve air quality and make our motorways safer.