Network Rail’s fleet of autumn RHTT and MPV treatment trains treated 895,217 miles of track in 2019 – the equivalent of travelling to the moon three and a half times. 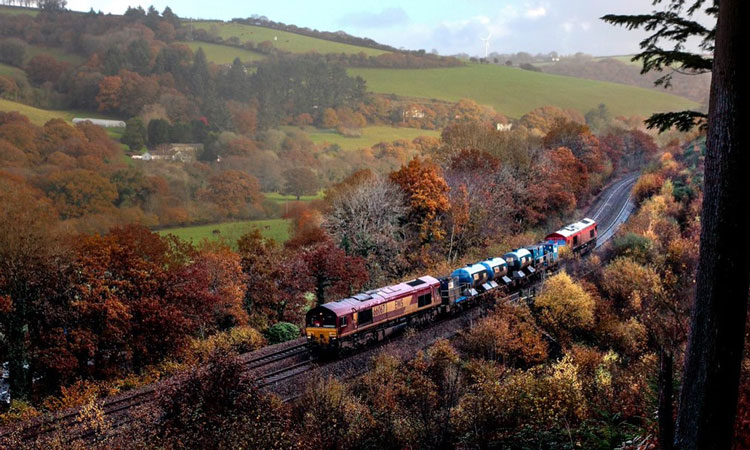 Network Rail’s fleet of 61 leaf-busting trains and 80 leaf-busting teams are being readied to help tackle the annual blight of leaves on the line.

Regarded as the railway’s equivalent of black ice on the roads, leaves on the line can create issues when they stick to damp rails and are compressed by moving trains into a thin, black layer which can affect train braking and acceleration. The build-up of leaf mulch can also make it harder for signallers to detect a train’s location, causing delays to services for passengers.

Measures include a total of 61 leaf-busting trains – 29 Railhead Treatment Trains (RHTT) and 32 Multi-Purpose Vehicles (MPV) – which move around the network, cleaning the top of the rail by spraying it with a water jet at very high pressure (1500 bar) to blast away leaf mulch. These trains also apply a gel, containing a mix of sand and steel grains, to help the train wheels run along the tracks as they ordinarily would.

In addition, 80 two-person leaf-busting teams will be available 24/7 at key locations to scrub the top of the rails by hand with a sand-based treatment.

Lineside vegetation is also managed and where necessary, replaced with species less likely to shed leaves on to the tracks.

Between 1 October and 13 December, Network Rail receives adhesion forecasts twice a day from a specialist weather forecaster, highlighting locations that require action and in turn allowing resources to be planned more effectively.

“Our preparation for this year’s autumnal weather has been as comprehensive as ever, and our highly skilled frontline teams and leaf-busting trains will be working non-stop to help keep the tracks clear and services running on time,” commented Network Rail’s network services director, Nick King.

“We have worked tirelessly to make sure passengers can travel by rail safely over recent months – for example through enhanced cleaning regimes at stations and introducing hand sanitiser points at our stations. Passengers should continue to follow Government guidance on the use of public transport by wearing a face covering, maintaining social distancing and travelling at quieter times where possible.”