Thales’ newly developed system removes the reliance on the train driver to watch track-side signals by providing the end user with continuous speed supervision and real-time information about the state of the railway ahead. 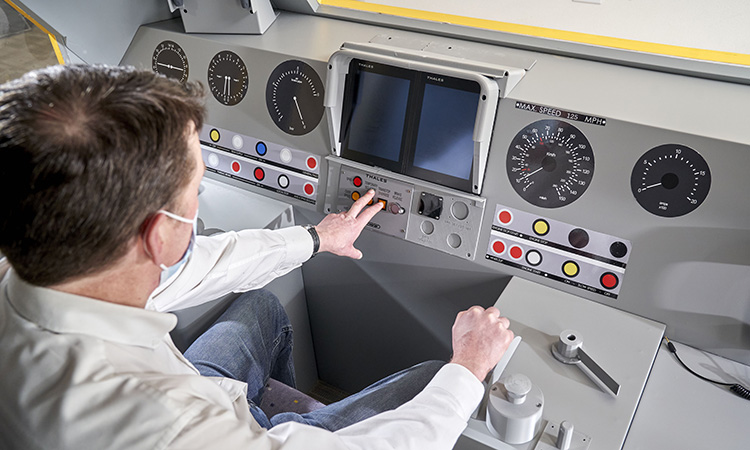 Thales has unveiled a new high-fidelity cab mock-up, marking a key milestone for the company in an ongoing project to retrofit three first-in-class (FiC) Class 43 power-cars.

The solution is set to modernise the on-board systems of the Class 43 power-cars, which are owned by Porterbrook, and is an important step in Network Rail’s plans to introduce European Train Control System (ETCS) technology across Britain’s rail network.

Train operators and owners had the chance to experience the latest on-board train control system by Thales for themselves. The mock-up cab, located at Thales’ Birmingham site, gives drivers from train operating companies (TOCs) hands-on experience of how the system will look and feel, providing the opportunity for valuable user feedback to be fed into the Thales project team.

“We’ve received extremely positive feedback from the customers so far,” said Thales‘ Senior Project Manager, Lokesh Anand. “Our stakeholders are able to experience the final solution and they are happy that we have taken on board their comments and feedback from the previous stage and that we are actively listening to them. We have a state-of-the-art product, with proven, user-friendly technology, and our solution provides the end user with continuous speed supervision and real-time information about the state of the railway ahead.”

The positive response from end-users enables Thales to take a big step forward towards closing out the final design phase and proceeding towards commencing the fitting of the system to Porterbrook’s Class 43 power-cars, which are operated by a number of Britain’s TOCs, as well as Network Rail. Installation of the systems is due to be completed and ready for integration testing during summer 2021.

ETCS is the signalling and train control component of the European Rail Traffic Management System (ERTMS), which is being adopted throughout Europe and beyond. Thales’ ETCS-compliant system makes use of standard trackside equipment and wireless controlling equipment in the train to receive line-side information, removing the reliance on the driver to watch track-side signals.

In Germany, Thales has developed the on-board systems combining established ETCS technology with additional technological features, including enhanced automation, cyber-security and engineering assurance. In the UK, Thales is responsible for integrating the equipment into the Class 43 rolling stock with project partners Ricardo Rail, with installation by Thales’ project partner, Yellow Rail.