In total, 10 touchscreens have been installed at London Euston station that offer the latest passenger information using British Sign Language.

A further 10 will be installed by the end of 2021 and an additional large screen will also soon be unveiled beside the arrival and departure boards on the main concourse. In total, £1.1 million has been invested by Network Rail to develop the software that is needed and to install the British Sign Language screens at Euston station.

The touchscreens have been developed in a pioneering partnership with Cambridgeshire-based British Sign Language company Clarion UK and Nottingham-based screen manufacturer LB Foster. 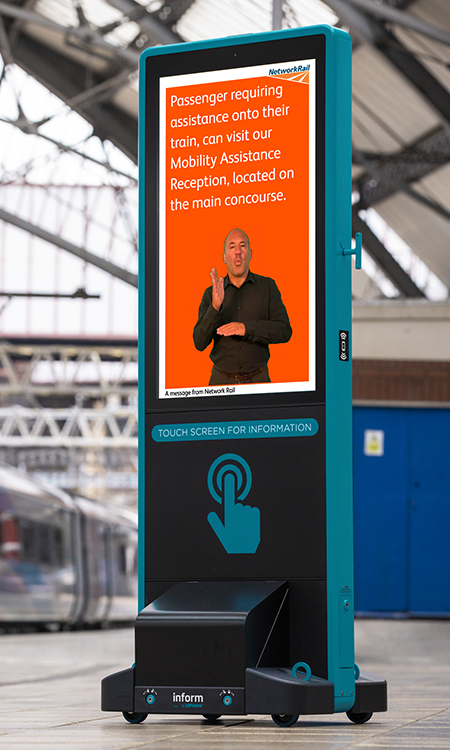 Clarion UK’s Sign Language interpreters have created a library of standard messaging as part of the screen software. But, in a railway first, its staff will provide passengers with signed information as situations evolve or during periods of unexpected disruption. Within an hour, messaging can be turned into British Sign Language and uploaded directly to the screens using 4G technology.

Loraine Martins, Network Rail’s Director of Diversity and Inclusion, said: “We understand that rail travel can be daunting for anyone with specific needs, and we’re always looking at ways that we can improve accessibility so that everyone can travel with confidence. We’re really excited to have these screens installed and in action, to see the real difference that they will make for passengers who use British Sign Language. Euston station is proud to be leading the way, and I look forward to a time in the not too distant future when screens like these will be the norm on the railway and not an exception.”

Sally Chalk, Chief Executive Officer of Clarion UK, said: “Delivering services for Sign Language users in ways that are innovative, clear and coherent is a really big deal for our team; we are incredibly proud to be bringing language to life at Euston.”

Graham Kett, Technical Operations Manager at LB Foster, said: “Adding British Sign Language interpretation into the system is a huge step forward in making operational information more accessible. This is a functionality that we want to roll out to more stations and in more use cases; simply put, all key messages being put out in written text or audio can fall into the scope of this system, which will make using the rail network more inclusive for more people.”

The hope is that the British Sign Language screens will be rolled out to other Network Rail managed stations across the country.