It is hoped that the development of using hydrogen fuel cells for Russia’s railways can help to reduce emissions, noise and vibration. 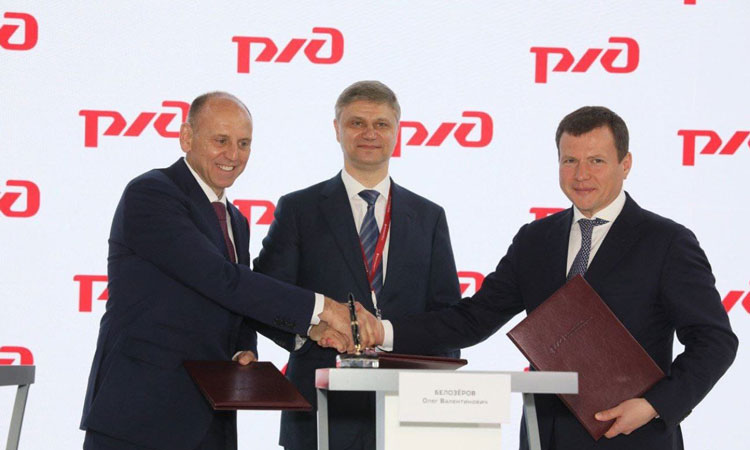 Russian Railways, RUSNANO and Sinara Group have signed a cooperation agreement for the development of trunk and shunting freight locomotives using power plants based on electrochemical hydrogen fuel cells in conjunction with lithium-ion batteries.

Russian Railways will act as a potential customer for locomotives, Sinara Group (represented by the machine building holding Sinara Transport Machines (STM)) will act as general contractor and RUSNANO (its subsidiary companies and partners) will act as a co-contractor in respect of creating the hydrogen fuel cells, the energy storage system based on lithium-ion batteries and other innovative technological solutions.

The agreement provides for a complex research, development and design works; a comprehensive analysis of the necessary infrastructure; and the development of technical requirements for the mainline freight locomotive, as well as a number of other activities. The parties are also interested in the development of a mutually beneficial cooperation on the development of shunting locomotives using hybrid power plants on the basis of hydrogen fuel cells and energy storage systems of domestic production.

Sergey Kulikov said: “The agreement is an example of creating alliances to separate costs and competencies for developing a promising technological project with the use of alternative energy resources. Today, the sector of hydrogen and electric transport is very promising, and RUSNANO intends to actively develop this focus area.”

“Russian Railways ranks first in the world in terms of energy efficiency of freight transportation, according to the International Energy Agency,” explains Oleg Belozerov. “The bulk of the work is done on environmentally friendly energy sources. The share of Russian Railways in the total volume of greenhouse emissions in Russia is less than one per cent. From 2025 onwards, we plan to purchase only electric locomotives, as well as locomotives powered by alternative energy sources, such as natural gas and hydrogen. This will help us to reduce the environmental burden even further.”

Dmitry Pumpyansky added: “We can see how the environment sets a new trend for further development of the entire railway engineering industry. Hydrogen transport on the railways can solve the task of reducing emissions and reducing noise and vibration. According to our estimations, the pilot samples of mainline and shunting locomotives can be created in 2023-2024.”