SJSC ‘Latvijas dzelzceļš’ (LDz) launches the start of the platform modernisation and construction project, which encompasses the design and build of 48 new modern railway stations and stops. 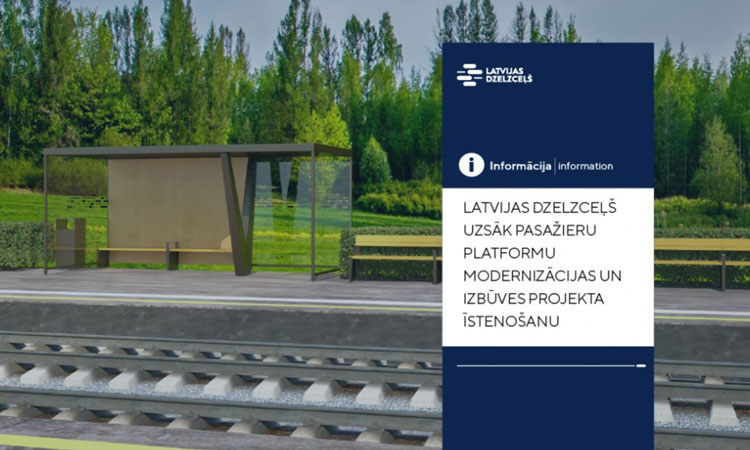 In partnership and under a design and construction agreement with two contractors, ‘BMGS – FIMA’, will design and build brand-new stations and stops along five railway lines including: Rīga to Jelgava, Rīga to Tukums II, Rīga to Krustpils, Zemitāni to Skulte and Kalngale to Skulte. The second contractor, LEONHARD WEISS OÜ, will perform the same works but only on one railway line (Zemitāni – Skulte (Zemitāni – Vecāķi)).

LDz is implementing the project as a part of the European Union’s (EU) Operational Programme for ‘Growth and Jobs’. Under measure 6.2.1.2, the “modernisation and construction of railway infrastructure” of the specific support measure 6.2.1. “to provide a competitive and environmentally-friendly TEN-T rail network, promoting its safety, quality and capacity.” The estimated total cost for the project is  €44.4 million, of which co-funding from the EU Cohesion Fund will make up 85 per cent. Furthermore,  the remaining 15 per cent will be paid by LDz own funds.

“In all of Europe and across the world, railway is one of the most important types of public passenger transport,” explained Māris Kleinbergs, Chairman of the Board of LDz.

“For railway to become a strong backbone of passenger transport also in Latvia, a number of aspects are essential – modern infrastructure at railway stations and stops, that would be friendly to all groups of passengers, safe and high-quality overall railway infrastructure, fast and sufficiently frequent rail traffic, as well as comfortable and modern rolling stock. I am therefore glad that Latvijas dzelzceļš is starting, and by 2023 will complete, work on such a major and socially significant project as the modernisation and construction of 48 railway stations and stops.”

The new railway stations and stops will include: elevated platforms, modern and functional canopies, adjusted to the capacity and requirements of passengers, benches and bicycle parking stands, as well as a client-friendly notification system that can be used by all passengers. The modern infrastructure will also be inclusive to passengers reduced mobility, providing them with tactile surfaces and guides. In addition, video surveillance will be installed to enhance passengers’ safety and security.

In 2020, LDz launched a uniform visual guideline for passenger infrastructure, which will be utilised at all new and renovated railway stations under the platform modernisation and construction project. Amongst the aforementioned railway stations, the project also aims to construct new stops at Silikātu Street and Slokas Street on the Torņakalns-Bolderāja line, at Dauderi on the Zemitāni-Skulte line, as well as near the Alfa shopping mall on the Rīga-Cēsis line.

Utilising digitalisation and innovation to monitor and maintain rolling stock