The High-Speed Rail Group (HSRG) has published a report with contributions from leaders across the Yorkshire and North East region, outlining the benefits of the government delivering the eastern route of HS2. 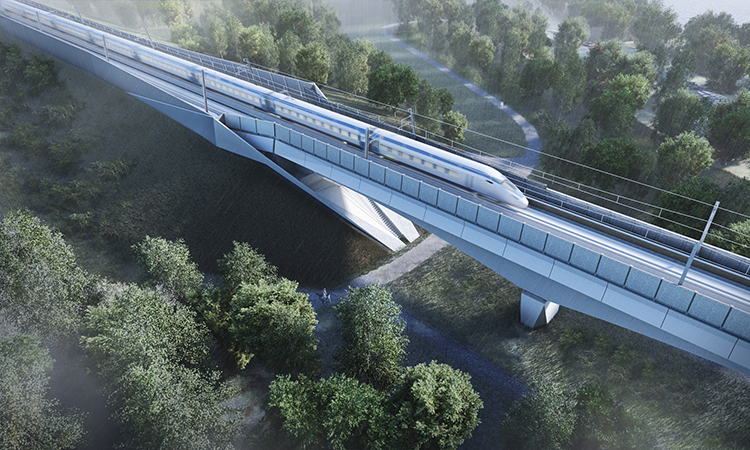 A new report from the High Speed Rail Group (HSRG) has made the case for the eastern leg of High Speed Rail 2 (HS2), which appears to be under threat. ‘High-Speed Rail Yorkshire and North East Voices’ brings together contributions from political and business leaders across the region who are in support of completing the route, which would see Birmingham connected with Leeds and York via Sheffield.

The report features Members of Parliament, local government leaders, LEPs and leading businesses, all of whom agree on several key themes:

HS2 will create a major new station in Leeds, and with new services due to come to Sheffield, York, Darlington, Durham, and Newcastle it stands to have an important impact in Yorkshire and the North East. The report claims services will integrate with NPR and local transport to relieve congestion, improve reliability, and speed up journey times. In Leeds alone, the HS2 Growth Strategy will bring over £500m in investment, around 40,000 job opportunities and will be a major vehicle for improving the country.

“As the government prepares to publish the Integrated Rail Plan and to make a decision on the Eastern Leg of HS2, it must listen carefully to the voices of Yorkshire and the North East that will be most impacted by the consequences of that decision,” a HSRG spokesperson said.

“‘High-Speed Rail Yorkshire and North East Voices’ shows that political and business leaders of the region are fully behind completing HS2 in full and integrating it with Northern Powerhouse Rail to ensure they get the investment, skills, and modal shift that these schemes can deliver. There must be no delay from the government in committing to the Eastern Leg.”

“The important word in the ‘levelling up’ agenda is the word ‘up’. We need everyone to be going ‘up’, but some might just need more help. We shouldn’t disadvantage growth in the South to help the North. We have regional strength, most notably manufacturing, which should be supported ahead and could play a key role in projects including HS2,” added Member of Parliament for Sedgefield, Paul Howell, who was interviewed for the report.