HS2 Ltd has confirmed that the landmark contracts to manufacture Britain’s next fleet generation of high-speed trains has been awarded to the Hitachi/Alstom joint venture. 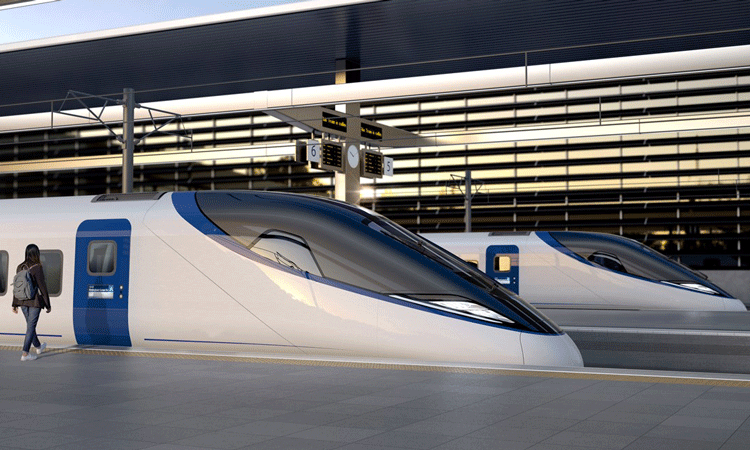 The landmark contracts (worth around £2 billion) will see the Hitachi/Alstom JV design, build and maintain a fleet of 54 state-of-the-art high-speed trains that will operate on HS2 – the new high-speed railway being built between London, the West Midlands, and Crewe.

The trains will be manufactured at factories in Derby and County Durham in a major deal set to support 2,500 jobs across the UK.

Capable of speeds of up to 360km/h, the fully electric trains will also run on the existing network to places such as Glasgow, Liverpool, Manchester, and the North West. Building on the latest technology from the Japanese Shinkansen ‘bullet train’ and European high-speed network, they will be some of the fastest, quietest, and most energy efficient high-speed trains operating anywhere in the world.

“Today’s announcement places Britain firmly at the forefront of the high-speed rail revolution with these state-of-the-art trains serving communities right across the country from London to Glasgow,” said Transport Secretary, Grant Shapps. This is another landmark step in the delivery of HS2 which will open up new employment and leisure opportunities for millions of people, levelling up opportunity for generations to come.”

The design, manufacture, assembly, and testing of the new trains will be shared between Hitachi Rail and Alstom:

In another major boost for train-building in the UK, all the bogies (which house the wheelsets) will both be assembled and maintained at Alstom’s Crewe facility, the first time since 2004 that both jobs have been done in the UK.

Hitachi Rail has recently completed a £8.5 million investment in new welding and painting facilities at Newton Aycliffe where the 432 HS2 bodyshells will be manufactured.

The first train is expected to roll off the production line around 2027. Following a rigorous process of testing and commissioning, the first passengers are expected to be carried between 2029 and 2033.

Welcoming the news, Mark Thurston, HS2 Ltd Chief Executive, commented: “Today is a massive day for HS2. The trains that will be built in Derby, Newton Aycliffe and Crewe will transform rail travel, offering passengers unparalleled levels of reliability, speed and comfort and help in the fight to remove carbon from our transport system. I’d like to congratulate Alstom and Hitachi and we look forward to working with them to bring these exciting new trains to passengers across the UK.”

“We are excited to be pioneering the next generation of high-speed rail in the UK as part of our joint venture with Alstom,” said Andrew Barr, Group CEO, Hitachi Rail. “This British-built bullet train will be the fastest in Europe, and I am proud of the role that Hitachi will play in helping to improve mobility in the UK through this project.”

Alstom’s Managing Director, UK & Ireland, Nick Crossfield, added: “HS2 is a once-in-a-generation opportunity to transform Britain by building a sustainable transport system fit for the 21st Century. I am delighted that Alstom’s joint venture with Hitachi Rail has been selected to develop, build and maintain in Britain the next generation of high-speed trains.”

A recent study commissioned by Hitachi/Alstom JV estimates that the award could generate benefits of £157 million per year across the UK and support 2,500 jobs including opportunities for apprenticeships and graduates.

Designed to be fully accessible, the interior layout will be decided following a two and a half year collaborative design process involving HS2 Ltd, the Department for Transport (DfT) and the West Coast Partnership, the operator of the trains when they first come into service.

Serving destinations such as Liverpool, Glasgow, Birmingham, and London, the HS2 trains will operate seamlessly between HS2 and the existing rail network halving many journey times across the UK. Each train will be around 200m-long, with the option to couple two units together to create a 400m-long train with up to 1,100 seats.

The train will also benefit from Hitachi Rail’s pioneering low noise pantograph, the arm which collects power from the overhead wires. Developed in Japan, this technology will make it quieter that comparable high-speed train and use regenerative braking to boost energy efficiency.

It will also be 15 per cent lighter and offer 30 per cent more seats than comparable high-speed trains in Europe – such as the Italian ETR1000 built by JV between Hitachi Rail and Alstom.

Alongside, design, manufacturing and testing, the contracts also included 12 years of maintenance which could be extended in the future to cover the estimated 35-year life of the rolling stock. The fleet will be maintained at a new maintenance depot being built by HS2 Ltd Ltd at Washwood Heath on the outskirts of Birmingham, creating jobs and additional apprenticeship opportunities.

A spokesperson for the High Speed Rail Group (HSRG), said: “This is a huge step forward for Britain’s most important infrastructure project. The HS2 trains will offer passengers a world class on-board experience and make a huge difference to how people think about rail travel in this country. Because to get to net zero, we need to get more people travelling by train, and outstanding rolling stock has a hugely important part to play in that. The construction of the first phase of HS2 is now 20 per cent complete and some 20,000 people are already working on the scheme. The industry and HS2 Ltd are making great progress in delivering this project, which will transform Britain.”