Wabtec are introducing the ES44ACi diesel-electric locomotive in Brazil, lowering operating costs and providing greater energy efficiency as the country continues to decarbonise. 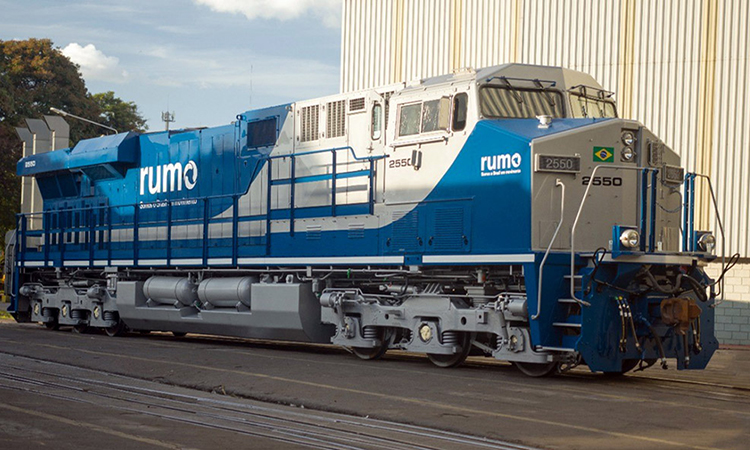 Wabtec Corporation is introducing a new locomotive model to Brazil’s rail freight market with deliveries to Suzano, MRS and Rumo in late March and early April. The introduction of the ES44ACi diesel-electric locomotive provides Brazil’s railroads improved performance on their decarbonisation journey.

“The ES44ACi locomotive features the Evolution Series diesel engine, producing the same 4,500 horsepower with just 12 cylinders compared to its predecessor the 16-cylinder FDL engine,” Daniela Ornelas, Vice President of Products at Wabtec, said. “This represents greater energy efficiency and lower emissions, thanks to a project aimed at the thermal efficiency of combustion combined with a dual-intake air cooling system adopted in these four-stroke turbocharged engines equipped with electronic fuel injection.”

This engine technology enables the locomotive to reduce fuel consumption and emissions by more than five per cent compared to its predecessor. The high-strength materials used in the ES44ACi also improve the reliability of the diesel engine and dramatically increase intervals for major maintenance by approximately 28 per cent, lowering operating costs over the locomotive’s life cycle.

The effort to bring the ES44ACi locomotive to Brazil’s rail market was an eight-year project with operators. The objective is to improve Brazil’s heavy-haul rail network and drive sustainability. To date, the company already secured orders for 25 locomotives from Suzano, Rumo and MRS.

“Our sustainability vision is grounded in operating in an ethical and socially responsible manner, maintaining a culture of safety, protecting the environment, and supporting our communities and developing our employees,” Juliano Andrade, Latam Commercial Director at Wabtec, said. “This was the main concept applied to the ES44ACi. We therefore want to build a better and more sustainable future.”

Rumo, the largest railway operator in Brazil, will receive the ES44ACi at the end of the month. The new acquisitions for the fleet reinforce the technological initiatives focused on operational efficiency and safety.

“Our priority is to promote an increasingly sustainable operation, not only in the economic aspect, but also in the social and environmental aspects,” Marcus Rogério Vianna Jorge, Director of Undercarriage at Rumo, said. “With the constant renewal of the fleet, we have gained in efficiency in the flow of agricultural and industrial loads, in addition to contributing significantly to the reduction of emissions.”

For MRS, a logistics operator that manages a 1,643-km rail network in the states of Minas Gerais, Rio de Janeiro and São Paulo, the ES44ACi will help optimise their system.  The new locomotive adds more technology and advances to the national railway sector, which the renewal of its concession is heading towards the final stretch at the Federal Audit Court.

“MRS has been investing heavily in expanding its fleet to contribute even more efficiency to the national logistics system, generating gains in energy efficiency,” Anelise Salzani, General Manager of Maintenance Engineering at MRS, said. “We are acquiring the ES44ACi because we expect it to be a locomotive with high power and lower diesel consumption. It incorporates two pillars of the company: the search for more productivity and the reduction in the volume of emissions, the consolidation of a more sustainable operation.”

Find out more about the Wabtec ES44ACi locomotive in the video below.