PKP Energetyka’s energy storage system will allow them to produce, store and use green hydrogen for railroad purposes. 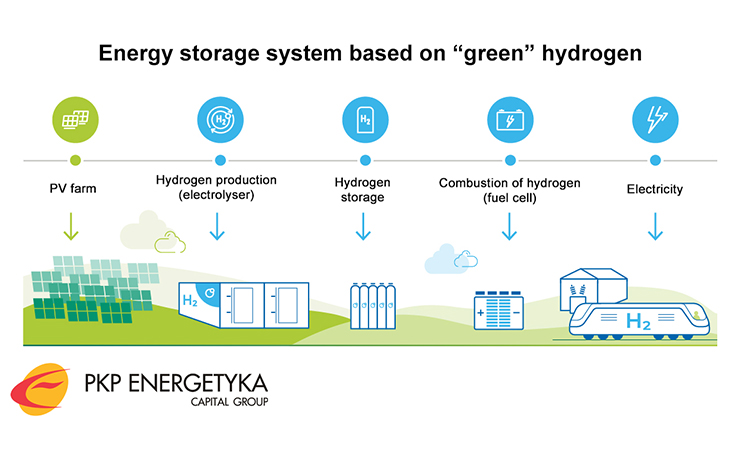 PKP Energetyka has announced that they are developing an innovative energy storage system based on hydrogen which is produced using energy from a solar farm. The commissioning of this facility is scheduled for 2023 and it will be built at the Garbce traction power substation.

The investment is worth over zł3 million and will allow for producing, storing, and using green hydrogen for railroad purposes. What is most significant is the fact that 100 per cent of the element produced will be obtained by electrolysis powered by solar energy. The facility, under construction as part of the R&D project, is designed to corroborate the feasibility of using hydrogen storage solutions for powering railroads in the future.

According to the schedule, PKP Energetyka will be the first company in Poland to actually use this pioneering system of supplying the railroad with energy based on hydrogen from RES. It will allow up to 23kg of hydrogen to be stored at one time with the power outputs of the individual components determined at 36kW for the electrolyser, 20kW for the fuel cell capacity, and about 150kWp for the solar farm.

The produced element will be used in the development and research phase for PKP Energetyka’s own purposes, i.e., to supply the traction substation, but the solution implemented in the future will also have the possibility of powering the traction system. The technical design of the system also allows for disconnecting the filled hydrogen cylinders, so it can be used, for example, to power railroad vehicles of PKP Energetyka.

“Our industry is currently undergoing an energy transition that we are pursuing primarily through the Green Rail programme,” Piotr Obrycki, Director of the Research and Development Office for PKP Energetyka, said. “Its goal is to switch 85 per cent of the railroad’s power supply to RES by 2030. Ultimately, we want the remaining 15 per cent to be green as well, which is why we are successively investing in modern research and development solutions that bring us closer to this goal.”

The implemented hydrogen system will be an important component of the traction power substation in Garbce. Together with the existing battery energy storage solution and the photovoltaic farm, it will create a unique ecosystem of interconnected and complementary facilities to generate and deliver dedicated energy for the railroad. As a result of this project, a modern and multifunctional traction power substation will be built, which will not only guarantee the safety and stability of the railroad power supply system but will also be environmentally friendly thanks to the production of green hydrogen.

Canadian Pacific recognised as a global leader in sustainability