CargoBeamer has successfully operated the first ever intermodal train for semi-trailers from the Port of Marseille Fos to the CargoBeamer-Terminal in Calais. 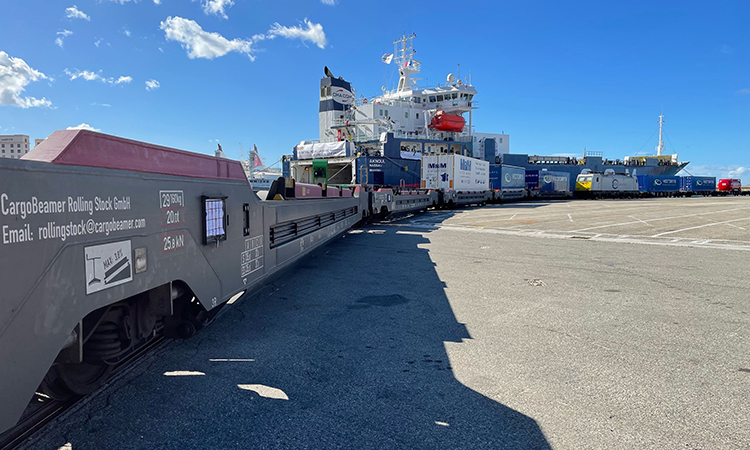 CargoBeamer has successfully operated the first ever train with trailers between Marseille and Calais. The train serves as the first successful railway line for unaccompanied transport of craneable and non-craneable semi-trailers on rail, a field CargoBeamer is specialised in. Travelling from the Port of Marseille Fos to the CargoBeamer-Terminal in Calais, the service enabled 28 units to be transported on sustainable rail instead of the road.

Like all CargoBeamer lanes, the train consisted of both CargoBeamer-railcars and twin pocket wagons. Traction was provided by DB Cargo France. In Marseille, the train was handled inside the Marseille Manutention Ro-Ro Terminal, owned by CMA Terminals, a 100 per cent branch of CMA-CGM Group. By transporting semi-trailers from Marseille to Calais on rail instead of the road, each loading unit reduced its CO2-footprint by around 90 per cent. For the whole train, this means reducing carbon emissions by around 30.8 tonnes of carbon emissions compared to road transport.

The Port of Marseille Fos serves as the leading port in France and one of the largest ports in Europe. In 2021, it recorded an annual volume of 1.5 M TEU. With 90 direct shipping lines, Marseille connects southern France to locations in Northern Africa and the Mediterranean, while also offering routes around the globe.

“I am pleased to see the successful completion of our first test train between Marseille and Calais,” Tim Krasowka, Managing Director of CargoBeamer intermodal operations, said. “In the Port of Marseille Fos, we have connected a highly interesting location in international supply chains to unaccompanied transport of semi-trailers on rail for the first time. Considering the fast growth of both the ports’ volumes and intermodal business in France, we are looking forward to exploring options of opening another CargoBeamer lane in this area.”

“The port of Marseille Fos has decided to fully support the destination growth in order to enhance its dynamism and development, as well as its attractivity by offering with its partners many economically interesting and environmentally friendly logistics solutions,” Hervé Martel, President of the Port of Marseille Fos, said. “This kind of new project initiated by CargoBeamer helps the port to position itself as one of the main RoRo hubs in the Mediterrean Sea area.  This road to rail solution is contributing to reduce efficiently the CO2 emissions, which is a strong axis of the port strategy.”