CargoBeamer have announced that the services it offers and the company itself are carbon neutral, with corresponding certificates issued by TÜV Nord Cert. 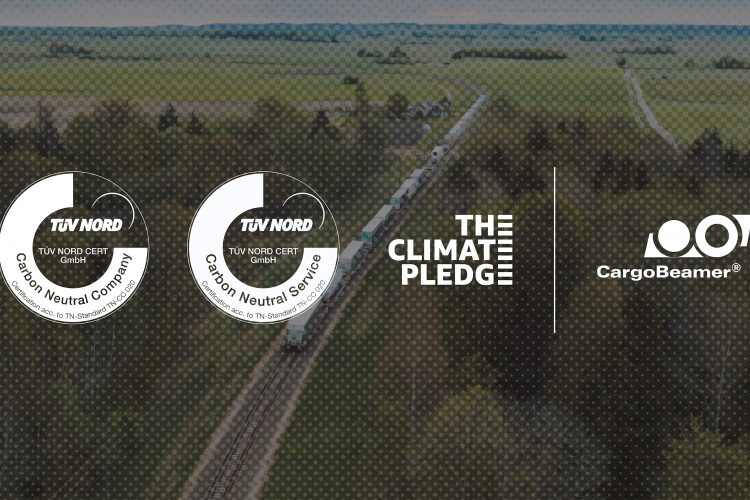 CargoBeamer is officially carbon neutral. The corresponding certificates were issued by the renowned service provider TÜV Nord Cert. All services offered by CargoBeamer and the company itself are carbon neutral retroactively since the beginning of 2022.

On average, rail transport with CargoBeamer saves about 85 per cent of CO2 emissions compared to road transport and is significantly more energy-efficient than all truck technologies (diesel, hydrogen, electric). The remaining 15 per cent generated during transport by rail and at CargoBeamer and third-party terminals are now fully offset by CargoBeamer with gold standard certificates, investing in initiatives that contribute to climate protection and other social development projects. In addition to CO2 emissions, other greenhouse gases such as methane (CH4) are also recorded as CO2 equivalents (CO2e) and offset.

As a carbon neutral company, CargoBeamer offsets both direct emissions (scope 1 and 2) and numerous service-related emissions from the scope 3 category, including business travel, commute, or the operation of office premises. While there are no additional costs for CargoBeamer’s customers regarding carbon neutrality, they receive annual certificates attesting to the CO2e emissions they have saved.

Related news you may enjoy:

To reaffirm its ambitious goals for sustainability, CargoBeamer has also signed The Climate Pledge. In this initiative launched by Amazon in 2019, more than 300 companies have since committed to net-zero emissions by 2040, ten years ahead of the Paris Climate Agreement. CargoBeamer will reduce this deadline for itself by another ten years to achieve carbon neutrality along the entire value chain by 2030. The difference to a certification as carbon neutral, which is already valid, is in the compensation of Scope 3 emissions in terminal construction and steel production upstream of wagon construction. CargoBeamer already offsets all other Scope 3 emissions generated by service providers.

“With carbon neutrality, we are responding to an increasingly loud call from our customers and sending a strong signal to the transport industry that environmentally friendly business practices are a top priority,” Nicolas Albrecht, CEO of CargoBeamer, said. “If the transport sector still accounts for a large share of Europe’s total emissions, there is a need for innovative and sustainable technologies for logistics, which at the same time can meet the rapidly growing demand for reliable and high-frequency transport chains. A dense network of CargoBeamer routes and terminals will be an important part of the solution. Thus, we will massively expand both in the coming years. In 2030, we aim to save more than 2.5 million tons of CO2 per year, which is equivalent to the annual emissions of around 350,000 EU citizens.”

“Signing the Climate Pledge was an easy decision for us as it makes us part of a group of more than 300 companies, including companies such as Maersk, SAP, and ASOS, which see themselves as pioneers on the road to a climate-friendly economy and society,” Boris Timm, COO of CargoBeamer, said. “The fact that CargoBeamer has also committed to being carbon neutral along the entire value chain by 2030 instead of 2040 shows the enormous importance of an environmentally friendly business model for CargoBeamer.”