The newly acquired fleet of Class 360/2 EMUs will be used by the Global Centre of Rail Excellence as part of their testing and research. 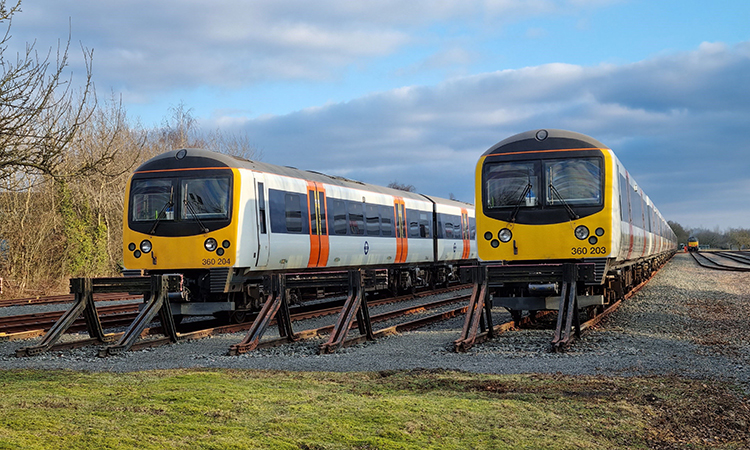 The Global Centre of Rail Excellence (GCRE) have announced the acquisition of a fleet of three Class 360/2 EMUs from Rail Operations Group. The Class 360/2s were previously used to operate the Heathrow Connect stopping services on the route between Heathrow Airport and London Paddington.

Currently stored at MoD Bicester, the Class 360/2s had been facing the end of the line and were destined for scrap but will now be moved to GCRE during 2023 when GCRE’s own commercial rolling stock storage facility becomes available to the wider market. The fleet will then be used as part of the GCRE research and innovation offer. The trains will be available to the industry as test train ‘mules’ available to test ETCS, novel train control, traction and suspension and many other railway innovations for the industry.

GCRE will feature two test loops, both electrified at 25kV AC. One will be a 6.9km high-speed rolling stock test track with a design speed of 110mph. The inner loop will be 4km long and designed for 40mph running and will be dedicated primarily to infrastructure testing, where heavy passenger and/or freight trains, including the Class 360 fleet, will run 16 hours a day, five days a week to provide the 20 MGT/60,000 axle passes ‘load’ on the infrastructure loop. This will create a realistic replica of a UK mainline and enable rapid life and degradation testing of infrastructure components, unique to Europe.

“The acquisition of a fleet of electric trains is a significant milestone in establishing the Global Centre for Rail Excellence in the Dulais and Upper Swansea Valleys,” Vaughan Gething, Economy Minister for the Welsh Government, said. “Once established, this facility will provide a raft of vital services, research, development and innovation to us in Wales and partners across these islands and the world.”

“Our investment in this fleet of Class 360/2 EMUs is an important step towards achieving our vision of putting the UK at the very heart of 21st century sustainable transport innovation,” Andy Doherty, Chief Technical Officer for GCRE, said. “GCRE is strategically important for the whole UK rail industry.  Our target is to enable high Technology Readiness Leve testing within an extreme environment, becoming the ‘one stop shop’ for railway innovation with state-of-the-art rolling stock testing, infrastructure testing and storage and maintenance. Importantly, we will also enable the rail industry to lower carbon emissions, improve reliability and enhance the customer experience for all of the UK.”

“The Class 360 units have been in store at MoD Bicester since we acquired them from Heathrow Airport in February 2021,” David Burley, Chief Operating Officer at Rail Operations Group, said. “They are an excellent fleet for rail testing purposes and will certainly help GCRE to deliver the robust testing facilities that the UK and European rail industry desperately needs. What’s more, repurposing them for testing means that they are now saved from the scrapyard.”