Over the past six months, Network Rail have been working on waterproofing and strengthening the ceiling of the High Neck Tunnel between Liverpool Central and Brunswick station. 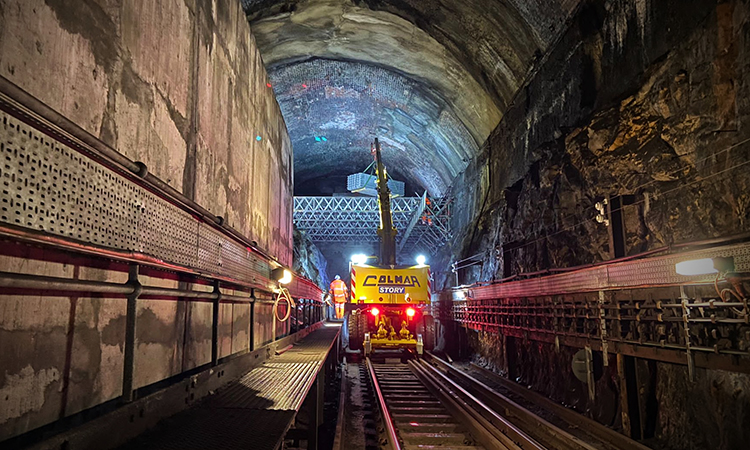 Railway engineers are using 21st century technology to fix an underground tunnel in Liverpool city centre while causing zero disruption to passengers. Unbeknown to city dwellers above or rail passengers below, for the last six months Network Rail has worked unnoticed on a key section of the Merseyrail network. 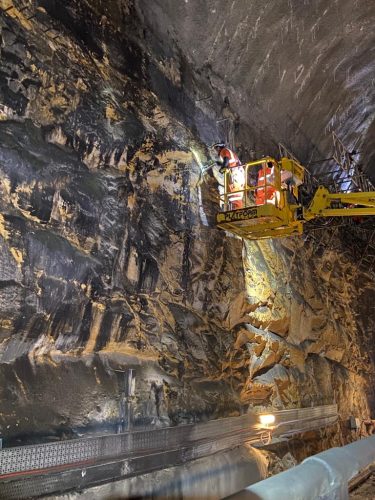 The £3.5 million investment involves waterproofing and strengthening the ceiling of High Neck Tunnel between Liverpool Central and Brunswick station. The upgrades will fix leaks and loose Victorian brickwork in the 130-year-old tunnel so future journeys are more reliable for passengers between Southport and Hunts Cross. A steel ‘ram-arch’ tension system is being installed to the tunnel roof before being sprayed with concrete to strengthen it for the next 100 years.

With the help of computer-aided design (CAD), Network Rail came up with a smart solution to keep passengers moving during the complex project. To start with, specialist LiDAR laser surveys mapped every inch of the tunnel interior to create a 3D computer model. Capturing every uneven brick and lump of loose stonework meant scaffolding teams could build a massive temporary platform – affectionately dubbed ‘the dance floor’ – so workers could be safe high above the tracks while allowing trains to pass underneath as normal.

In numbers the work will involve:

The Network Rail Civils Internal Delivery team were also specially trained and accredited to use the ‘ram-arch’ system to provide structural support to the tunnel ceiling. Sections of bespoke-designed curved trusses are bolted into place using a mechanical guide and tightened like a giant cobweb. Training in this specialism saved Network Rail the need to employ external contractors like during previous major tunnel repairs. The team’s new expertise will also be used on future projects saving further money for the taxpayer.

“In the past some previous repairs to High Neck Tunnel caused major disruption because accessing the tunnel ceiling is so difficult and the railway needed to be closed entirely,” Helen Little, Works Delivery Supervisor for Network Rail, said. “Building on similar repairs in 2017, it was our priority this time to make sure we didn’t disrupt present day journeys while we fixed the structure for the future. It’s been great to train up to install the ‘ram-arch’ system ourselves and the team now has the skills to take this on to further work within Network Rail and save taxpayers’ money. The CAD also improved efficiency because it’s enabled us to plan the project right down to the last bolt – minimising materials being wasted.” 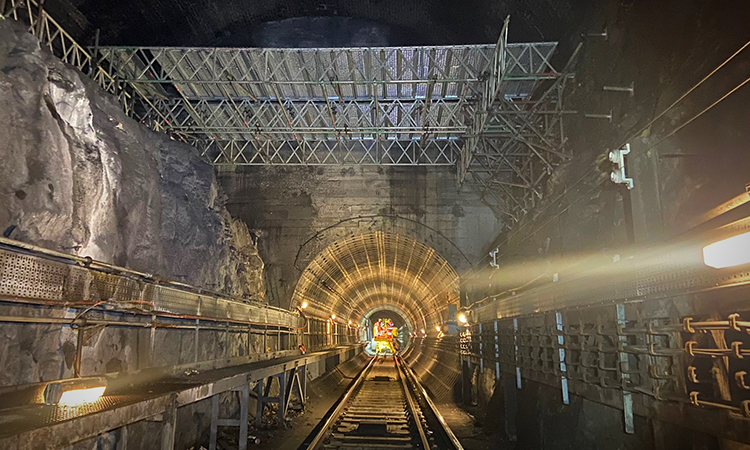 View down the tunnel towards Brunswick station with scaffold deck under construction above
Credit: Network Rail

“We are pleased to work with our partners at Network Rail as they utilise cutting edge technology to ensure vital work on our network can be undertaken without impacting on the service we offer to our passengers,” Zoe Hands, Chief Operating Officer for Merseyrail, said. “We hope to see more works of this nature undertaken in this way going forward, so that we can continue to offer the best possible train service to the people of the Liverpool City Region.”

The final phase of the project, when concrete is sprayed into the reinforced metalwork, starts this month with the underground upgrades expected to finish by the end of 2022. It will complete work started in 2017 and will mean the entire length of the 125 metre long tunnel has a reinforced concrete roof needing minimal to no maintenance for decades to come.