Representatives of Škoda Transportation and DB signed a contract… 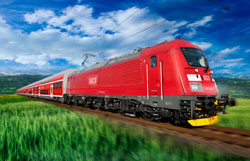 Representatives of the Škoda Transportation company and the German operator Deutsche Bahn (DB) signed a contract for the delivery of six modern train sets, amounting to 110 million euro. The vehicles will be operating in Bavaria on the railway track Nurnberg – Ingolstadt – Munich from December 2016.

„This day confirms that our company Škoda Transportation can be ranked among the biggest world producers of rolling stock. The conclusion of this contract is a proof of the high quality and competitive ability of our rolling stock. To Germany, we will supply a modern train with technical top equipment. The reference by the giant Deutsche Bahn opens us the door to the entire world,“ Tomáš Krsek, the Chairman of the Škoda Transportation Board of Directors, says. Škoda Transportation will supply DB Regio with six six-vehicle two-floor sets of Push-Pull type. Each of the sets is operated as a returning one, i.e. the vehicles are either pushed or pulled by the locomotive – the engine driver is either in the cab of the driving car or in that of the locomotive. The sets consist of one driving car, five intermediate cars and the locomotive Emil Zátopek in the new design intended particularly for DB.

The maximum speed of the trains will reach 189 km/h. The sets are equipped with pressure-tight bodies which stabilize the pressure inside the cars when passing the high-speed vehicles (speed up to 300 km). Altogether, the sets will include 705 seats. All the seats in the trains will be comfortable, equipped with a power point.

The Wi-Fi connection, both in the first and the second class, is a matter of course. The equipment includes also air-condition, which takes care of convenient temperature on hot summer days. For the safety, each of the trains will be equipped with an external and internal CCTV system.