Network Rail is preparing to open the first two-thirds of the new station concourse at London Bridge station from the end of August 2016. 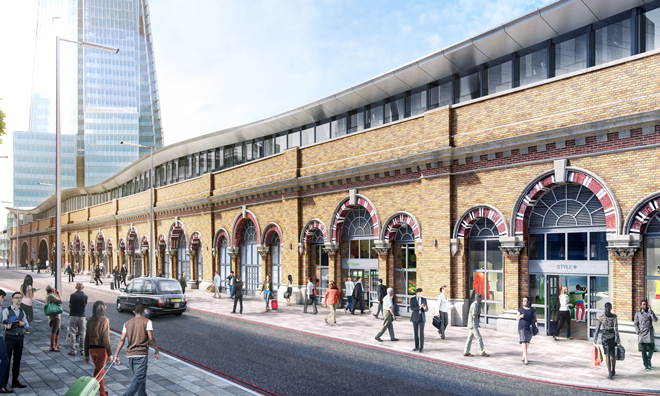 Network Rail is preparing to open the first two-thirds of the new concourse at London Bridge station from the end of August 2016. A major milestone in the redevelopment of London Bridge station will soon be achieved as Network Rail prepares to open the first two-thirds of the new station concourse at the end of August.

Bank Holiday Monday (August 29) will be the first time passengers travelling into London from Kent and south east London will be able to use the massive concourse, which is being created underneath the existing railway as part of Network Rail’s Railway Upgrade Plan. Once complete, the concourse will be larger than the football pitch at Wembley and provide more space, easier connections to other rail services and the Underground, and better shops and facilities. In addition, passengers on Southern and Thameslink trains will see the hoardings on their platforms come down over the August Bank Holiday.

As construction moves from the completed section of the station and begins on the remaining platforms – currently used by services to and from London Cannon Street – there will be major changes to train services.

Richard Dean, Train Services Director at Southeastern, said: “We’re really pleased that our passengers will be able to start using the new station. There’s still a lot of work to do and we need to make major changes to our services to allow the next phrase to happen. We ask that passengers check southeasternrailway.co.uk/august for full details of how their services will be affected, especially on the working days, Tuesday 30 August – Thursday 1 September when we’ll be running fewer trains than normal.”

Commenting on the future opening, Thameslink Programme director Simon Blanchflower said: “It’s a major milestone for the programme when we open the concourse this August bank holiday, as it also means that passengers will finally get to see the outcome of all the work we have been doing for the past few years. There will be wider platforms, new shops and cafes and of course the huge new concourse we have built under the tracks.”

“There will also be changes to some train services from that week as we start the massive logistical task of moving construction work from the south to the north side of the station, so I would also encourage passengers to check before they travel.

“This is the first time we have been able to build what is effectively a brand-new station in London while keeping the station open for the 56 million passengers that travel through it each year. We have designed it entirely around the needs of the passengers and taken inspiration from modern transport hubs such as airports as much as from the railway stations of the past. The station will be complete in January 2018.”

Once complete,, London Bridge station will provide passengers with longer, more spacious trains through central London every two to three minutes at peak times, as well as improved connections and better options to more destinations on an expanded Thameslink network including Cambridge and Peterborough.