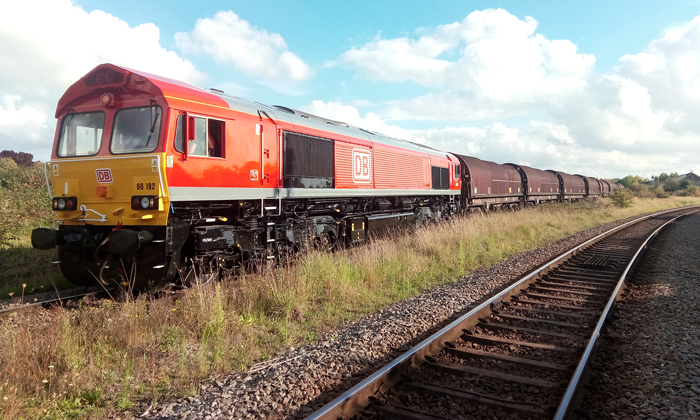 The aim is for the service to operate weekly once the trial is complete and it underpins the investment that DB Cargo UK has made into its facilities at the site, which includes the development of the new Wolverhampton Logistics Centre, which is set to open in July 2018.

The trial train transported 20 loaded BYA type wagons of steel coil from the Port of Boston on the East Coast of England, with DB Cargo UK providing a full port-to-end-user service for ArcelorMittal, with the final miles of the delivery done by road to a number of manufacturers in the West Midlands.

“We are thrilled to have launched the first trial train with ArcelorMittal, which is all part of our exciting plans for future development at Wolverhampton,” said Roger Neary, Head of Logistics Sales at DB Cargo UK. “When we open the Wolverhampton Logistics Centre in 2018 we plan to increase this service from one train to three or four trains per week.

Using rail… significantly reduces congestion on the roads, as each train can carry as much material as around 76 HGVs”

“Such services support the British manufacturing industry by delivering steel to companies across the West Midlands that produce products such as white goods, heaters and cars. Using rail also significantly reduces congestion on the roads, as each train can carry as much material as around 76 HGVs. We are really proud of the trial and look forward to working with ArcelorMittal to progress the service further.”

The current facility at Wolverhampton has the capability of storing and handling 1,380 steel coils. The new centre will increase this by 1,944 coils, giving a total capacity of 3,325 coils, which is 40,000 tonnes of steel.