Twenty-five Coradia Lint regional trains have been ordered for Germany 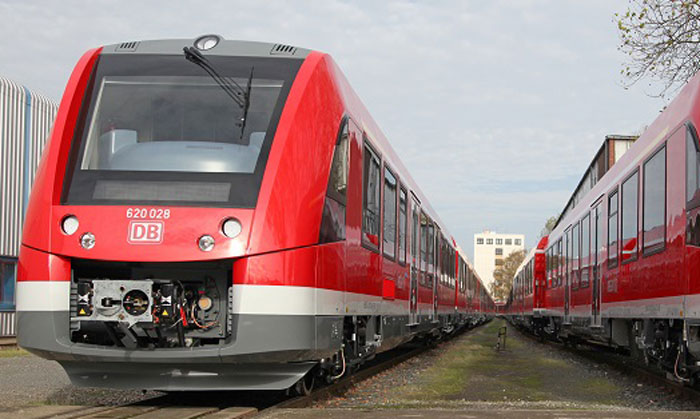 “Starting in 2019, the trains will be operating in Baden-Württemberg and from 2020 in Bavaria, improving railway transport and bringing passenger comfort to a new level,” said Joerg Nikutta, Managing Director of Alstom in Germany and Austria.

The vehicles ordered by DB Regio will operate on the ‘Dieselnetz Ulm’ network along routes travelling to Memmingen, Weissenhorn and Günzburg-Mindelheim. The autumn of 2020 will see the delivery of 15 trains, while the remaining five will follow in autumn 2022.

The five Coradia Lint 54 ordered by HzL for the Bodenseegürtelbahn network in Baden-Württemberg are identical to the fleet ordered by HzL in 2016 for the ‘Ulmer Stern’ network and will be delivered with the main fleet in June 2019.

The low-consumption vehicles have a maximum operating speed of 140km/h with high acceleration. The two-part trains feature an entry height of around 620mm, a seating capacity of 150 passengers and 18 bicycle parking spaces. Almost every fixed seat is equipped with a table for laptops and the trains with WLAN, an entertainment and passenger information system with static and dynamic information monitors and video surveillance to ensure high passenger safety.

Alstom’s Coradia Lint trains, thanks to continuous improvements, offer high standards in terms of safety, noise and CO2 emissions and are characterised by high availability.