Due to begin operation across the East Midlands network by 2022, the 33 new Hitachi trains will improve the passenger experience with more seats, more services, faster trains and better stations for passengers. 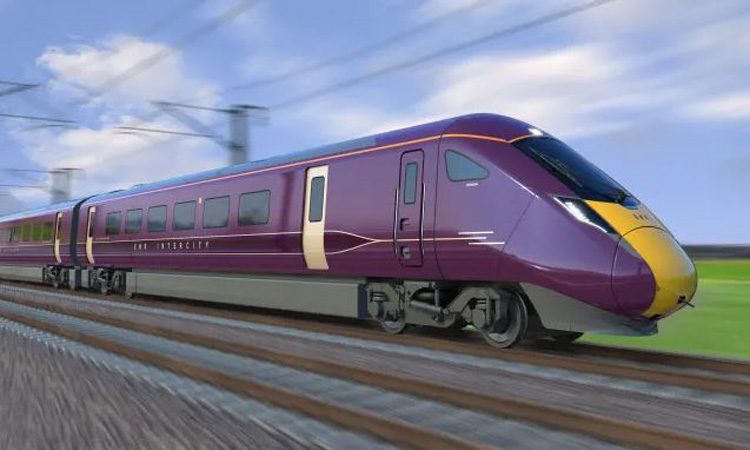 Abellio UK, recently awarded the new eight-year East Midlands Railway (EMR) franchise by the Department for Transport, has confirmed that it has now awarded a £400 million contract to Hitachi Rail to build a pioneering new fleet of intercity trains.

The new state-of-the-art intercity trains will start operating in 2022 and will serve the main cities and towns on the Midland Main Line including Sheffield, Chesterfield, Nottingham, Derby, Leicester and Lincoln as well as Kettering and London St Pancras.

The new trains will offer significant advances on the existing fleet, with passengers benefiting from more seats and modern interiors. Abellio has ordered 33 five-carriage trains, which will regularly be operated in 10-carriage formations. The trains will include features that passengers and local stakeholders have said they want to see, including air conditioning, free Wi-Fi throughout, plug sockets and better passenger information screens. There will be an improved and more consistent ‘seven day’ catering service in both first and standard class.

The new Hitachi trains are quieter and greener, meaning lower carbon emissions and a better environment for passengers, stations and communities along the route. They have the ability to run using electric overhead lines wherever possible, taking advantage of the £1.5 billion Midland Main Line upgrade and, when running in diesel mode, will cut harmful emissions (particulate matter) by up to 90 per cent compared to the legacy High Speed Trains.

The new order for Hitachi will benefit suppliers across the country and, in particular, the East Midlands. Hitachi’s UK train factory at Newton Aycliffe, Co. Durham has worked with 65 different suppliers from the East Midlands, awarding various multi-million-pound contracts to support skills and high-quality jobs in the region.

Since opening in 2015, Hitachi’s state-of-the-art manufacturing facility has already delivered over 450 intercity train carriages into passenger service in the UK and, where services are in operation, passenger satisfaction rates have seen a significant increase. Based on Japanese bullet train technology, the new fleet for EMR is the sixth intercity fleet that Hitachi will deliver to UK train operators.

The funding package for these new Hitachi trains is led by Rock Rail and the fleet will be financed through Rock Rail East Midlands Plc. and leased to Abellio for the life of the franchise. As with Rock Rail’s previous new rolling stock deals, debt will be provided by institutional investor organisations (pension funds and insurance companies).

Commenting on the order, Dominic Booth, Abellio (UK) Managing Director, said: “These new trains form the centrepiece of our ambitious plans for a complete replacement of all the trains on the East Midlands Railway and are a more than £600 million investment to really improve the region’s railway. They will respond to what our passengers have told us they want with more frequent services, faster journeys between the East Midlands and London, and provide more capacity with 80 per cent more seats into London in the morning peak”.

Karen Boswell, Managing Director for Hitachi Rail UK, welcomed the positive news for British railway workers. She said: “The announcement will be welcomed in workshops and engineering centres across the country, thanks to our large network of UK suppliers. Our train factory in County Durham sources train parts from across the country, including a significant amount from the region where the new trains will run. Hitachi is delighted that EMR passengers will soon be receiving the very latest model of our new intercity trains, which are already proving popular and increasing satisfaction among passengers in other parts of the country.”

Mark Swindell, Chief Executive Officer, Rock Rail, which is financing the trains, said: “Rock Rail is delighted to be working with Abellio and Hitachi and our institutional investor partners to bring these trains to the region and deliver step changes in the travelling experience for the people of the East Midlands.

“This new state-of-the-art Hitachi fleet represents Rock Rail’s fourth new rolling stock deal in the UK, and across all deals combined sees investment by the institutional investor sector of around £2.5 billion in the UK railway. This long term, highly competitive funding enables significantly enhanced value for money to rail passengers and tax payers over the life of the trains, along with significant improvements in passenger, environmental and operational features.”