Network Rail are set to carry out experiments this autumn to trial new ways of braking designed to reduce delays for passengers caused by ‘leaves on the line’. 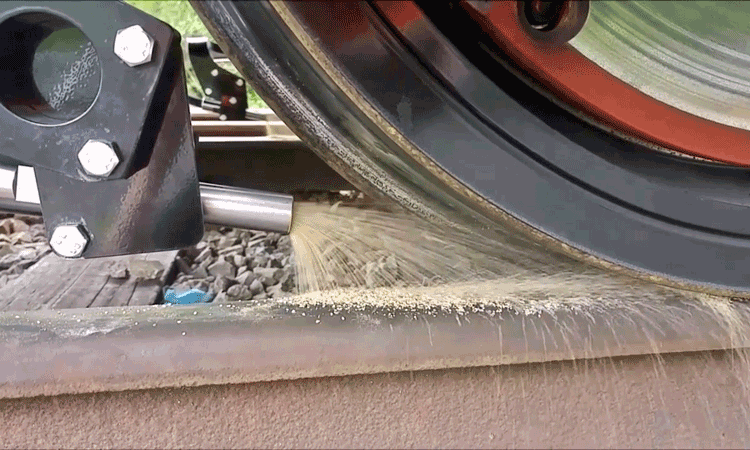 Close up of rail sanding process

The pioneering testing will take place during October 2019, causing part-closure of the Cross City line.

Train performance can be affected during autumn as compressed leaves on the tracks cause a ‘Teflon-like’ substance which causes train wheels to slip and skid. This means trains often travel more slowly in certain areas to stop this happening, causing disruption to the timetable.

To balance this, a temporary timetable can be introduced which re-times trains to account for the extra minutes needed to run safely – as seen on the Cross City line through Birmingham.

Martin Colmey, Head of Operations Delivery for Network Rail’s Central Route, said: “Leaves on the line is a big problem for the railway. It disrupts services and inconveniences passengers and every year, Network Rail and train operators work together to battle against the elements to keep people moving safely and on time.

“We are always looking at innovative ways to improve the railway for our passengers, so we’re excited to be working with West Midlands Trains and the Rail Safety and Standards Board (RSSB) on a project which could see delays by dreaded ‘leaves on the line’ become a thing of the past.”

The braking experiments will see targeted jets of sand sprayed directly in front of individual train wheels before they pass over rails which have been made artificially slippery, as if leaves had fallen on them. This a development of a similar method which already exists but these trials aim to target specific wheels when they start to slip, applying sand as and when it’s needed, to see if it reduces the need to brake or decrease a train’s speed.

Network Rail’s partnership with the RSSB and West Midlands Trains will test this method on the main line rail network for the first time. If successful, it could eventually benefit millions of passengers nationwide.

“RSSB is very grateful to West Midlands Trains and Network Rail for their leading role in this testing which will unlock the ability to use it widely across the network, improving performance and reliability, particularly during autumn time.”

Neil Bamford, Engineering Director at West Midlands Railway, said: “It might seem like an old problem but with millions of trees in Birmingham alone, leaves falling on the line cause very real issues on our network. We are fully committed to improving the experience for our passengers and once perfected this innovative system could boost reliability in the autumn months.”

If the new braking method is successful, the hope is trains could drive at normal speeds regardless of whether there are leaves on the line.