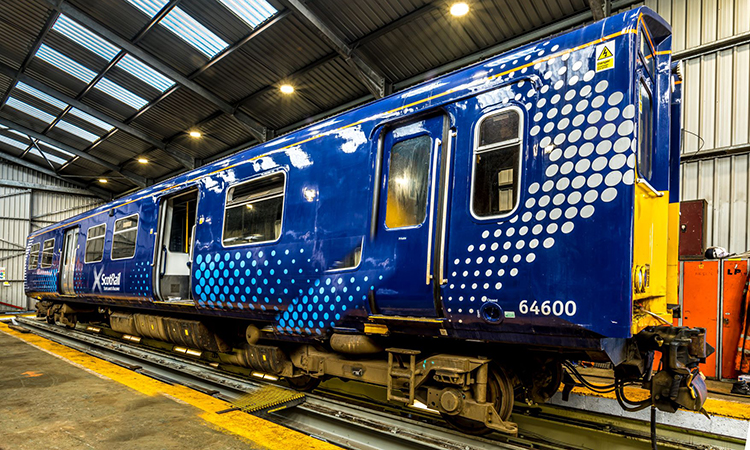 Decarbonisation and sustainable development are the cornerstones of Transport Scotland’s action plan, which sets out the Scottish government’s ambition to phase out diesel trains from its network and deliver zero emission passenger railways by 2035. Large parts of the Scottish network have already been electrified as part of a rolling programme, but, for several remote routes where electrification is not economically viable, hydrogen and battery technology offer complimentary sources of traction.

Large parts of the Scottish network have already been electrified as part of a rolling programme, but, for several remote routes where electrification is not economically viable, hydrogen and battery technology offer complimentary sources of traction.”

In December 2020, hydrogen fuel cell integrator Arcola Energy was appointed to lead a rail supply chain consortium to deliver a production-ready and safety-certified hydrogen power system to demonstrate that hydrogen traction can be safely and effectively used as an alternative for the parts of the Scottish network where electrification is not practical or affordable.

The project will see a retired class 314 electrical multiple unit (EMU) converted to hydrogen traction using Arcola’s proven A-Drive fuel cell powertrain, with an overarching objective of creating opportunities for the Scottish rail supply chain through skills development and industrialisation of the technology.

The conversion is also intended to show the potential of re-powering existing rolling stock to deliver a sustainable zero emission solution to decarbonise Scotland’s geographically diverse network, connecting communities and contributing to a green economic recovery.

A holistic and sustainable approach

Joining forces with Transport Scotland, Scottish Enterprise and the government-funded Hydrogen Accelerator at the University of St Andrews, Arcola Energy and its rail engineering and safety expert partners form an integrated delivery team that is representative of what is needed for the full industrialisation and deployment of hydrogen trains. This includes the rail integration of the technology and standards compliance, a strategy for the network deployment of hydrogen trains whilst, in parallel, developing technology supply chains for the localisation of production jobs.

The option of using converted rolling stock enables network operators to continue the use of their leased units and ensures that the full life of existing diesel multiple units is realised.”

The option of using converted rolling stock enables network operators to continue the use of their leased units and ensures that the full life of existing diesel multiple units (DMUs) is realised. In contrast, the purchase and import of new purpose-built hydrogen units may significantly increase costs, have a longer deployment timescale and cause greater disruption to services. By utilising existing DMUs, the industry can have greater confidence in their conformity with the rest of the railway infrastructure.

In addition to the environmental benefits of transitioning from diesel to zero emission trains, the hydrogen train project is set to deliver wider social benefits. Firstly, communities along the proposed rural routes – many of whom rely on rail for business and employment – stand to benefit from an economic solution to zero emission transport. Secondly, the Scottish hydrogen economy will be presented with a significant opportunity to meet new levels of hydrogen demand, supporting job creation and growth in new ‘hydrogen hubs’ across the country. 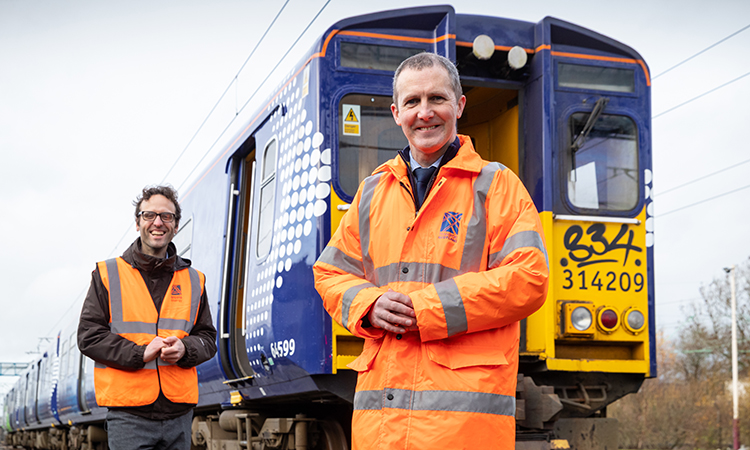 Based on a retired three-car Class 314, the Scottish hydrogen train conversion will fit an Arcola A-Drive fuel cell powertrain with hydrogen tanks and battery modules mounted under each end-coach.

The A-Drive’s key components will be sized for test running on a defined route on the Bo’ness and Kinneil Railway. Incorporating a 70kW fuel cell, hydrogen will be stored in composite cylinders at a pressure of 350 bar with a capacity that is tailored to the requirements of the low speed, 100-mile demonstration route.

Harnessing the strengths of batteries and hydrogen in a hybrid system, the electrical energy store comes from the hydrogen and fuel cell combination, which increases the overall energy density.”

Proven in several heavy-duty transport applications, the A-Drive powertrain platform will be extended to meet rail safety and compliance requirements, enabling Arcola to significantly reduce development time and cost to deliver a complete hydrogen traction solution in less than 10 months.

Harnessing the strengths of batteries and hydrogen in a hybrid system, the electrical energy store comes from the hydrogen and fuel cell combination, which increases the overall energy density. Meanwhile, the power delivery comes from a battery which manages the peak power demands and has the ability to capture regenerative energy, increasing system efficiency. Due to the tight schedule, Arcola is retaining the train’s existing friction braking system in the demonstration phase of the project.

In summary, the battery helps to maximise the efficiency of the hydrogen system and hydrogen is used to reduce the size of the battery.

As the hydrogen train will carry its energy on board, it addresses the cost and practical concerns of electrifying rural routes. Energy is provided to power the train through the reaction between hydrogen (in the onboard tanks) and oxygen (in the ambient air). The only by-product of this reaction is water vapour, resulting in a clean, zero emission alternative to the diesel trains that are currently in operation.

Depending on the route characteristics, long distance journeys can be completed without refuelling. For distances where refuelling is needed, the green hydrogen production sites emerging across Scotland can provide a refuelling network to support reliable services. Critically, hydrogen refuelling is fast – comparable with diesel refuelling times. 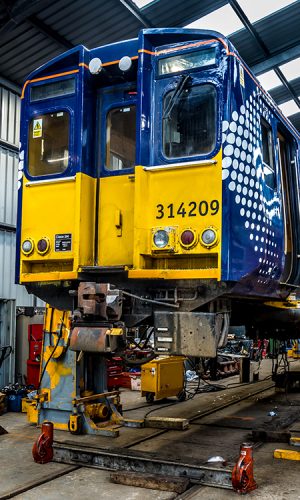 Hydrogen offers a solution for routes that have been identified by Transport Scotland as requiring ‘alternative traction’, meaning that, whilst they need to be decarbonised, electrification is not feasible. These are typically slower, long-distance and rural routes.

Hydrogen traction is also considered an option for so-called ‘transitional routes’, which have been marked for electrification between today and 2035. Rather than continuing to operate diesel trains during the transition, hydrogen can decarbonise routes in a shorter timeframe – and help to meet the 2035 target – whilst the electrification infrastructure is prepared.

Importantly, the route to deployment of hydrogen trains goes hand in hand with Scotland’s electrification strategy. To understand the synergies between the two traction options, the hydrogen train project incorporates an assessment of the lines that offer the best potential for a hydrogen service based on a range of factors, including service patterns, topography, line speed and their proximity to hydrogen production and fuelling locations.

“…the Class 314 is currently being converted to a hydrogen-powered train that will be demonstrated through a series of industry and public events during COP26 in Glasgow.”

The deployment of new technologies opens up opportunities to build a new zero emission transport sector and create local jobs to support a clean, future railway. Arcola’s A-Drive technology platform is an integration of several components and subsystems, many of which are relevant to a wide range of uses in electrified heavy-duty transport. There are supply opportunities for specialist technology developers in areas like batteries and hydrogen storage, but also for established businesses in other sectors such as oil and gas, marine, electronics and defence, as well companies manufacturing to rail or automotive standards.

The hydrogen train project incorporates a dedicated workstream to identify these opportunities for local businesses, primarily in Scotland, but also with an eye to the rest of the UK. As the emerging hydrogen economy continues to expand nationally and internationally, Scotland’s easy access to natural resources has the potential to offer a particular opportunity to nations looking for a green recovery.

Now stabled at its new home at the Bo’ness and Kinneil Railway, the Class 314 is currently being converted to a hydrogen-powered train that will be demonstrated through a series of industry and public events during COP26 (1 November to 12 November 2021) in Glasgow.

Dr Ben Todd has been involved in fuel cells for nearly 20 years. He completed his PhD in engineering at Cambridge University, working on the modelling of the Rolls-Royce solid oxide fuel cell system for power generation. He has worked in several R&D, technical and strategic leadership roles on commercial and public-sector projects, including Cambridge Consultants, Johnson Matthey and Rolls-Royce Fuel Cell Systems. Ben founded Arcola Energy in 2010 with the aim of bridging the gap between the development of new hydrogen technology and deployment-ready applications. 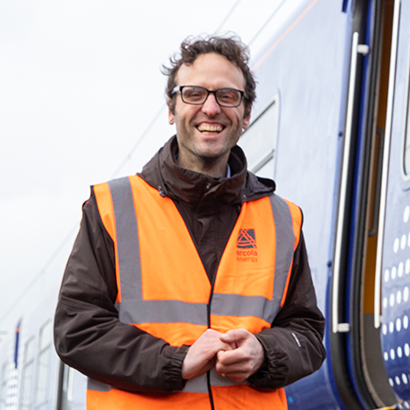