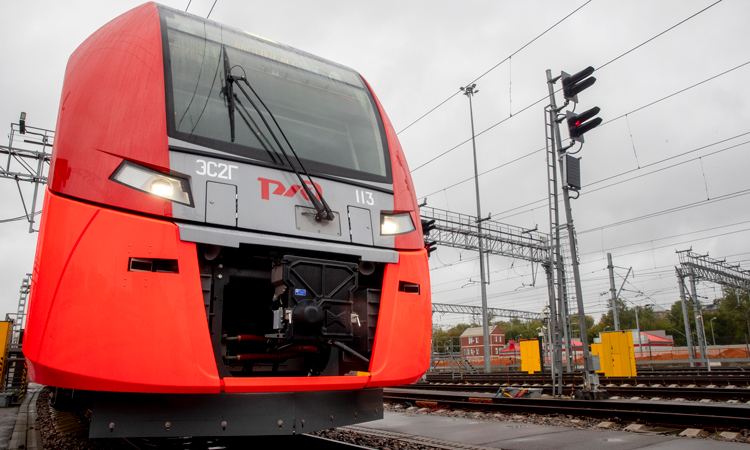 The fast pace of advancements in microprocessors, artificial intelligence and the miniaturisation of laser and optical spatial scanning systems have made it possible to mainstream autonomous vehicles both on roads and railways.

The transportation system of the future – both automatic rolling stock and the necessary infrastructure and personnel – is being added to Russia’s railways.

Russia’s first system of this type was built in 2015 by Russian Railways, together with our foreign partners, to automate the work of Luzhskaya station (Leningrad Oblast). It includes fully automatic TEM-7A switchers carrying out the following operations:

For this, a high-precision digital model of the station and on-board navigation system were developed, and in testing it was possible to reach an accuracy of no more than 10cm when determining the coordinates of the locomotive. Work on automating switchers is continuing, and there are great prospects for replicating it.

The most important testing ground for unmanned technologies is the Moscow Central Circle (MCC), one of Europe’s most passenger-intense lines. Its development went through several stages; in 2016, Lastochka electric trains started running with a six-minute intertrain interval at rush hours and, in November 2019, this was shortened to four minutes. Now, we will switch to a three-minute interval during rush hour and six minutes in off-peak times. Any deviation from the schedule during maximum passenger traffic should not exceed 15 seconds, which requires automating as much as possible.

The multi-circuit automatic control system for electric trains on the MCC will correspond to the highest level of GoA4 automation according to the EN-62290 standard. This system includes rolling stock and infrastructure, including a passenger embarkation/disembarkation system, communications, a remote-control and traffic control centre, and a single dispatch control centre.

Russia’s first Lastochka electric train with an automatic control system is being built by Ural Locomotives LLC together with several Russian companies. A number of unique technical solutions are being developed, including remote-controlled braking and pneumatic equipment, a system for monitoring wrongful passenger behaviour, a new module of automatic doors with security control, and much more. One important part of Russia’s automatic rolling stock control system is how it combines interfaces and data-exchange protocols with the ability to change train configurations, distributed control, and high-precision positioning.

Components are being tested during trial runs of the Lastochka electric train with stages of GoA3+ automation, which implements the main aspects of automating and monitoring rolling stock. The control system of the electric train allows it to interact with infrastructure systems developed for unmanned vehicles, including the operator’s workplace at the remote monitoring and control centre, control systems for limited visibility zones, passenger boarding/disembarking and other automation infrastructure.

The circuit of the automatic control system on an electric train is based on a vision unit for detecting obstacles and an onboard neural network. During tests, the system showed a high detection range for people and large obstacles in the daytime (up to 800 metres). The system’s reaction speed is no more than 0.3 seconds, while that of a human is on average 1.3 seconds. The automatic control system is being developed during field tests, as well as modelled using simulators and digital twins. This work is unique, including modelling sensors, weather conditions, lighting conditions, various classes of obstacles, and debugging algorithms to recognise them.

One important aspect of automatic control is the continuous positioning accuracy of rolling stock in a range of no more than 0.5 metres and the use of 3D electronic maps for pinpoint stops on the platform. This is achieved in a brand‑new high‑precision positioning system under development.

These technologies and solutions are being thoroughly tested by Russian Railways to ensure safety and, for the first time in the world, proof of the safety of a complex artificial intelligence system is being carried out with the simultaneous formation of a regulatory framework together with the Ministry of Transport of the Russian Federation and expert panels.

Another important project being carried out at Russian Railways is the use of intelligent technologies for train collision-avoidance systems (hereinafter referred to as TCAS’s) based on mathematical simulation, a high‑precision coordinate system for rolling stock and infrastructure, smart locomotive systems and trains, built-in diagnostics and reconfiguration of TCAS’s in the case of failures, and digital radio communication.

This makes it possible to optimise the carrying capacity of heavily loaded sections when modernising TCAS’s on the basis of existing infrastructure.

To increase capacity by modernising the TCAS, intervals between trains need to be shortened, i.e., the distance between the locomotive of the second train and the tail car of the first train.

This is possible by using virtual coupling, a combination of controlling trains over the radio channel of successive trains. This technology is based on the use of KLUB-U and BLOK onboard locomotive safety devices, as well as an intelligent system for automatic train guidance with distributed traction (ISAVP‑RT-M), modified to expand the functionality of safety devices, automatic guidance, and digital radio communication.

Lead and locomotive-hauled trains can be controlled automatically and manually by the driver. In this case, the second (hauled) train is guided, taking into account the information continuously received from the first (lead) locomotive: coordinate, length, weight, traffic-light readings, and current and future operating modes.

The hauled locomotive, processing information from the lead locomotive, selects its optimal operational mode. At the same time, the shortest safe distance between the hauled and lead trains is maintained without the use of braking and at the travel speeds set by the safety devices. To calculate the best trajectory, the efficiency of the braking systems on both the locomotive and the hauled trains is continuously calculated. One important aspect for ensuring the security of this technology is the creation of a single universal data carrier: an electronic card.

This automatic driving system, along with modern safety devices, makes it possible to maintain a traffic schedule with an accuracy of one minute and significantly reduces driver workloads in the case of shortened succession times. The equipment used in virtual coupling technology is mass-produced by Russian manufacturers and includes a preinstalled updated version of Russian software.

The result is a three-level system for automatic train operation, which includes the following:

Test drives on the Far Eastern and Transbaikal railways have proven the effectiveness of this technology, primarily by reducing the time spent on connecting/disconnecting trains and decreasing train spacing to six to eight minutes, along with an increase in the speed of trains at yellow traffic lights to over 60km/h, which provides an increase of up to 15 per cent in the throughput of the section, especially during repairs.

Virtual coupling based on digital radio communication will make it possible to control sets of five trains simultaneously in compliance with all safety regulations.

Vladimir Andreev is currently Head of the Technical Policy Department at JSC Russian Railways (RZD). Prior to this, he was Chief Engineer at OJSC High- Speed Railways (2015 to 2018), and held the role of Director General, High- Speed Transportation Directorate between 2014 and 2015. With 29 years’ experience in the rail industry, Vladimir has held a variety of roles since graduating from the Emperor Alexander I St. Petersburg State Transport University, many of which have been working for, or in connection with, Russian Railways.