Following 17 years of construction, the new Gotthard Base Tunnel was ceremonially opened on 1 June 2016. Measuring 57km-long it is not only the longest railway tunnel in the world but is also a unique masterpiece of engineering. Renzo Simoni, CEO of AlpTransit Gotthard Ltd., the company tasked with construction, provides an insight on the colossal tunnel structure work and the different stages of the project. 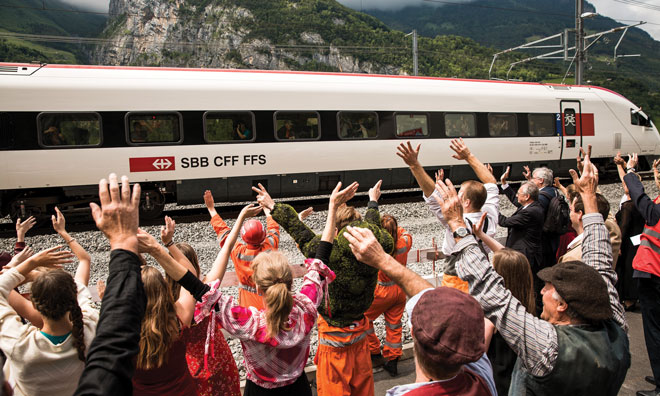 The Gotthard Base Tunnel extends from the north portal at Erstfeld, in the canton of Uri, to the south portal at Bodio, in the canton of Ticino. The main tunnel is 57km-long and consists of two single-track tubes that are 40m apart and connected to each other every 325m by a cross-passage. When all the connecting passages, access adits and shafts are added together, the complete tunnel system measures more than 152km. With a rock overlay of up to 2,300m, the Gotthard Base Tunnel is the world’s deepest railway tunnel and has virtually no gradients, with the highest point lying at 550m above sea level.

Two multifunction stations, beneath Faido and Sedrun, divide both tubes into three sections approximately equal in length. In these multifunction stations the trains can cross over from one tube into the other and stop in an emergency. For construction purposes, the Gotthard Base Tunnel was divided into five sections. To save time and costs, construction work on the individual sections was coordinated and, for some of the time, carried out simultaneously.

To construct the Gotthard Base Tunnel the miners had to cut through highly diverse rock strata: from hard granite to highly fragmented sediments. Eighty percent of the driving in the main tubes was performed by tunnel boring machines and 20% by conventional drilling and blasting. A total of 28.2 million tonnes of excavated rock was transported out of the tunnel. The underground temperature was as high as 45°C. At peak times around 2,400 people worked on the tunnel construction sites, with the work taking place on a 24h three-shift basis. 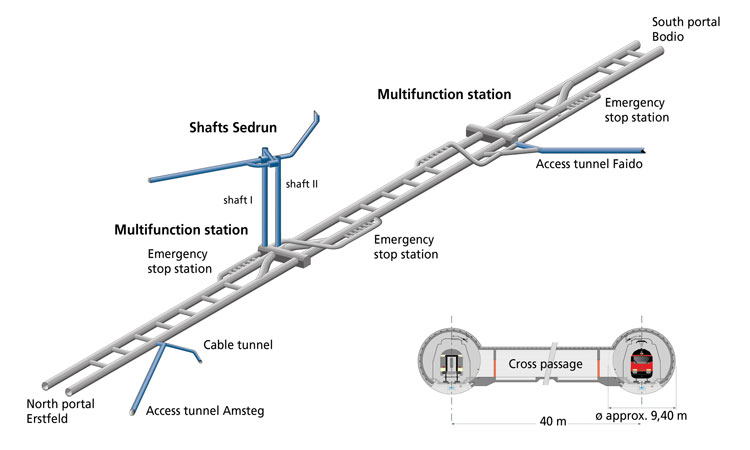 Diagram of the tunnel system under the Gotthard

Despite some surprises, the forecasts of the geologists for the Gotthard Base Tunnel were essentially correct. In the northward drive in the Sedrun section, the Tavetsch Intermediate Massif counted as one of the main risks in construction of the Gotthard Base Tunnel. Thanks to the construction method that was selected, the zone was mastered without problems. The Piora Zone, which was the topic of much discussion at the start of the planning phase, was traversed without difficulty, as was predicted from the results of the system of test bores. According to the geologists’ forecasts, the multifunction station (MFS) at Faido should have been situated in constructionally favourable gneiss. However, during construction of the access adit it became apparent that a large fault zone with squeezing, friable rock was located in the middle of the planned MFS. This led to relocation of the MFS 600m further south, with financial and scheduling consequences.

On 15 October 2010 the world record under the Gotthard became reality: 30km from the south portal and 27km from the north portal, the final breakthrough of the world’s longest railway tunnel took place. The surveyors also achieved a masterly performance: a deviation of only 8cm horizontally and 1cm vertically. To excavate the entire tunnel the miners took a total of around 11 years.

However, work operations in the Gotthard Base Tunnel did not end with the final breakthrough. They continued with fitting-out of the two tunnel tubes. The tunnel-infrastructure specialists equipped the tunnel with mechanical and electromechanical systems such as doors, ventilation systems and drainage systems. These systems ensure that the railway tunnel can be safely operated and maintained.

Installation of the railway systems in the Gotthard Base Tunnel proceeded in several phases. In 2010 and 2011 the west tube at Bodio was fitted-out from the surface installations site at Biasca. From the end of 2011 fitting-out continued from the surface installations site at Erstfeld. From there, the east and west tubes were fitted-out from Erstfeld to Faido. Finally, in 2014, the east tube at Bodio was the last section to be fitted-out with railway infrastructure systems components.

However, the new tunnel also had to be connected with the existing railway network. For this purpose, along a 5km section in the north and a 7km section in the south, auxiliary structures such as bridges and underpasses were built to provide a link from the existing SFR railway line to the tunnel.

Before scheduled train services could travel through the Gotthard Base Tunnel at the end of 2016, between 1 October 2015 and the end of May 2016 all systems had been undergoing thorough tests; test runs had been performed; and the personnel had been trained. In approximately 3,500 test runs the interplay of all tunnel components and systems was thoroughly tested. 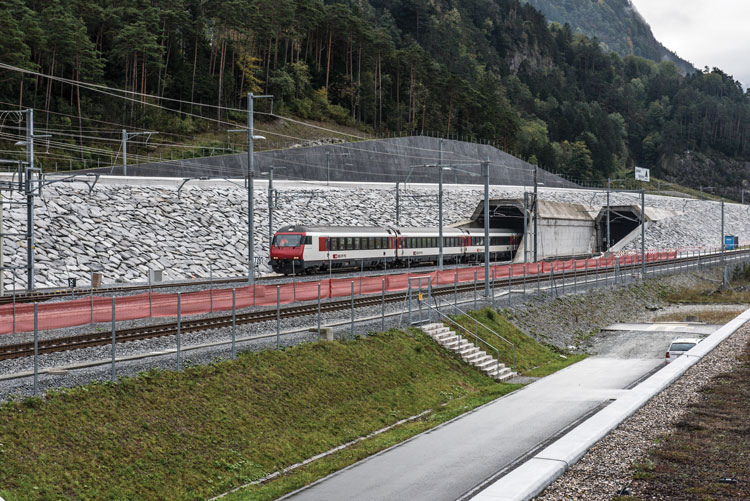 Commissioning the Gotthard Base Tunnel

Commissioning of the major construction project of the Gotthard Base Tunnel is complex and divided into phases. In sub-tests, every component and system is tested for its functionality. The interaction with the tunnel control system and integration into the overall system must also be assured. This was partly achieved during the installation phase of the operating systems.

On 1 October 2015 the test operation phase began and, soon after, the first test runs with the new ETCS Level 2 train control system took place. Tests of the GSM-R digital wireless communication system and the tunnel radio system were performed with the Swiss Federal Railways wireless measurement car. In November and December 2015 the incremental speed tests took place, in which the travel speed was gradually increased to a maximum of 275km/h. During the night of 7/8 November 2015 runs at 230km/h were performed in both tubes and on that of 8/9 November 2015 the maximum speed of 275km/h was reached for the first time in the east tube.

From October 2015 to January 2016 the Gotthard Base Tunnel processes (focussing on normal operation and incident operation) were systematically and successfully tested. The conclusion of these tests was the so-called ‘Big Test’ of 25/26 November 2015, in which incident-operation scenarios were tested with up to eight trains simultaneously.

On 6 February 2016 the deployment in the Gotthard Base Tunnel of a 1,500m-long goods train was tested. The test train was made up of 76 unloaded flat, telescopic and container wagons. The goods train, weighing 2,216 tonnes, was pulled by three Re620 type locomotives, with one each at the front, middle and back of the train. A series of runs were performed to test whether, if necessary, such long goods trains could be guided through the 57km-long Gotthard Base Tunnel with the new ETCS Level 2 train control system without problem. 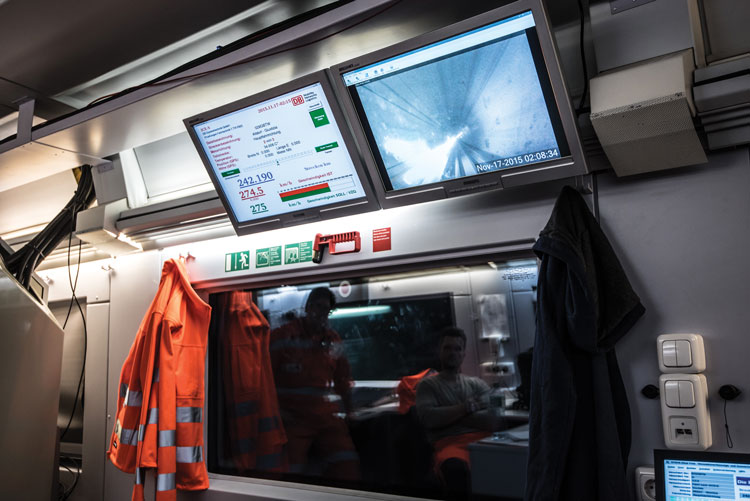 Incremental speed tests with an ICE-S

To enable Swiss Federal Railways to assume principal responsibility from the start of trial operation, activities that, owing to their nature, belonged in the trial operation phase, had to already be performed by ATG during the test operation phase. These included, for example, rescue exercises and tests to prove the efficiency of maintenance.

The activities of the trial operation phase can be divided into the following three groups:

The commercial runs in trial operation will include a stress test with a large number of goods trains. For this purpose the number of runs will be continually increased.

From August 2016 to November 2016 further stress tests will take place with passenger trains.

Differing from many newish high-speed railway lines, which are designed exclusively for high-speed passenger traffic, the Gotthard axis is designed for both goods traffic (up to 110km/h) and passenger traffic (up to 250km/h). This affects not only the safety systems but also the maximum capacity. In a first operating phase the planned traffic mix is for five goods trains and two passenger trains per hour and direction. In the tunnel the principle applies that no maintenance will be performed during commercial operation. The regular maintenance must be performed during the operations-free night-time hours. 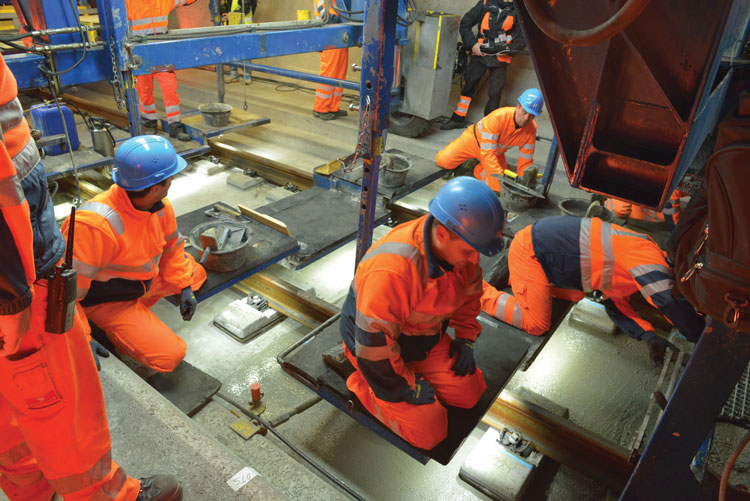 According to current plans, all measures that result from the test runs, the stress tests and the approval and authorisation processes will be completed by December 2016. The world’s longest railway tunnel can then be put into commercial operation with scheduled train services. 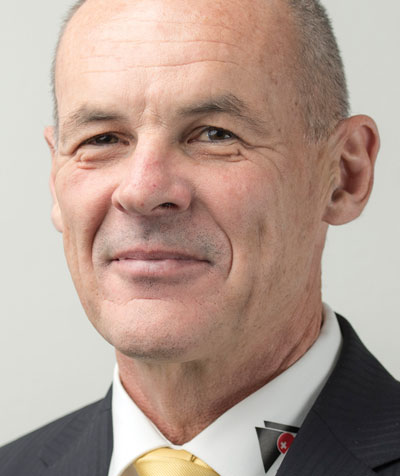