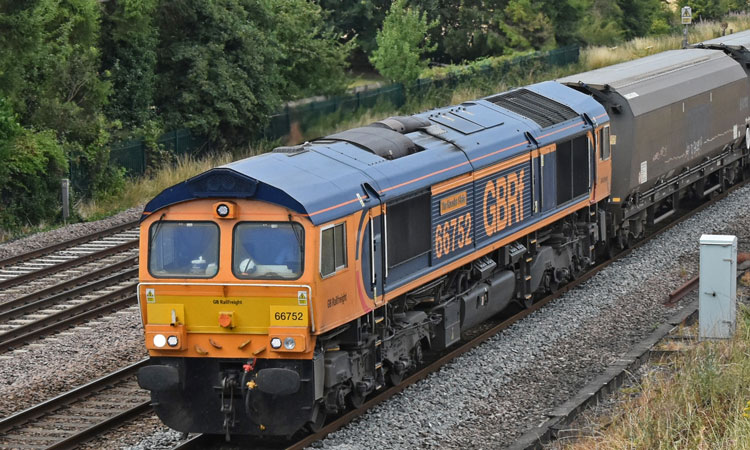 As part of the deal with EKFB (Eiffage, Kier, Ferrovial BAM Nuttall), GBRf will support the training of new train drivers at their new state-of-the-art twin-simulators near Peterborough where the UK’s first and only full-cab freight European Rail Traffic Management System (ERTMS) simulator centre is located.

The announcement follows recent news that GB Railfreight will be moving aggregates in a deal struck with RSS – part of the GRS Group – and Balfour Beatty VINCI.

One hundred box wagons have been procured specifically for Balfour Beatty VINCI to utilise for rail deliveries to construct HS2. GB Railfreight will provide traction, drivers, ground staff and timetabling services to ensure delivery on time, and in full. The source point for aggregate will be a Tarmac quarry in the Derbyshire Peak District, one of the aggregate supply locations that is strategically critical for the supply by rail to support HS2.

The partnership between GBRf and RSS, running up to Christmas, will initially see up to 157 trains deliver 235,000 tonnes of Type 1 aggregate for the first phase of construction work for HS2. Ten trains per week, conveying up to 77 tonnes in 20 box wagons, will transport 1,500 tonnes of product per train. This amounts 15,000 tonnes delivered to site per week. The first trainload has already arrived at Balfour Beatty VINCI’s Washwood Heath construction site. GBRf will act as Facility Operator, essentially operating the railhead. Rail Freight Services (RFS) – also a GRS joint venture with Aggregate Industries – are managing train unloading and material handling.

The announcement reinforces GBRf’s commitment to decarbonise transport and help reduce the UK’s carbon emissions. The transportation of aggregate by rail will eliminate the need for an average of four HGV road movements for every loaded freight wagon. For the services operating to Washwood Heath, moving 3,000 tonnes of aggregate using HGVs would require around 150 trucks, whereas GBRf can transport the same quantity using only two trains. Averaging this over a four-month period, transporting 235,000 tonnes of aggregate would require 11,750 long-distance road movements from the Peak District to Birmingham.

John Smith, Managing Director of GBRf, said: We are thrilled to be unveiling this partnership with RSS. Not only have we delivered the first freight train to an HS2 site since the green light was given to the project, we have also reinforced our commitment over the next few months to continue on this important project. We at GBRf are committed to increasing the amount of goods and materials transported via rail freight, reducing emissions and delivering a more sustainable logistics solution. During the course of the next four months we will be taking 11,750 trucks off the road to transport the 235,000 tonnes of aggregates, meaning GBRf will continue to play a leading role in the decarbonisation of transport and of the UK economy as a whole.”

Jon Fisher, Chief Executive of GRS which operates RSS, said: “Our partnership with GBRf gives RSS unparalleled capability when it comes to supplying the massive volume of aggregate needed for major infrastructure schemes like HS2. We’re proud to have made the first delivery to the project – the time and effort we have invested in planning the delivery of materials to this landmark scheme is beginning to pay off. As a preferred supplier to several sections of HS2 we’re looking forward to working with GBRf throughout the project to deliver bulk materials in the most efficient and cost-effective way possible.”