Construction of the Rail Baltica station at Riga Airport will begin in May 2021 and will be divided into five stages, with completion expected by December 2025. 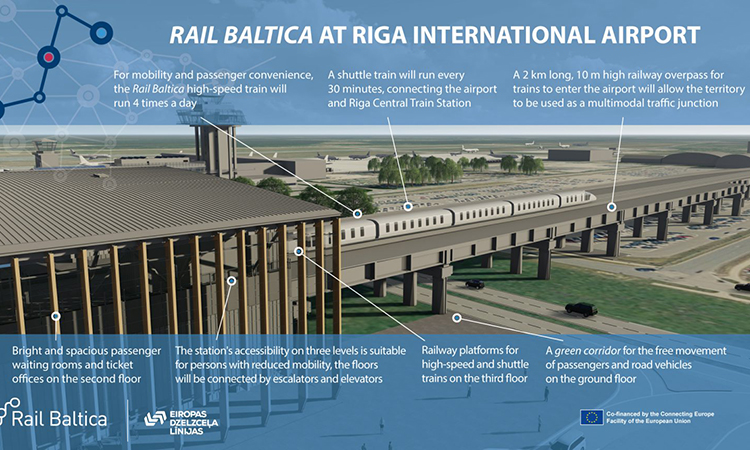 Rail Baltica has announced that a contract has been signed for the construction of a Rail Baltica station and related infrastructure at Riga International Airport, with active construction works set to commence in May 2021.

The construction of the station and its related infrastructure at the airport will be carried out by the winner of the international tender – the consortium B.S.L. Infra, which consists of the Austrian company Swietelsky AG and Latvian construction companies, such as the road construction company SIA Binders and AS LNK Industries.

The construction works are planned to be carried out in five stages through to December 2025. The first stage of work – the construction of Rail Baltica railway infrastructure from the railway station in Imanta, Latvia, to Riga International Airport, as well as the construction of the station terminal – will have to be completed by March/ April 2023.

Latvian Minister of Transport, Tālis Linkaits, said: “Implementation of large infrastructure projects has significant added value. The signing of the construction contract is a positive signal to stimulate the economy, creating hundreds of new jobs over the next five years and boosting national GDP growth. Investments in infrastructure will strengthen Riga’s position as a Baltic aviation hub. This way, ensuring accessible traffic between Riga and other regions of Latvia. In addition, residents of Lithuania and Estonia will also have easier access to the Riga Airport than currently.”

Kaspars Vingris, the Chairman of the Board of Eiropas Dzelzceļa līnijas, the implementing body in Latvia, said: “Construction of the second most important section of Rail Baltica will now begin in Latvia. The construction of both Rail Baltica international stations and regional stations, along with the associated infrastructure, will be the largest construction in the coming years, creating hundreds of jobs. As a result of the construction of this project, in five years time, our residents will have a modern and multifunctional traffic hub, which will be connected to the new passenger terminal at the airport. Mobility and convenience for passengers will be created – tracks, all systems and structures will be fully integrated into the existing airport infrastructure. In addition, the construction of the new infrastructure will provide an opportunity to expand cargo handling services, as it will be possible to establish a freight rail branch connection to the airport. This will strengthen Latvia’s status as an international destination and transit country. This construction project is large, complex, and quite difficult. Thirty-two institutions are being involved in the preparation works, and much of the work is being done in the challenging conditions created by the pandemic. ”

The authorised representative of the consortium B.S.L. Infra, Juris Fridmanis, said: “We are glad that the amount of work invested in preparing our application for the tender has resulted in signing the contract. We are aware of our responsibility that lies within this challenging and historically important work, in which a significant part of the future transportation infrastructure landscape of Latvia will be built. B.S.L. Infra, which consists of one of the leading European construction companies in railway and infrastructure facilities – the Austrian company Swietelsky AG – as well as leading Latvian construction companies, CBF SIA Binders and AS LNK Industries, combines the necessary competencies and resources to implement the project, including the quality of construction of buildings, bridges, roads and railways within the agreed timeframe.” 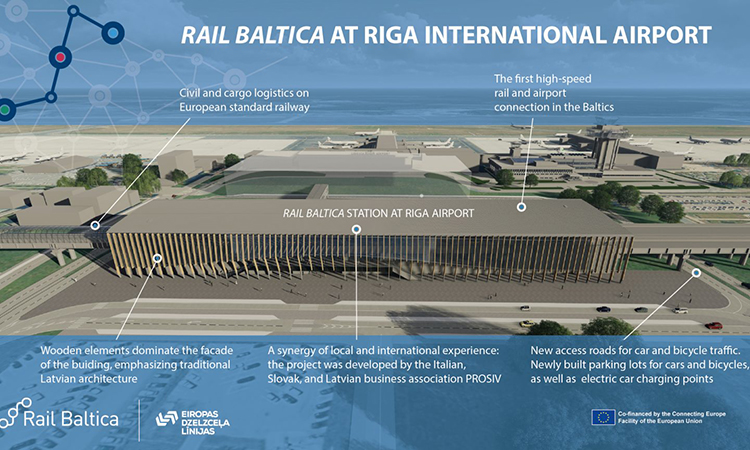 The construction works are divided into five stages, according to the allocated funding, and are to be completed by December 2025. The total amount of the contract is €236,961,150 (excluding VAT).

First, a three-level station building, overpass structures and access roads with related infrastructure will be constructed:

The next stage of work will be the creation of the facade of the station building, carried out by respecting the traditions of Latvian wooden architecture; hence, wood has been chosen as the dominant element of the station facade and facade finishing works. Additionally, for this stage, mechanical systems, interior decoration and improvements will be created.

This will be followed by the construction of an overpass to Riga and Jaunmarupe. In order for the railway to take up less space, Rail Baltica tracks and the station at the Riga Airport will be located on the railway overpass, which will be about 10m high. Such an overpass is unique because, so far, nothing of its kind has been constructed in Latvia. In addition, an embankment and a 113m-long railway crossing over K. Ulmaņa gatve will be created.

The final stage will be the construction of the railway track. It is planned to build two railway tracks so that the Rail Baltica high-speed train could run on the newly built railway line four times a day, as well as a shuttle train every 30 minutes or so that connects the airport and Riga Central Station. This will allow passengers to reach the center of the capital from the airport in only eight minutes.

The construction will be based on the project by the winner of the open international tender – a consortium from three countries PROSIV (Syntagma (Italy), Prodex (Slovakia) and Vector T (Latvia)).