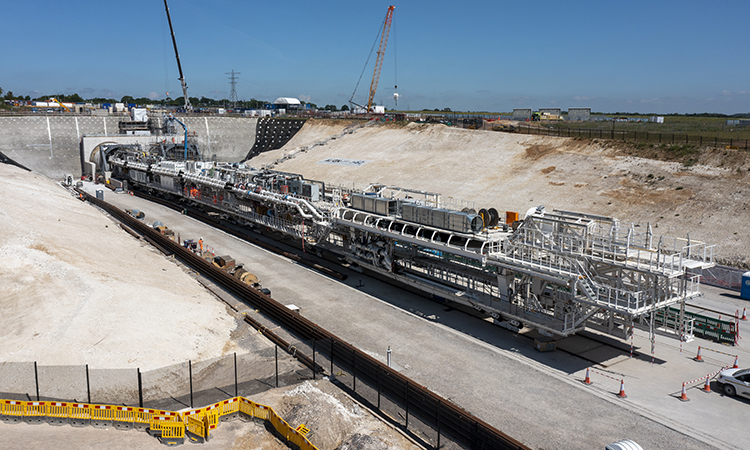 HS2 Ltd has announced the launch of ‘Cecilia’ – the second of two enormous 2,000 tonne tunnelling machines that will excavate the 10-mile-long tunnels beneath the Chiltern hills, just outside of London. The first machine – ‘Florence’ – was launched in May 2021.

Despite starting second, Cecila will run slightly faster, aided by geological data fed back from Florence, meaning that both machines are due to break through at around the same time.

In total, there will be 10 tunnel boring machines (TBMs) working to create 64 miles of tunnel between London and the West Midlands for the high-speed rail project, which is already securing jobs and helping the UK to build back better from the pandemic.

More than 16,000 jobs and over 500 apprenticeships are already being supported by HS2, which is set to transform transport links between Britain’s major cities, free up space on the rail network for more freight and local services and support the UK’s transition to net zero carbon emissions.

The TBM is named after pioneering astronomer and astrophysicist, Cecilia Payne-Gaposchkin, who was born in Buckinghamshire, with the name suggested by pupils at the nearby Chalfont Community College and chosen in a public vote.

It will operate alongside an identical machine, named ‘Florence’, with each machine excavating separate northbound and southbound tunnels, and will help to safeguard the woodland and wildlife habitats above ground.

Welcoming the news, HS2 Ltd’s Delivery Director, David Bennett, said: “The launch of our second tunnelling machine at our South Portal site shows that HS2 is now well on our way to delivering the first and longest tunnel on the project. With more than 16,000 jobs already supported by the project and thousands of companies, big and small, benefiting from contracts, HS2 is providing a major boost to the economy in these difficult times. In the longer term, this transformational rail project will help to link our regions and nations and offer low carbon transport options for generations to come.”

The first two TBMs are operated by HS2’s main works contractor, Align JV – a joint venture formed of Bouygues Travaux Publics, Sir Robert McAlpine, and VolkerFitzpatrick – and launched from a site by the M25 to the north west of London.

Designed specifically for the mix of chalk and flints under the Chilterns, the two identical TBMs are powered by zero carbon electricity and move at a speed of up to 15 metres a day. Each machine operates as a self-contained underground factory – digging the tunnel, lining it with concrete wall segments and grouting them into place. Each tunnel will require 56,000 precision-engineered, fibre-reinforced segments – which will all be made on site.

A crew of 17 people will operate each TBM, working in shifts to keep the machines running 24/7. They will be supported by over 100 people on the surface, managing the logistics and maintaining the smooth progress of the tunnelling operation.

Chalk excavated from the tunnels will be used for landscaping at the south portal site once construction is complete, creating wildlife-rich chalk grassland habitats across 127 hectares of the southern Chiltern hills.

Align JV’s Project Director, Daniel Altier, commented: “We are delighted to be launching Cecilia, the second of our TBMs, to dig the Chiltern tunnels. Both TBMs are identical and include innovations to improve efficiency and the safety of the environment in which the crews will be working that have never before been introduced on any previous TBM, worldwide. I would like to thank everyone in our integrated project team that includes Align, our design partner Align D and HS2, working closely with our suppliers, for all of their hard work that has enabled us to get to where we are today, culminating in the launch of Cecilia.”

Align is recruiting 1,200 personnel in total, including 100 apprentices, to work on the Central 1 Area of HS2 Phase One that it is delivering. Align are targeting their recruitment and investment in upskilling local people who are currently unemployed, with a particular focus on women, the under 25s and those with disabilities.

This is another great example of the vital role that HS2 continues to play in the UK government’s Plan for Jobs to protect, support and create employment, which has helped millions of people to continue to provide for their families during the COVID-19 crisis.