A new West Midlands rail training centre will help upskill industry employees and offer the public rail training, so that local people can play a part in building the region’s expanding rail networks. 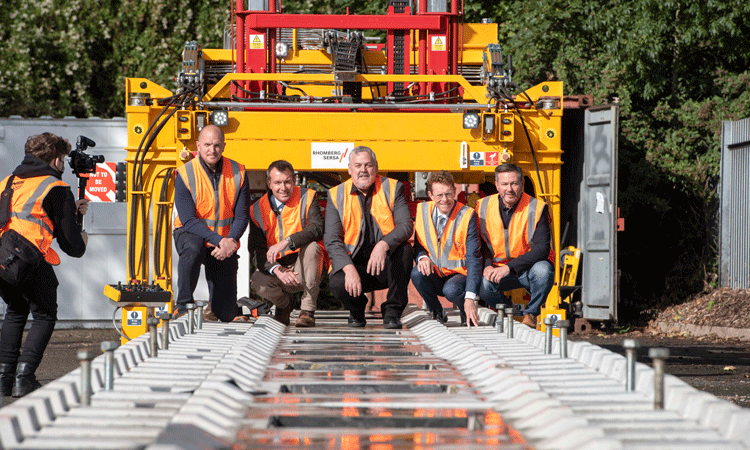 With hundreds of millions of pounds of investment being made into the West Midlands public transport system, a new rail training centre was officially launched on 29 September 2021, so local people have the skills needed to build the region’s expanding tram and train networks.

The centre, at City of Wolverhampton College’s Wellington Road campus in Bilston, boasts more than 40m of railway track so students can get hands-on in learning the skills needed to build and maintain rail lines.

The facility is also the first in the UK to offer training on slab track technology, which is used in the construction of high-speed rail lines like HS2. It will also provide training on traditional rail and tram lines and is equipped with installation and maintenance equipment.

The centre – which was opened by Andy Street, Mayor of the West Midlands alongside Cllr Ian Brookfield, leader of City of Wolverhampton Council – will deliver rail training programmes, from beginner to advanced level, in partnership with National Infrastructure Solutions, a leading training provider in the rail, civil engineering and utilities industries.

Courses are available for newcomers to the sector who want to gain the skills employers are looking for, as well as those already working in the rail industry, who want to upskill and develop their knowledge further.

The centre will also run free rail training courses for people, who are registered as unemployed through a sector-based work academy programme (SWAP). The six-week scheme will offer pre-employment training, on-site work experience and a guaranteed job interview with an industry employer looking to recruit new staff.

The launch comes just days after the West Midlands Combined Authority (WMCA) announced bids to government that could secure further transport investment of up to £2 billion over the next five years to fund new rail lines, stations and tram routes across the region.

This is in addition to new tram lines currently being built in Birmingham and Wolverhampton city centres and between Wednesbury and Brierley Hill, as well as the reopening of the Camp Hill rail line in south Birmingham with new stations at Moseley, Kings Heath and Hazelwell.

The Mayor, who is also chair of the WMCA, said: “We are already seeing unprecedented investment in our transport network with new Metro routes, five new railway stations, state-of-the-art climate-friendly buses, and new cycling and walking infrastructure – all on top of the billions being invested by the government in HS2.

“But these projects are just the start of our plans to revolutionise public transport in the West Midlands, and so with billions of pounds worth of more investments lined up we need to make sure that local people have the skills they need to take advantage of all the jobs that will be created.

“This new Rail Training Centre, in the heart of Wolverhampton with its excellent facilities, will help make that happen.”

The training centre has been developed in partnership with the WMCA, ISS Labour a leading supplier of professional services to the rail industry, Rhomberg Sersa a railway engineering service provider, and Sunbelt Rentals a plant tools and equipment supplier, with personal protective equipment for all students donated by specialist rail supplier Safeaid.

Facilities on the site are due to be further expanded with the installation of a catenary system, enabling overhead line training to be offered by Amey Rail, one of the UK’s principal rail contractors.

Michael Dixon, Head of Faculty for Technology, Creative and Academic Studies at the college, commented: “With the construction of HS2 and improvements to the wider rail network in the West Midlands, there will be an increasing demand for trained rail operatives in the areas.

“The new centre is a further expansion of the services provided at the Wellington Road campus and will enable us to provide high-quality rail training to local people of all ages and abilities, from beginner to advanced level,” added Michael.

“This includes opportunities like our award-winning city centre Interchange where the Metro is being connected directly to the front entrance of our new railway station.

“The Rail Training Centre facilities at City of Wolverhampton College will give unemployed people a clear route into the train and tram sector, boosting skills and adding to the pace of regeneration in the city and the wider region.”

Richard Priest, Midlands Director at Sunbelt Rentals further added: “There are a whole host of exciting careers currently available for local people within the rail, rental and wider construction and infrastructure industries.

“We are proud to help ensure that students learn their skills using the same leading-edge equipment as the main contractors, which helps with their transition to employment once qualified.”

As part of the project the WMCA is providing a funding investment of around £750,000 to train 300 students over next 12 months in rail installation and maintenance including slab track. This is in addition to wider Adult Education Budget funding for conventional rail training, that has already been made available by the WMCA.