Green train travels across Forth Bridge to mark COP26 in Glasgow

The first emission-free fully electric train has crossed the historic Forth Bridge to commemorate COP26 taking place in Glasgow, with action footage revealed by Network Rail and Vivarail. 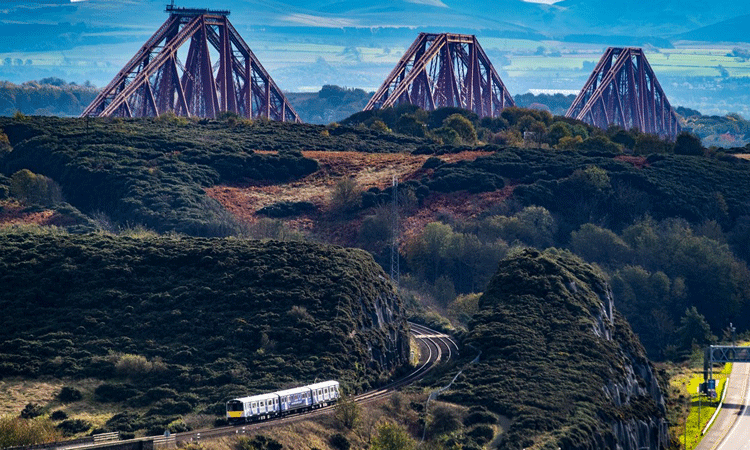 Network Rail and Vivarail have released stunning aerial shots of the first emission-free fully electric train to cross the iconic Forth Bridge as the United Nations Climate Change Conference takes place in Glasgow.

The eyes of the world are on Scotland as world leaders gather to accelerate action towards the goals of the Paris Agreement and the UN Framework Convention on Climate Change.

As part of COP26, Network Rail is demonstrating its commitment to decarbonising Britain’s railway and supporting the UK and Scottish governments’ net-zero goals, with a showcase of two green technologies which are vital to rail’s part in tackling climate change.

Two innovative new trains will run during the conference as part of Network Rail’s Green Trains at the COP26 event, showcasing the range of green ways to power trains including batteries, hydrogen, and electricity.

These technologies have been identified as important elements of plans to make rail even greener, as highlighted in Network Rail’s interim Traction Decarbonisation Network Strategy.

British company Vivarail has designed and manufactured pure battery and battery hybrid trains, as well as innovative charging technology, and their next generation train is capable of achieving a range of up to 100km and recharges in only ten minutes.

The flexibility of batteries mean this package can be used to repurpose good quality diesel units or added to other types of electric train so that they are capable of travelling on parts of the network not yet electrified.

The Forth Bridge cannot have overhead electric lines installed because of the height restrictions, so trains need to have an independent source of power to travel across.