HS2 have revealed designs for the north portal, which cuts noise from trains entering and exiting the Chiltern Tunnel at speeds of up to 320km/h. 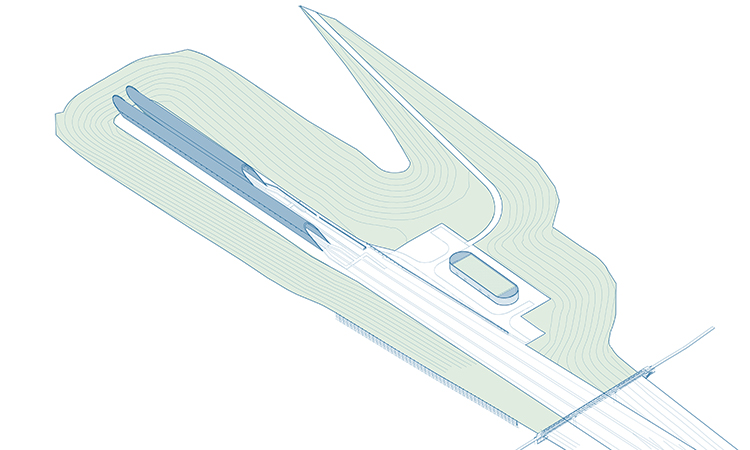 HS2 has revealed the designs for the north portal of the Chiltern Tunnel, which has been specially designed to cut noise from trains entering and exiting the project’s longest tunnel at speeds of up to 320km/h.

Two perforated concrete hoods will cover the track, extending the 10-mile-long tunnel into the open air. These porous portals will avoid sudden changes in air pressure, and resulting noise, caused by trains entering and exiting the tunnels. Set low into the landscape between Great Missenden and South Heath in Buckinghamshire, the portals will only be visible from a footbridge over the railway to the north.

To allow for the different levels of air pressure, the portal for trains entering the tunnel will be 220m long, while the one for those exiting will be just 135m. Both will have smooth concrete on top and textured concrete to a low level, to reduce staining and maintenance. Alongside the portals, there will also be a simple single-storey ancillary building to house mechanical and electrical equipment. HS2 are currently seeking views from the community about the final design, with options including a green roof, split louvred or anodised aluminium façade.

“Once construction is complete, the Chiltern tunnel will take HS2 trains deep under the Chiltern hills, linking London with Birmingham and the North; releasing space for more freight and local services on the existing mainline,” David Emms, Project Client for HS2 Ltd, said. “Set low into the landscape and out of sight for most passers-by, the structures will play a crucial role in cutting out unnecessary noise and housing essential mechanical and electrical equipment.”

The structures have been designed and will be built by HS2 Ltd’s main works contractor Align JV, a team made up of Bouygues Travaux Publics, Sir Robert McAlpine, and VolkerFitzpatrick. Work is well underway, with two enormous 2,000 tonnes tunnel boring machines heading north from the south portal to excavate the twin-bore tunnels. They reached Chalfont St Peter last week and are expected to breakthrough at the north portal in two years’ time.

“Our TBMs, Florence and Cecilia are making good progress and have each completed over 3km on their journey to the north portal,” Alan Price, Design Director for Align JV, said. “We are always very conscious of the sensitive setting for any permanent structures on the project and this includes the north portal design.”

To the north of the tunnel, the new high-speed line will be set into a cutting for 1.8 miles (3km) on its approach to the Wendover Dean Viaduct, with more than 20 hectares of new woodland, shrubs and wildflowers planted to help blend the railway into the surrounding countryside. The species chosen will be typical to the Chilterns including Beech, Oak, Yew, Holly and Dog Rose.

Across this stretch of the line, six new bridges will cross the railway cutting, linking country lanes and historic footpaths to the east and west. New planting will also link existing ancient woodlands alongside of the line, boosting biodiversity and connecting and enhancing existing wildlife habitats.