UK Rail for Ukraine will be sending more than a million items of aid to Ukraine in response to the humanitarian crisis in the region. 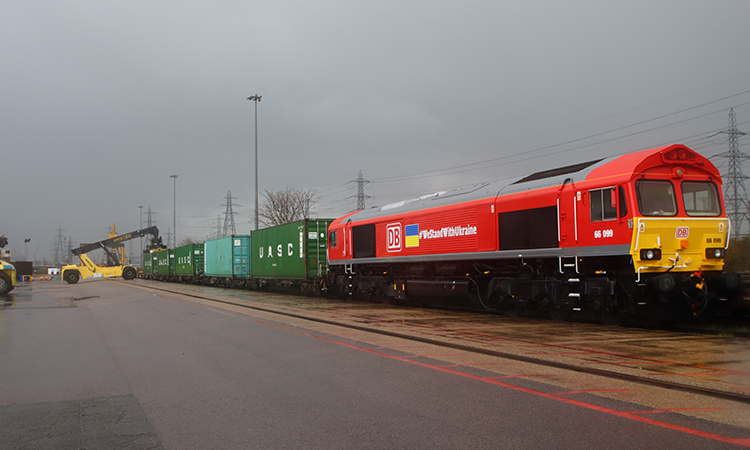 UK Rail for Ukraine, a cross-industry initiative set up by volunteers in early February, has brought together large quantities of humanitarian aid from across the country. The first aid train has left the UK on a special DB Cargo service bound for Ukraine, where it will be received by organisations working on the ground. UK Rail for Ukraine comprises of volunteers from across the railway industry led by a project team including Network Rail, Symposium Consulting, DB Cargo UK, London North Eastern Railway (LNER), Avanti, MTR Elizabeth Line, and The Veterans Charity.

“I am expressing my gratitude to the UK Railway industry and everyone who contributed to the UK Rail for Ukraine initiative,” Vadym Prystaiko, Ukraine’s Ambassador to the United Kingdom, said. “Despite the complexity of the logistic routes, the industry managed to organise a delivery directly to the places of greatest need in Ukraine. In addition to the humanitarian aid gathered by volunteers from different businesses and organisations, UK Railway facilitated the delivery of 21 powerful industrial generators purchased by the Ukrainian Embassy which are imperative for Ukraine’s energy sector.”

“The UK Rail for Ukraine initiative is playing a great role in delivering humanitarian aid from across the country,” Grant Shapps, Transport Secretary, said. “Our exceptional railway network has come together and is working hard to deliver vital supplies to support the inspirational Ukrainian people. The UK continues to stand with all those fleeing Putin’s barbaric invasion.”

The service is carrying more than 1,500 tonnes consisting of a range of aid, including non-perishable food, hygiene and medical products, basic living equipment, and other much-needed supplies that have been donated from a wide range of businesses and organisations following requests for aid from the Ukrainian authorities. Transported in 24 shipping containers over a 500-metre train, the aid has been labelled in all three languages to assist with distribution when it arrives at its destination.

“We have all seen the vital role the railway has played in Ukraine, delivering people to safety, and vital supplies to the front line,” Sir Peter Hendy, chair of Network Rail, said. “Britain’s railway is now playing its small part in supporting the inspirational people of Ukraine.”

“Across Europe, DB Cargo is already leading the way in delivering humanitarian aid by rail to the Ukraine, having recently developed the first rail bridge to the war-torn region,” Andrea Rossi, Chief Executive Officer of DB Cargo UK, said. “Here in the UK, we are pleased to be able to support the ongoing aid effort to deliver essential supplies to ease the suffering of the Ukrainian people impacted and displaced by the atrocities that are unfolding.”