After flood damage caused by Storm Franklin in February, the Cambrian Line between Shrewsbury and Newtown has finally reopened to passengers. 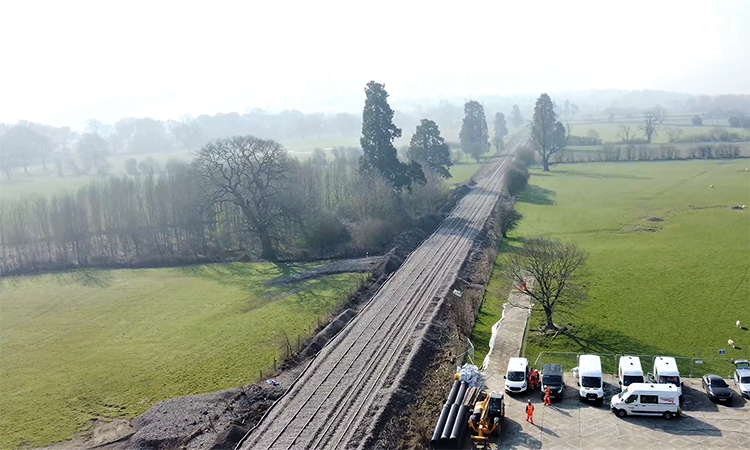 Engineers have worked 24/7 to reopen the Cambrian Line between Shrewsbury and Newtown following flood damage caused by Storm Franklin in February. The stretch of Cambrian Line has been closed to allow vital repairs to take place following extensive flood damage caused by Storm Franklin on Monday, 21 February. Initially, it was thought just 12 areas of ballast (the stones that hold the railway sleepers in place) had been washed away but further investigation revealed 33 severely impacted locations across a half-mile stretch of railway.

The washouts happened after the River Severn flooded, with the water rising 3.9metres above the normal level, just 9cm lower than the highest ever recorded level. It took ten days for the river to fully recede before engineers could move in to repair the railway. Following just six weeks of 24/7 shifts, Network Rail engineers, working alongside contractors AmcoGiffen, have managed to restore the railway, ready for train services to resume on the first weekend of April.

The extensive repair work has included the removal of 3,000 tonnes of debris, 4,000 tonnes of new ballast being laid, three tamping shifts to realign and level the track, 800 metres of double track replaced, new hedgerows planted, clearing of 11 culverts and installation of new fencing and telecoms cables.

“It’s fantastic to be able to fully reopen the Cambrian line for passengers, after the scenes of absolute devastation left in the wake of Storm Franklin,” Bill Kelly, Route Director for Network Rail Wales & Borders, said. “I’d like to thank passengers, and the local community, who’ve shown incredible patience and support, throughout. I’d also like to pay tribute to everyone who’s worked so hard to repair the railway so quickly in such challenging conditions, it really has been an incredible effort.”

“We are delighted to see that the vital link for connectivity to Shrewsbury and beyond on the Cambrian Line has been resurrected in good time and in readiness for the high demand of services over the Easter holidays,” Claire Williams, Partnership Development Officer from the Cambrian Railway Partnership, said. “We would like to thank our colleagues at Network Rail for their tremendous effort to reopen the line as soon as possible given the challenging conditions and devastation of the line outside Welshpool.”

A video which features a time-lapse detailing the repairs can be found below.