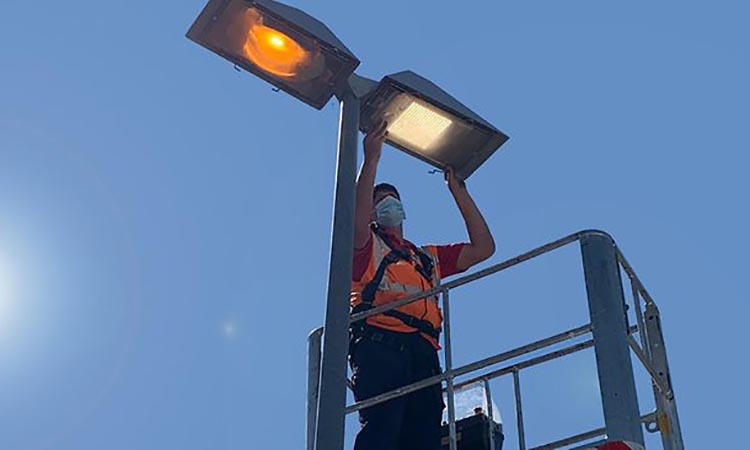 Deutsche Bahn (DB) is converting its lighting to climate-friendly LEDs or other energy-efficient light sources at around 1,000 train stations. This includes platform lights, signs, and showcases. Service technicians have already used thousands of new LEDs at around 750 stations in 2022. Through this, DB is also contributing to saving electricity at its stations.

“This year, we are once again taking a big step forward when it comes to energy-saving lighting,” Bernd Koch, CEO of DB Station & Service AG, said. “By the end of the year, almost half of our train stations will have energy-efficient lighting. At every station that we build or renovate, we always use climate-friendly LED technology. This saves both electricity and CO2, and it shows once again that we are not only climate-friendly on the rails, but also in our stations.”

In the last five years, DB has replaced conventional lighting with LEDs or other energy-efficient light sources at around 1,600 stations. 1,000 more stations will be added in 2022. The replacement saves DB around five gigawatt hours of electricity per year. This corresponds to the annual electricity requirements of around 1,250 four-person households. By replacing the lamps, around 2,700 tonnes of CO2 are saved each year. Another advantage of modern lighting is that it lasts much longer.

DB has already optimised the lighting at most of the large stations, including Essen Hbf, Köln Hbf, Darmstadt Hbf, Rostock Hbf, Berlin-Spandau Bf, Chemnitz Hbf and Rosenheim Hbf. In 2022, the focus has been primarily on small and medium sized stations. DB has consistently relied on modern and energy-efficient lighting technology for the new construction and conversion of station equipment such as signposting systems, signs, showcases or weather shelters.