The UIC has participated in the IEA ‘Future of Rail’ report in New Delhi, which includes a central focus on India, where rail is the dominant mode of transport. 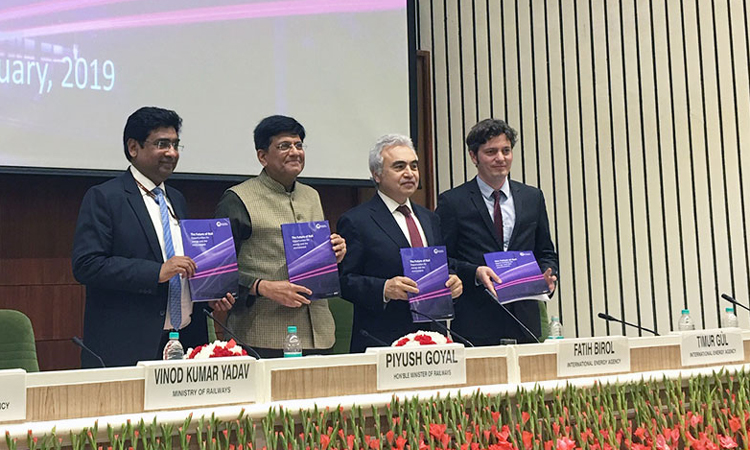 According to a new report by the International Energy Agency (IEA), prepared in cooperation with the International Union of Railways (UIC), rail is among the most energy-efficient modes of transport for freight and passengers, however is often neglected in public debate.

Released in New Delhi by IEA Executive Director, Dr Fatih Birol, the ‘Future of Rail’ report is the latest in the IEA series that focuses on “blind spots” in the energy system.

The transport sector is responsible for almost one-third of final energy demand, nearly two-thirds of oil demand and nearly a quarter of global carbon dioxide emissions from fuel combustion. Therefore, changes in transportation are fundamental to achieving energy transitions. While the rail sector carries eight per cent of the world’s passengers and seven per cent of global freight transport, it represents only two per cent of total transport energy demand, highlighting its efficiency.

“The rail sector can provide substantial benefit to the energy sector as well as the environment,” said Dr Fatih Birol. “By diversifying energy sources and providing more efficient mobility, rail can lower transport energy use and reduce carbon dioxide and local pollutant emissions.”

The Future of Rail includes a Base Scenario that projects the evolution of the railway sector to 2050 on the basis of announced policies, regulations and projects. It also includes a High Rail Scenario to demonstrate the energy and environmental benefits of a more significant shift of passengers and goods to rail transport. While the High Rail Scenario requires about 60 per cent more investment than in the Base Scenario, global CO2 emissions from transport peak in the late 2030s, air pollution is reduced and oil demand is lowered.

Jean-Pierre Loubinoux, Director General of UIC, said: “It is recognised that the sustainable development goals for the global railway sector are achievable, such as: Rail as the safest mode of transport, rail reduces congestion, rail improves access to mobility, railway companies are responsible and attractive employers (rail is the largest employer in India) and last but not least, rail has a low impact on the environment and climate change.

“In the High Rail Scenario, by minimising cost per passenger or tonne kilometre, maximising revenues from stations and ensuring that all modes of transport pay for the negative impacts that they generate (polluter pays principle), an aggressive deployment of rail could lead to a peak of CO2 emissions in transport. This scenario leads to the reduction and shift of 11.5 trillion passenger kilometres from airplanes, cars and two/three-wheelers, and 7.4 trillion tonne kilometres from trucks in 2050.”

Rail remains the primary transport mode in India, providing vital connections within and between cities and regions, and guaranteeing affordable passenger mobility that has long been a government priority. Rail passenger traffic in India has increased by almost 200 per cent since 2000 yet prospects for future growth remain bright. Construction has started on India’s first high-speed rail line, the total length of metro lines is set to more than triple in the next few years, and two dedicated freight corridors are on track to enter operation by 2020.

In all countries the future of the rail sector will be determined by how it responds to both rising transport demand and rising pressure from competing transport modes. Rising incomes and populations in developing and emerging economies, where cities are growing exponentially, are set to lead to strong demand for more efficient, faster and cleaner transportation, but the need for speed and flexibility tend to favour car ownership and air travel.