HS2 Ltd has revealed that the first of 112,000 Chiltern tunnel wall segments have rolled off the production line ahead of the Tunnel Boring Machine launch. 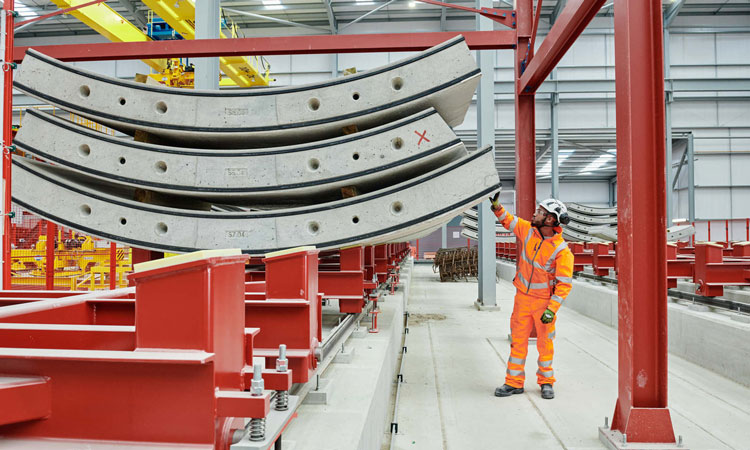 Preparations for the launch of HS2’s first giant tunnelling machines have moved one step closer as the first of 112,000 wall segments for the Chiltern tunnel have rolled off a purpose-built production line.

The project’s first two Tunnel Boring Machines (TBMs) – named Florence and Cecilia – are due to launch in early summer 2021. Each of the 170m-long, 2,000 tonne machines will spend more than three years underground, digging and slotting the wall segments into place to create the 10-mile long tunnels.

Made of high-performance fibre-reinforced concrete, the segments are being produced at a temporary pre-cast factory next to the TBM launch pads at what will be the south portal of the tunnels. This will avoid putting extra HGVs on local roads and ensure a steady supply of segments for the TBMs.

Construction of the Chiltern tunnel, and nearby Colne Valley Viaduct, is being led by HS2’s main works contractor, Align JV – a joint venture made up of three companies: Bouygues Travaux Publics, Sir Robert McAlpine, and VolkerFitzpatrick. Work on the two structures will support around 1,200 jobs. Once construction is complete, the pre-cast factory and the rest of the south portal site, will be cleared, with the chalk excavated from the tunnels used to landscape the site and create high quality chalk grassland and other wildlife habitats.

HS2 Ltd’s C1 Project Director, Rohan Perin, said: “The start of production at the tunnel wall pre-cast plant is a major milestone as we countdown to the launch of our first TBMs later this year. Once complete, the 10-mile long tunnels under the Chilterns will also significantly reduce the impact of the project on the local environment, with material from tunnels used to create new species rich chalk grassland.”

Didier Jacques, Align’s Underground Construction Director, said: “We are using Steel Fibre Reinforced Concrete (SFRC) in the segments due to the improved ductility and durability it offers. The SFRC segments are also easier to fabricate. Once in the moulds we are using robots to polish the concrete, a task that was previously manual, to improve the quality and consistency of the final product. With seven segments in each ring, we will be producing a total of 160 rings ahead of launch of the first TBM later this year.”