Russia’s largest manufacturer of railcars will supply 109 tank cars for methanol to EuroChem, one of the world’s largest producers of mineral fertilizers. 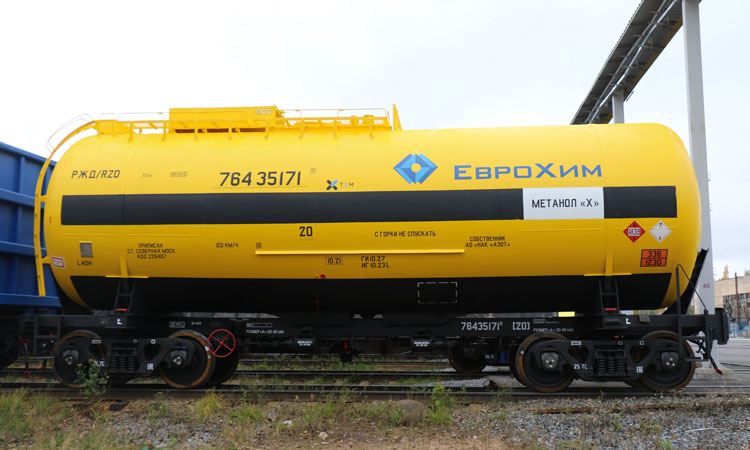 United Wagon Company (UWC), Russia’ largest manufacturer of railcars, will supply 109 tank cars for methanol to EuroChem, one of the world’s largest producers of mineral fertilizers. The railcars are expected to be shipped to the customer by the end of August 2021.

The rolling stock mounted on 25 tonne axle-load bogies will be operated in the fleet of Novomoskovskiy Azot JSC, one of Russia’s largest chemical plants producing nitrogen fertilizers and urea. Together with the delivery under the new contract, EuroChem’s consolidated fleet will include a total of 1,300 railcars. The two companies have been developing their partnership since 2018.

The tank car, Model 15-6880, for transportation of methanol and its derivatives is built to gabarit 1-T. The increased volume of 88m3 of the tank and higher load capacity of 73 tonnes allow this Tikhvin railcar to accommodate almost two tonnes more of freight than can be loaded into its common counterparts. The increased load capacity reduces the empty run charge per freight car, resulting in a reduction in the transportation cost per tonne of freight.

The tank car uses a bent-axis design of the tank, which provides for a slope to the bottom outlet valve to permit a maximum discharge of the tank. There are other advanced technical solutions applied in the design to increase the safety of the railcar. For example, the car tank is equipped with a modern safety valve with a foil rupture disk to prevent increased pressure inside tank reducing the risk of methanol and its vapours being released into the environment.

The Tikhvin railcar is mounted on innovative 18-9855 bogies with an axle load of 25 tonnes giving it a significant competitive advantage in the market. The tank car has increased maintenance intervals of up to one million kilometres or eight years, and a service life of up to 32 years. Similar cars equipped with standard bogies need to undergo their first depot maintenance upon completion of 210,000km or after two years of operation, with the subsequent maintenance to be performed after 110,000km-160,000km (or two years), and their the service life is 24 years.