Europe’s first unique 5G railway technology project begins development at the East-West Gate Intermodal Terminal in Hungary, with aims to be completed by the first quarter of 2022. 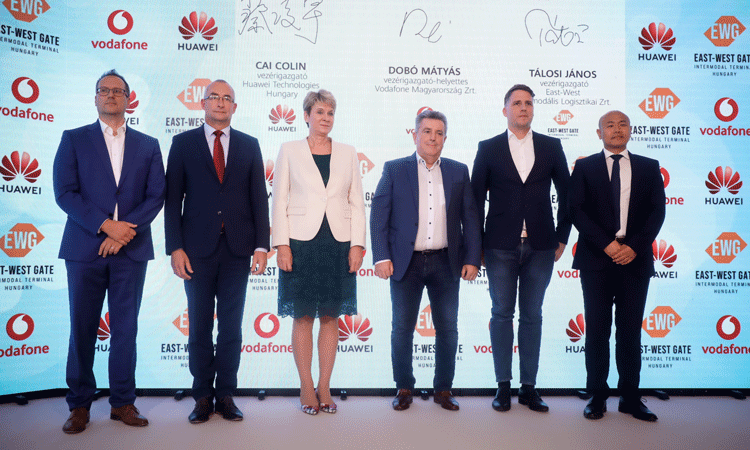 A unique technology development project in rail logistics begins at the East-West Gate Intermodal Terminal (EWG), which is being built in Fényeslitke, Hungary. As the Europe’s largest smart railway logistics terminal, to be completed by the first quarter of 2022, it will be the first terminal on the continent to use a private 5G network for internal communications and the operation of technological devices. In addition, the terminal’s fully automated overhead cranes, which will be able to carry out fine movements too, will also be controlled remotely by means of the 5G technology. The private 5G network will be implemented by Vodafone Hungary and Huawei Technologies Hungary, according to the needs of the investor East-West Intermodal Logistics Services Plc.

East-West Intermodal Logistics Services Plc., Vodafone Hungary and Huawei Technologies Hungary signed an agreement about the implementation of a private industrial 5G network at the intermodal terminal, currently being built in Fényeslitke, Hungary. Dr. Péter Sztáray, State Secretary for Security Policy and Dr. Károly Balázs Solymár, Deputy State Secretary for Digitalisation also attended the signing. The hardware needed for the development project will be provided by Huawei. Platform and network support will be provided by Vodafone Hungary. The project is an important milestone not only in Hungary’s 5G development measures, but in the field of digitalisation of rail freight as well. EWG will be the rail logistics hub of the 21st century in every respect.

EWG will be the first in the Europe to use its own 5G network for internal communications and the operation of its technological devices. It will be the first terminal in the world where the fully automated overhead cranes of the terminal, which will be able to carry out fine movements too, will be remotely controlled by means of the 5G technology – another good example for the possibilities of using 5G in logistics.

János Tálosi, CEO of East-West Intermodal Logistics Services Plc. emphasised, “The construction of East-West Gate will put Hungary on the map of international rail logistics again. The country will be given a new possibility to take an active part in rail freight between Asia and Europe”. He added that the most advanced technologies would be installed at the terminal, thus making freighting faster and more accurate. János said: “The operational efficiency of the terminal can be maximised by using 5G technology. An opportunity for launching R&D projects will also be provided and the industrial application of this technology, which is just breaking into the market, can be presented.”

“5G is considered a new platform worldwide. At the same time, however, its importance is already indisputable; new industrial and logistics business models can be installed on the new generation mobile networks,” commented Mátyás Dobó, Deputy CEO of corporate services at Vodafone Hungary. “They contribute to the development of Hungarian companies, the creation of jobs and – finally – they encourage exports and make our country attractive to companies outsourcing their production. 5G is the first technology which integrates mobile network and business application. For exactly this reason it has been our intention from the beginning to make Hungary one of the most important private 5G network providers in the region, encouraging projects and investments in this field through the collaboration of Hungarian and international partners. The development project, which is being implemented at the East-West Gate Logistics Terminal, is a perfect example of this intention. I am confident that this unique investment, which has mobilised the public and private sector alike, will be followed by many similar projects in the future.”

Colin Cai, CEO of Huawei Technologies Hungary added: “The private 5G networks of our company make digitalisation of completely new branches of industry possible. Huawei has already built many similar systems in China. In Europe, however, this is the first container terminal where a self-driving, remote-controlled solution, which is implemented by means of the 5G technology, will be used.”

He added that high resolution cameras needed large upload bandwidth, whereas the remote control necessitated very low delay. The customised, high data security private 5G network makes wireless real-time remote control on the entire container terminal area possible. Due to the network, efficiency will increase significantly and working conditions will change. In Fényeslitke, for instance, crane operators do not need to sit on the crane the whole day. Following the first Hungarian private 5G network, which was started up at HUAWEI’s Páty site last year (2020), EWG is the next step. HUAWEI set up this 5G network together with Vodafone, within the framework of a partnership. This new investment shows very well that this technology is now available to everyone.

Dr. Péter Sztáray, State Secretary for Security Policy, Ministry of Foreign Affairs and Trade said: “It is the aim of the Hungarian government to make our country a winner of the current changes on the global market. To achieve this goal, we focus on job creation, investments and tax cuts, as they can make Hungary’s economy sustainable and competitive in the long run too. The East-West Gate Terminal, which is being built on the country’s eastern border, and the technological development project, which has just been announced, are very good examples of these efforts. The Ministry of Foreign Affairs and Trade is confident that this cooperation will continue in the future.”

“The government pays great attention to the development of industrial solutions which are based on 5G technology,” commented Dr. Károly Balázs Solymár, Deputy State Secretary for Digitalisation. “The investment in this logistics project, which is now being implemented, is the first significant milestone in this process. We hope that more innovative development projects, applying the most advanced digital technologies, will be implemented in Hungary soon, thus further improving Hungary’s competitiveness. For exactly this reason the government would like to build a partnership with every company which develops, provides or applies state-of-the-art technologies for strengthening Hungary’s economy.”

Construction of the East-West Gate (EWG) Intermodal Terminal began in Fényeslitke, Hungary, next to the Ukrainian-Hungarian border on an area of 85 hectares in January 2021. Through the construction of EWG, Hungary will be given the opportunity to become a key player in the continental freight traffic between Asia and Europe. The facility, to be found where standard and wide-gauge railway meets and which is being built within the framework of a HUF 30 billion private investment, will be put into operation in the first quarter of 2022. The terminal will be able to handle up to one million TEU per year. Regarding its theoretical capacity and area, it will be the biggest-of-its-kind facility on the continent.

In compliance with the requirements of the modern age and EU’s railway and climate strategy, the terminal will pay great attention to the environment during its operation. Implementation of the facility takes place by using green technology. Its energy supply will be based, among others, on a high-performance solar farm and a heat pump system. Only electric terminal tractors and electric cars will be used on the area of the terminal.