Life-saving defibrillators to be installed at 238 GTR train stations 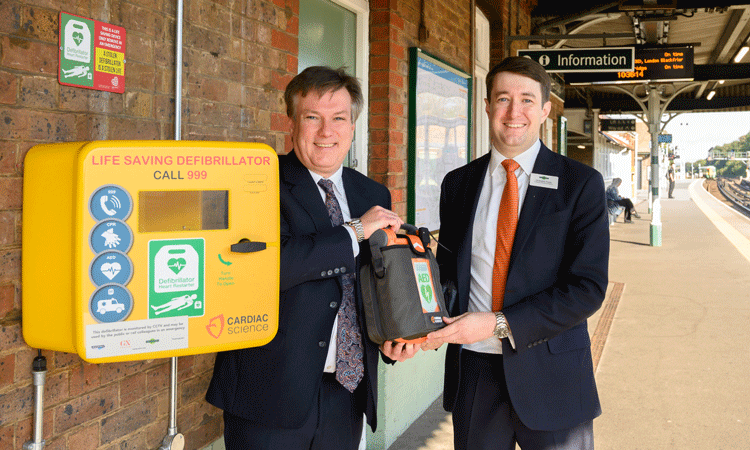 On the eve of Restart A Heart Day (16 October 2021), Great Northern, Southern and Thameslink have announced that they will shortly have publicly-accessible, life-saving automated external defibrillators (AEDs) at every one of their 238 stations, the largest roll-out of heart restarters on the UK’s rail network.

A station assistant has already used one of the devices to save a passenger’s life.

Sussex Heart Charity and other organisations, have supplied many of the original AEDs but the network has now been massively extended and upgraded with more defibrillators as part of a wider £15 million stations improvement programme, which involves over 1,000 projects, many suggested by local passenger and community groups.

More than 30,000 people suffer cardiac arrest out of hospital across the UK every year and fewer than one in 10 survive. However, early chest compressions (CPR) and defibrillation can double the chances of surviving.

Sam Facey, Head of Zero Harm in the Safety & Health team at parent company Govia Thameslink Railway (GTR) said: “By fitting these life-saving AEDs, we believe we’ve made a genuinely positive contribution to the communities across our vast network, which covers London and nine counties.

“All our defibrillators are publicly accessible, so of huge benefit not only to those travelling with us but also the communities we serve. They’re fully automatic – anyone can use them – and our staff are being given familiarisation training.”

The AEDs are ‘smart’, giving verbal instructions and then shocking a patient only if they need it. They also use remote monitoring to sound the alert on dying batteries or out-of-date chest pads and all the cabinets are being wired in – to keep them warm and ready to go.

Sam added: “We’re fitting the same model across our network to provide consistency of quality, staff familiarity and maintenance, and at some stations, where we were updating an existing AED, we’ve been able to return the original device to local charities for use at a second location in the community.”

In an emergency, 999 operatives will shortly know the location of every AED and will direct people to them if they are close enough.

Malcolm Legg, SECAmb’s Community Resilience Lead commented: “SECAmb is delighted GTR is installing such a significant number of defibrillators at its stations. Public access defibrillators are vital life-saving pieces of equipment which everyone should feel confident in using.

“Our call takers will help talk people through what to do if someone requires resuscitation. In this week of Restart A Heart Day, I would encourage everyone to learn CPR. It’s never too late to learn how to save a life.”

“Southern, Thameslink and Great Northern’s rail services keep the heart of our communities beating so it seems fitting to have publicly-available life-saving defibrillators at stations that can restart the heart of someone suffering a cardiac arrest,” added Henry Smith, Crawley MP.

At Potters Bar in Hertfordshire, Station Assistant, Curtis Cassell, used the station AED to save a passenger’s life.

Curtis said: “I ran out and saw the customer on the floor. He was older, in his 60s and someone I recognised as a regular. If there had not been a defibrillator, I don’t know what would have happened – I would think the worst.”

Sue Hampshire, Director of Clinical & Service Development at Resuscitation Council UK commented: “The installation of defibrillators at all Govia Thameslink stations is a fantastic move, and we encourage passengers and the wider community to develop the skills and confidence to use these lifesaving machines. It’s important that people can access defibrillators in busy areas, where they are likely to be needed.

“Restart a Heart, which takes place on or around 16 October 2021, is all about getting hands on and learning essential skills in CPR and defibrillation, and we’d encourage everyone to get involved so they can help someone if they collapse and stop breathing.”