SNCF Voyageurs and Alstom have presented the first French hybrid train for the Occitanie, Grand-Est, Nouvelle-Aquitaine and Centre-Val-de-Loire regions. 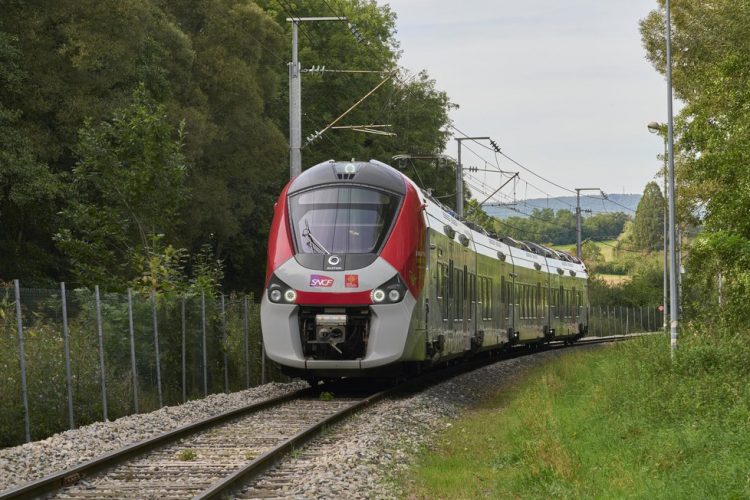 One year after its hybridisation and after eight months of tests, SNCF Voyageurs and Alstom are presenting the first French hybrid train at the Alstom site in Reichshoffen and in the Régions de France headquarters in Paris.

This electric-diesel-battery regional train is the first hybridisation project of a Régiolis train in France. The project was launched in 2018 by SNCF Group and Alstom, with the mobilisation and financial participation of the Occitanie, Grand-Est, Nouvelle-Aquitaine and Centre-Val-de-Loire Regions, and the provision by the Occitanie Region of a train from its liO fleet. The ambition of the project is to contribute to the decarbonisation of the regional trains fleet. The objectives are to reduce energy consumption and greenhouse gas emissions, with a solution that makes it possible to adapt the existing diesel fleet without having to modify the current infrastructure.

“In the battle we are waging on behalf of the regions to decarbonise TERs, we have chosen to invest in hybrid trains, which are a useful solution for reducing CO2 emissions effectively and quickly,” Christophe Fanichet, CEO of SNCF Voyageurs, said. “Alongside hydrogen and biofuel, hybrid trains have their rightful place in the mix of technologies we are banking on in our PLANETER programme to move away from diesel.”

The validation of the energy storage systems at Alstom’s Tarbes site (centre of excellence for green traction systems), at the end of 2020, enabled the first Régiolis train to be hybridised at the beginning of 2021 at the Alstom Reichshoffen site. The hybridisation of the train consisted of replacing half of the diesel engines with energy storage systems made up of lithium-ion batteries. The train was also temporarily equipped with a laboratory coach and sensors to measure the train’s energy flows.

Equipped with its two energy storage systems and its laboratory coach, the train started its tests in 2021. A static and dynamic tuning phase at up to 60km/h took place in Reichshoffen to check the train’s operations and test its hybrid traction mode. The tests then continued at the Velim test centre in the Czech Republic, with validation and certification tests at up to 160km/h. All the train’s new traction modes were tested at high speed and the route simulation models were validated.

The tests showed that the train performed as expected. The rate of energy recycling during braking, which is used to recharge the batteries, is very high, over 90 per cent, allowing energy savings of up to 20 per cent, depending on the itinerary.

“The trials of the first Régiolis hybrid train demonstrate that hybridisation of diesel trains is a realistic solution, both technically and economically, to reduce energy consumption and greenhouse gas emissions,” Jean-Baptiste Eyméoud, President of Alstom France, said. “Alstom is particularly proud to contribute with SNCF and the Occitanie, Grand-Est, Nouvelle-Aquitaine and Centre-Val-de-Loire regions to a cleaner and more sustainable mobility.”

With a range of around 20 kilometres, the zero-emission mode allows the train to run without using combustion engines, this feature will be tested in commercial service to reduce pollution in certain urban areas. The hybrid Regional Train will have the same autonomy on non-electrified lines as the dual-mode diesel-electric version, up to 1,000 kilometres.

“The skills of the SNCF and Alstom technical teams have made it possible to meet the challenge of integrating an innovative traction chain into existing equipment, thus paving the way for the decarbonisation of regional trains,” Carole Desnost, Group Director of Technology, Innovation and Projects for SNCF, said. “To offer the regions other alternatives to diesel by 2024-2025, we are also working on other solutions, such as hydrogen and battery-powered trains, as well as the partial electrification of lines.”