The two-car hydrogen-powered trainset will be presented to the public in the spring of 2022, with pilot tests beginning from mid-2023 on Bayerische Regiobahn routes. 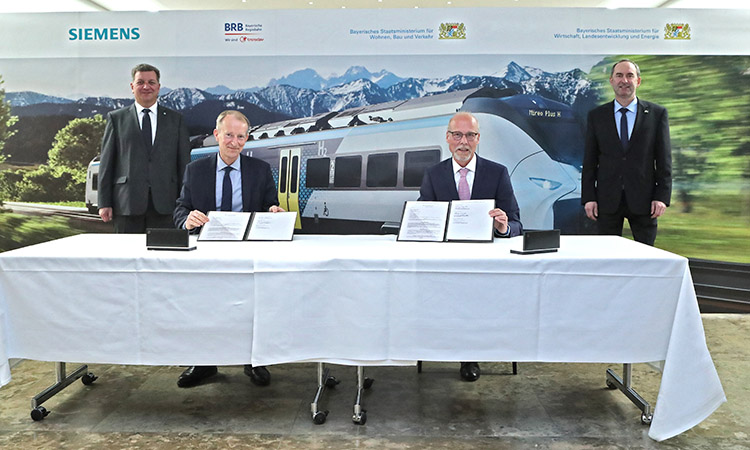 The first hydrogen-powered train for Bavaria is taking form. Representatives of Siemens Mobility and Bayerische Regiobahn (BRB) have signed a leasing contract for the innovative prototype in the presence of Bavaria’s Economic Affairs Minister Hubert Aiwanger and Bavaria’s Transport Minister Christian Bernreiter. The contract is a follow-up to the letter of intent signed by all the participants in July 2021.

The two-car hydrogen-powered trainset of the latest generation will be presented to the public in the spring of 2022. The train will be tested on the Augsburg-Füssen route, among others, beginning in mid-2023. Pilot operations in the rail network of Bayerische Regiobahn (BRB) are initially planned for 30 months. The train is expected to officially enter passenger service as of January 2024.

“Green hydrogen is becoming a key pillar for comprehensive climate protection in the areas of transportation, industry and energy,” Hubert Aiwanger, Economic Affairs Minister of Bavaria, said. “This train is an important part of this strategy towards a transport turnaround with hydrogen, which is why we are promoting this project. I am convinced that with green hydrogen propulsions we can significantly reduce pollutant emissions in heavy-duty and rail transport and contribute to decarbonisation. The one-sided dependence on energy supplies can also be reduced and spread across many regions of the world.”

“We are working closely with our partners to get this lighthouse project under way because we’re convinced hydrogen propulsion can also contribute to attractive and even climate-neutral passenger rail transport,” Christian Bernreiter, Transport Minister for Bavaria, said. “Our goal is to achieve this by 2040 at the latest. Bavaria’s support of the pilot project with funding of several million euros is more than well-invested.”

“We are very much looking forward to the test operations in our rail network and the know-how we gain for using hydrogen technology in the rail sector,” Arnulf Schuchmann, Managing Director of Bayerische Regiobahn, said. “Together with the Transdev Group, to which we belong, and our entire on-site team, we will prepare the project in the best possible way in order to ensure a smooth test start next year.”

The hydrogen-powered train is being developed on the basis of the Mireo Plus platform from Siemens Mobility. The main component of the hydrogen traction drive are roof-mounted fuel cells. The system includes the latest generation of underfloor batteries supplied by the battery specialist Saft. The hydrogen-powered train adapts the successful Mireo regional train platform that is available as a battery-powered version as well as with a conventional electric drive. The development of alternative drives for use in rail transport is part of Siemens Mobility’s overall sustainability drive. The company is a pioneer in the field of sustainable mobility.