Network Rail staff have come to the aid of rail colleagues in Ukraine by delivering equipment that will help keep Ukrainian railways running. 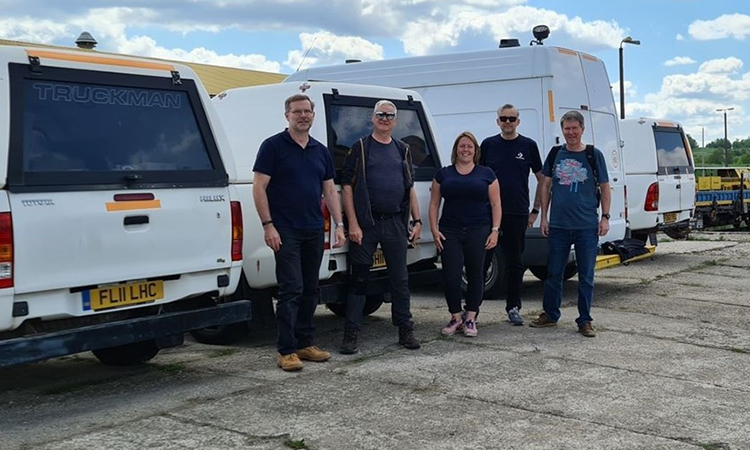 Network Rail staff have come to the aid of rail colleagues in Ukraine after delivering a convoy of vehicles loaded with equipment to help keep the Ukrainian railway running. Ukrainian Railways, Ukrzaliznytsia, requested help from the international railway family via the International Union of Railways (UIC). They needed equipment and spares to help keep their railway running to provide vital evacuation routes and humanitarian aid following the invasion by Russia, all while facing significant damage to railway infrastructure and obvious safety risks for workers. Helped by partners in the supply chain, Network Rail heeded the call and donated four vehicles, loaded with spares and railway tools including generators, drills, jacks and cutting equipment.

“We didn’t hesitate when the request for help came through,” Allan Spence, Director of Regulator Liaison for Network Rail, said. “We took the vehicles loaded with much needed equipment, to a depot near the Polish-Ukrainian border. We had lots of help along the way, like complimentary travel through the channel tunnel, radios loaned by High Motive and help to get back from Polish Railways (PKP). The loads we took included lots of kit from our contractors.”

“It’s inspiring that Network Rail have used their knowledge and expertise to help keep the Ukrainian railways moving by providing vital equipment and aid for their evacuation routes,” Grant Shapps, Transport Secretary, said. “Our fantastic transport network continues to demonstrate huge amounts of support and generosity to those fleeing Putin’s brutal invasion.”

Five Network Rail staff drove the four vehicles through six countries, covering some 2,000km in three days to Poland. However, the final part of the journey, across the border into Ukraine, is being managed by Polish Railways.  This is not the first time that Britain’s railway industry has come to the aid of Ukraine. Previously, UK Rail for Ukraine brought together a train-load of humanitarian aid donated from many businesses to help the many displaced and at-risk victims of the war.