During CER’s 70th General Assembly, leading CEOs from across the European rail industry came together to discuss future priorities and announce the latest updates to CER’s Management Board and Executive Directorship. 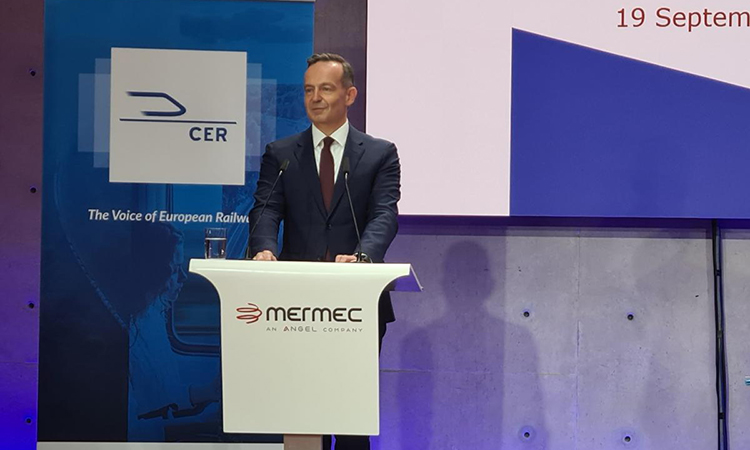 On 19 September 2022 in Berlin, Europe’s leading rail CEOs came together – on the occasion of the 70th General Assembly of the Community of European Railway and Infrastructure Companies (CER) – to assess and define the priorities for the association’s work in 2023.

Dr. Volker Wissing, German Federal Minister of Digital and Transport, joined the association’s bi-annual statutory meeting for a fruitful exchange of views on railway policies. Also addressing the Assembly was Oleksandr Kamyshin, CEO of Ukrainian Railways, who spoke of Ukraine’s absolute commitment to maintaining a functional rail service in this difficult time, and expressed sincere gratitude for the ongoing support of the European railway community.

CER’s Management Board and Executive Directorship

The mandate of current Executive Director, Dr. Alberto Mazzola, was renewed for a further two-year tenure. The General Assembly also confirmed a new vice-Chair and one new member to the CER Management Committee (MC), which is now composed as follows:

Chair of CER and CEO of Austrian Federal Railways (ÖBB), Andreas Matthä, said: ”It is important that the CER Management Committee has a regional balance, reflects different priorities, and stands for diversity. SNCB’s CEO, Sophie Dutordoir, will represent our railway interests as the new CER Vice-Chair and will serve as an excellent role model for all women in the rail sector. I am also pleased that the new CEO of MÁV, Zoltán Pafféri, will continue MÁV’s European commitment in the CER Management Committee.”

CER‘s Executive Director, Alberto Mazzola, said: “I would like to sincerely thank the CER members and Chair for their continued trust and support. It has been a demanding two years for the sector, with the COVID-19 pandemic, the war in Ukraine and the current energy crisis providing many challenges. However, rail has and will continue to prove its resilience and its credentials as the backbone of sustainable mobility. We look forward to a successful TEN-T agreement and to crucial investment in railways, which will allow rail to meet its full potential and play a key role in meeting the ambitious objectives of the EU Green Deal.”

Coronavirus/COVID-19, The Workforce, Women in Rail

Coronavirus/COVID-19, The Workforce, Women in Rail